I was recently sent a group Facebook question asking me to name one thing I'm thankful for that isn't cliché or traditional. Other people were coming back with beautiful sentiments about new friendships, the help of strangers, and averting disasters, which in my opinion wasn't really following the rules at all. If that's not the traditional stuff, then what is?

I didn't respond because everything I thought of seemed trite, superficial, and a tad less profound -- even though I'm pretty sure that was the point. Whatever, Facebook people who don't follow directions.

Well, I did write a list because these things totally deserve thanks, in my book and you'll probably agree -- just refrain from saying them around the dinner table.

1. I am thankful for the dimmer switch in my bedroom.

2. I am thankful my kids can't decode my Momisms, like the fact that "Let's play the quiet game" really means: "Stop talking, my ears are bleeding." Or "One day you'll thank me" really means: "Hopefully, we'll all forget this ever happened."

3. I am thankful my daughter has not lost faith in the tooth fairy, and my son goes along with it.

4. I am thankful that I don't look anything like the portraits my kids draw of me, seriously... they're pretty bad.

5. I am thankful that I haven't had to clean up pee (kid's, pet's, or otherwise) once this week.

6. I am thankful for those awesome skinny hangers that make my closet seem bigger.

7. I am thankful that on my last date night I stayed out past 10, which means I didn't have to circle the block five times to make sure the kiddos were asleep and the sitter didn't look down on us for being so lame.

8. I am thankful for stars like Courteney Cox, Jennifer Aniston, Heidi Klum, and J.Lo, who make being 40 seem not so old.

9. I am thankful sweetener packets can be used as makeshift floss -- in a pinch.

10. I am thankful my kids are finally at an age where they'll watch my shows with me, instead of making me watch their shows with them. I'm pretty sure Disney XD was causing my brain to atrophy.

11. I am thankful that my son still waves to me when a bunch of his friends are huddled together at the bus stop.

12. I'm thankful I can still get away with some bold-faced Mommy lies like: "I'm sorry the arcade is closed on Sundays" or "Harry Styles hates girls who don't listen to their parents."

13. I'm thankful for Jon Hamm and his massive package -- which has made me consider converting. What? Hamm isn't kosher.

14. I am thankful for The Voice, but mostly Adam Levine because he's not only the sexiest man alive, but also the Jewish mom's Jon Hamm.

15. I am thankful that there's a pair of tweezers in my car.

16. I am thankful for my besties, who will tell me if my butt looks fat when it actually looks fat, or pretend they need me to fix their bra strap, to save me from a tedious conversation.

17. I am thankful my kids are old enough to figure out how to buckle seatbelts, wipe themselves, and use step stools to reach things.

18. I am thankful they ask me to lie with them at bedtime, despite their self-sufficiency.

19. I am thankful for Netflix, which allows me to watch shows that started six seasons ago and end in a month. (I will be more thankful when there is a Netflix Anonymous.)

20. I am thankful I haven't tripped over or stepped on: a Lego, Barbie, ball, skateboard, drum stick, puzzle piece, My Little Pony, or something from a Happy Meal even once today (that may be a record).

21. I am thankful Deep Lichen Green is the new black -- it's really the unsung hero of slimming colors that one can barely pronounce.

23. I am thankful that no one judges me when I'm at carpool, or Starbucks, or the grocery store -- braless, wearing Uggs and pajama pants -- which probably isn't true, because I totally judge them.

24. I am thankful my kids haven't realized that I have no clue what I'm doing.

25. I am thankful for the $20 bill I found in my jeans yesterday -- that's always exciting.

Don't get me wrong, I'm beyond thankful for traditional stuff as well, but it's super cathartic to mention the stuff that might get you kicked out of Thanksgiving dinner.

Try it, I promise not to judge. What is the most nontraditional/superficial thing you're thankful for? 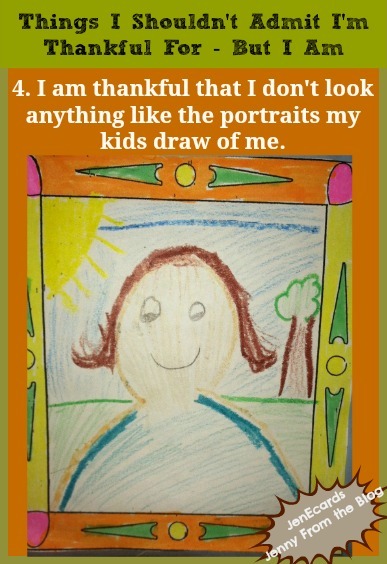 21 Lies Moms Tell Their Kids
Momisms Translated: What They REALLY Mean
20 Things Women Would Do For Their Besties
40 Things Every Woman Should Have or Know by Forty