The twenty-fifth anniversary of the Exxon Valdez oil spill (EVOS) is upon us as the United States Government faces critical decisions about oil and gas development in Alaska's Arctic Ocean. On March 24, 1989, an oil tanker destined for Long Beach, California from Alaska's Alyeska Pipeline terminal in Valdez, Alaska hit a reef and spewed close to 11 million gallons of oil into the nearly pristine Prince William Sound. In mere days, this Alaskan coastline was coated with oil and marred for years by the second largest oil spill in U.S. history.

In the days, months, and years following the spill, 10,000 workers, 1,000 boats, and roughly 100 airplanes and helicopters responded to clean the 1,300 miles of Alaskan coastline hit with crude oil. Casualties of marine species included around 2,800 sea otters, 300 harbor seals, 900 bald eagles, and hundreds of thousands of seabirds that were directly killed by the spill. Graphic images of animals suffocating under a blanket of thick black oil splashed across national news. Commercial fishing in the region halted, causing $300 million of direct economic harm to more than 32,000 people whose livelihoods depend on fishing. In the year after the spill, tourism spending decreased by 35 percent for the southwest region of Alaska. To this day, populations of killer whales, seabirds, and other species have not yet recovered in the Sound.

In the past 25 years, while strides have been made in technology to extract oil in hard to reach places (like the mile-deep name of the Deepwater Horizon site), very little has changed about our ability to recover spilled oil (which in Exxon's case only amounted to 8 percent from the sea surface). Twenty five years ago, Exxon was reckless and government oversight was inadequate. The human error and other circumstances that resulted in the spill were avoidable. Under the command of a reportedly inebriated captain and a lack of adequate navigation equipment, the single-hulled 986-foot vessel strayed outside of shipping lanes to avoid icebergs but instead crashed directly into the well-marked Bligh Reef. With such high stakes, our government had no business enabling Exxon to be so casual about the safety and livelihood of Alaska's coastal communities and marine ecosystems.

While there were some improvements in safety as a result of the Oil Pollution Act of 1990 to help prevent another spill like the Exxon Valdez, little has improved in actual technology to clean up oil spills in the ocean. This was glaringly evident in the Deepwater Horizon disaster in 2010 -- the full effects of which are still coming to light.

In both EVOS and Deepwater Horizon, human error, inadequate equipment and government oversight led to tragic results and millions of gallons of oil in our oceans. While our government took minor steps to improve the safety of oil and gas exploration and development activities, the requirements and oversight are still woefully inadequate, especially when considering the enormous risks of drilling in the Arctic Ocean waters off Alaska. Shell's 2012 blunder-ridden attempt to drill oil wells offshore in the Beaufort and Chukchi seas suffered from the same human error, improperly functioning equipment, and inadequate government oversight that were the root cause of the two largest oil spills in U.S. history. In addition, the Ninth Circuit Court of Appeals has now invalidated Lease Sale 193 in the Chukchi Sea because the government failed to adequately evaluate the adverse impacts that selling leases could have on the Arctic Ocean.

Simply put, right now, offshore Arctic drilling is entirely too risky. We learned from EVOS and Deepwater Horizon that once oil is in the water, there is very little we can do. In the U.S. Arctic Ocean there is the opportunity to learn from the mistakes of the past and avoid another disaster. A time out from further offshore oil and gas activities is needed unless and until clear and adequate standards, regulations, and oversight are in place that ensure activities will be carried out safely and without jeopardizing the health of the environment or opportunities for subsistence. To do otherwise would be irresponsible. 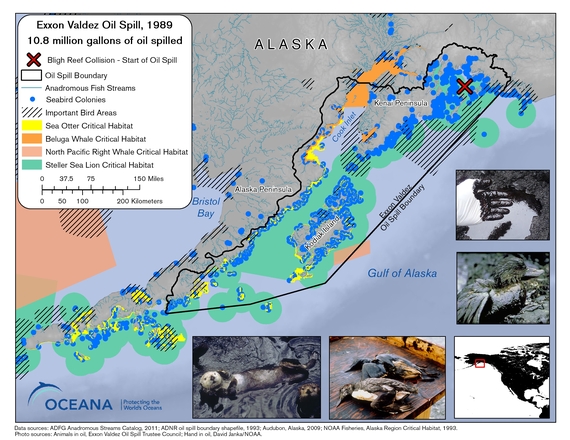