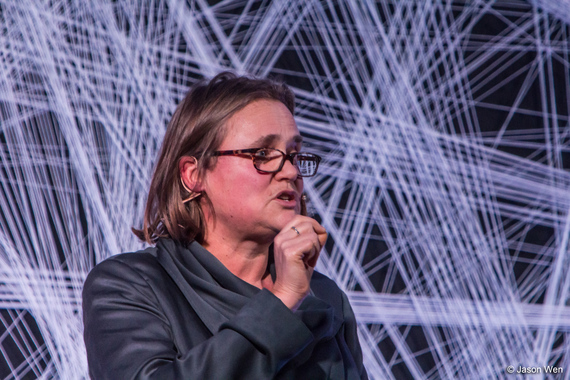 I started Common Purpose when I was 29, I am now 57! Stuck with it all these years because I am as passionate about leadership and citizenship now as I was at 29. And because as we have grown -- we are now said to be the largest leadership development organization in the world -- my role has evolved, so I feel that I have "moved" jobs regularly over the years.

There has been plenty of success, however, the pitfalls have been huge and painful. Forgiving myself for them has always been more difficult than forgiving others who have been part of them. The trouble is that there are so many mistakes, it's hard to choose the highlights, so I have settled on just three: deep ones.

At the start of the financial crash, I remember asking the board what the secrets were to survival. Their answer was to cut early and deep and then to accelerate out at the right moment, and to be ready to really accelerate (even if bruised, you didn't really want to take any more risks).

We did move early and it worked, but as the recession got deeper, we should have trimmed ourselves a second time and moved out of less sustainable areas much sooner than we did. We nearly collapsed as a result. However, we held our nerve (there was a very tough summer when even I, who never loses a moment's sleep, almost lost sleep) and we came through stronger.

We did then accelerate at the right moment, being bold even if we didn't quite feel it and it worked. We have grown at a huge rate ever since.

I have five kids and a very happy marriage and so I split my life in two and value privacy quite a lot. Sure I make speeches but, especially when the kids were small, I tended to have a low profile. Added to this, I have always worried about the number of social enterprises that make loads of noise and then don't make much happen.

So we never put big resources into marketing and communication for Common Purpose, we just focused on doing our work well. I realized late that as Common Purpose grew and grew, the option of me being private and the organization being heads down, was not really there.

Indeed, if we didn't have a strong voice, especially in these days of the internet, then others would tell our story for us and not always accurately, even sometimes outrageously. So over the last six years, I, and we, have changed this dramatically.

I have made regular mistakes on appointments. I tend to appoint and promote on gut and on potential and because I have deep belief in people, I tend to give them their heads. In most cases this is a delicious combination and people thrive and fly. But I do get it wrong and when I do, it's a big mistake.

On top of this, I tend to move heaven and earth to adapt for great people and find ways to meet their needs to work part-time or in different places or different roles. Again, this is the secret of much of our success, but occasionally we over-adapt and should just let people move on. Every time I get it wrong, I get desperately upset and disappointed and have to force myself to keep on taking the risks because on the whole it works.

There are many more mistakes. Don't believe any leader, especially a pioneer, who says they don't. Or even one who claims to make mistakes only once, learns from them and never makes them again. Because neither is true.

Sure you get better and wiser (though I suspect this is an over-rated concept, really just a word to make you feel better about getting old!), but you continue to struggle and need to keep checking the scorecard to make sure you get more right than wrong. I do.

About Julia Middleton
Julia is passionate about helping people to develop as leaders, and campaigns to encourage leaders from all backgrounds to make an active and tangible contribution to their communities and to wider society.

In 1989, Julia launched Common Purpose, which has grown to be one of the biggest leadership development organisations in the world. Julia helped found Demos and Impetus Trust and sits on the boards of the Media Standards Trust, Alfanar and the International Advisory Council for Fundação Dom Cabral.

Julia is the author of Beyond Authority: Leadership in a Changing World and Cultural Intelligence - CQ: the Competitive Edge for Leaders Crossing Borders.