When Detroit native Tyree Guyton returned to his hometown after serving in the army, he was shocked by what he saw. It was as if "a bomb went off," he later stated. The scenes that welcomed Guyton home were images of a city that had rapidly declined after the 1967 riots; the once-flourishing metropolis was literally falling into ruins. The changes were most evident in the McDougall-Hunt neighborhood, where Guyton had grown up.

You could almost say a bomb went off inside Guyton, but one of a different sort: an explosion of creativity as opposed to destruction. The artist wanted to demolish the decay that had overtaken the city, and literally transform the lives of the people around him. With the help of his grandfather Sam Mackey, Guyton began using paint and found-objects to decorate abandoned houses and set up outdoor art installations in the surrounding neighborhood. From the mind of one man hoping to inspire change, The Heidelberg Project was born. Clearly, Guyton's motto, "Stick and stay, and it will pay," has certainly paid off: what began on Heidelberg Street turned into a full-blown art rejuvenation project, and has since captured the interest (and hearts) of people the world over.

[Scroll down for gallery, video]

Recently, MutualArt.com chatted with two 'die-hard' Heidelberg devotees: Young Associates of Heidelberg (YAH) Program Coordinator Jessica Brooke Williams, and Amanda Sansoterra, Emerging Artist Program Director. These two Heidelberg staff members detailed some of the HP's upcoming projects, highlighting how this innovative initiative "has grown into a community all its own."

Since it was conceived 25 years ago, Detroit's Heidelberg Project ("HP") has brought art and culture to an impoverished city. It has given hope to area residents, and become a forum for discussion, emphasizing the importance of art as a tool to improve social and economic conditions in the community. Guyton became the head artist of the program, tirelessly painting, polka-dotting, and affixing art installations throughout the streets of his neighborhood. The project has inspired several books, and in 1999 Guyton was the subject of the Emmy-award winning documentary entitled Come Unto Me: The Faces of Tyree Guyton. The HP was also one of 15 institutions from the United states included in the 2008 Venice Architecture Bienniale, and has been visited by celebrities, art-world officials, dignitaries and community planners, all of whom are helping to support the cause.

The Project receives over 275,000 visitors annually and has developed art education programs that work within the Michigan school system. "The Heidelberg Project and its founding artist, Tyree Guyton, have gained quite a following over the years, both nationally and internationally. With this recognition has come many opportunities to partner with many different people and organizations, developing fascinating events that have attracted thousands of people," Williams affirms.

And a very 'Happy Birthday' it is. This year, as the Heidelberg Projects celebrates its 25th Anniversary, there is much cause for celebration: Tyree Guyton is in Basel, Switzerland, as part of a year-long residency program at the Laurenz House, where he will be creating a series of works reflecting on the 25 years of the HP. This work is a featured aspect of his 2009 honorary PhD from the College of Creative Studies. In addition, Guyton will have the chance to be a part of Art Basel's 2012 edition. As for the HP itself, there have been a variety of events commemorating The Project's establishment in 1986. Now open (through November 27) at the Charles H. Wright Museum of African American History is Heidelberg 25, an exhibit which charts the course of the HP over the past 25 years - from the project's humble beginnings to its future plans for expansion in the upcoming year.

Earlier last month, the organization celebrated Guyton's departure for his art residency in Switzerland with a farewell concert in his honor. "[The show] featured legendary Jazz artists Marcus Belgrave and Anthony Wilson who performed with the All Star Jazz Orchestra. Together they composed new music including one very special piece, the 'Heidelberg Suite'. This was all made possible by a generous grant from the Fred A. and Barbara M. Erb Family Foundation." Also of note is the 2011 publishing of the Heidelberg Project's children's book, Magic Trash: A Story of Tyree Guyton and his Art. "We've had such a wonderful response to its release, selling hundreds of copies in the few short months it has been out," Sansoterra says.

There have been a variety of other events throughout the year highlighting the anniversary, including open house exhibits, shows featuring Guyton's work, lectures, performances, and street art exhibits. A much beloved HP staple is the street art festival. Starting in 1994, the project has hosted this biannual festival on Heidelberg Street, with each yearly event designated a particular theme. In 2010, "Dancing on the Streets" was the name of the show, "or D.O.T.S as the Project's Executive Director, Jenenne Whitfield, cleverly coined it," says Williams with a laugh. (Clever indeed, as the name also references Guytron's signature polka-dots, found on many of the HP works - like the 'Dotty Wotty House' which has since been renamed 'The New White House;' Above. Photo: Michelle Figurski.)

The 2010 festival was comprised of an eclectic mix of musical styles, from hip hop to jazz to classical tunes. Performances from renown artists like the DSO (Detroit Symphony Orchestra) and the German-born artist Invincible rocked the "house" on a stage set right on the street that is The Project's namesake. Williams enumerates a few other Heidelberg highlights: "In addition to the many galleries and museums that house works by Tyree Guyton and photojournalism of the Heidelberg Project, in 2003 The Project was featured in a New York exhibition developed by Trevor Schoomaker called DTroit, [which emphasized] the creative culture in Detroit."The program coordinator also pointed out the great influence the HP has had on the younger generation. "Many young adults from Detroit and local colleges have and continue to install their very own found-object pieces on the project site, and perform musical, theatrical and dance pieces right on the street!"

An Evolution Of Sorts

Part political protest, part art promotion campaign, part catalyst for social transformation, the Heidelberg Project has seen a lot of change since it began in the 1980s. "The Heidelberg Project has evolved both physically and figuratively over the last 25 years," Williams says, elaborating, "from its inception, the Heidelberg Project was largely misunderstood and deemed an eyesore. Those who supported were limited in number and assistance to help it grow." And Williams details how the project has grown from such humble beginnings, as a seed of discontent that has since blossomed into an ongoing example of how art can benefit the masses. "It began, simply, as a "project" representing one man's restlessness and frustration of the crumbling community around him. Now it stands as a historical and highly respected visual representation of Detroit's own evolution - challenging local residents and people around the world to think about how a collection of found objects, with applied meanings of how they represent a culture that has fought against poverty, crime and industrialization, can help renew people's lives and the environment around them," she explains.

WATCH: What The HP Is All About (Story continues below)

A Device For Social Change

The HP believes that implementing creativity as a device for social change should start with a young demographic, who are eager to continue and expand upon Guyton's vision. "The Heidelberg Project is an operating, nonprofit organization with a growing staff of young adults who are helping to craft it as an engine that will motivate people to understand how to use art as a catalyst for change. The HP provides in-depth lectures on this very topic at local colleges and human services organizations, institutes a comprehensive art program called ACE2 (Art, Community and Environmental Education) in local elementary schools and has an outstanding Emerging Artist program that provides professional development and gallery exhibitions to emerging artists in the Metro-Detroit area."

The Heidelberg Project staff hopes to continue developing their many programs. "We are focusing on developing ACE2 - which is a comprehensive program that supplements the lack of art education in metro-Detroit public schools and at the same time, teaches children the value of the environment and the community - as well as YAH and our Emerging Artist programs," Sansoterra says. "We continue to grow and expand, especially this past year. We are also currently in the process of developing our community art center, The House That Makes Sense (HTMS), which is a headquarters and multi-purpose space, made from found and recycled materials. The HTMS will include an exhibition space, artist-in-residence space, children's workshop, a library and more."

With these goals in mind, the HP is working toward a larger purpose - to heal the community and enrich the lives of its members - through the world of art. "The ultimate goal of the Heidelberg Project is to encourage people to use art as a catalyst for positive change," Williams says. "Our mission focuses on bringing all people together to embrace and respect their diversity through the common language of art." A quarter of a century since its establishment, the Heidelberg Project is growing strong, and with Guyton's dream still in tact. "Moving into the next 25 years we are focused on continuing the conversation on how art acts as a therapy to support positive growth in young people and communities." And with continued community support, it looks like the Heidelberg Project will continue to inspire, expand, and influence for years to come. 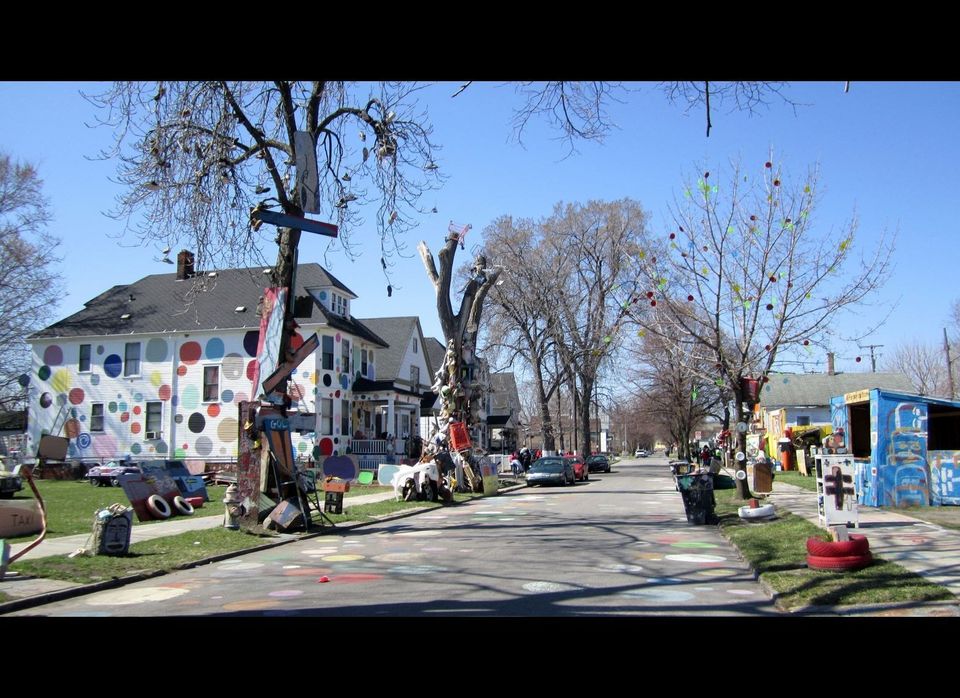