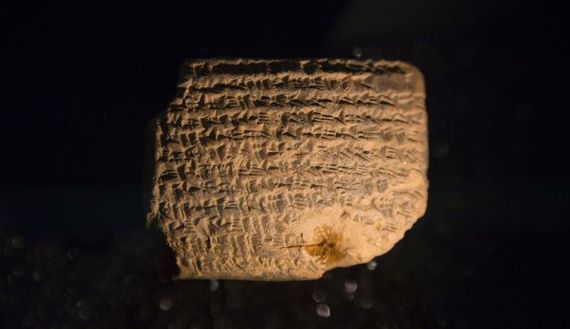 As we watch horrific images of beheadings from the country formerly called Iraq - a country that is disintegrating into various tribal fiefdoms before our eyes - it is easy to forget that it was once the cradle of civilization. In point of fact, Arabs are latecomers to the area. They are first mentioned in the mid 9th century BCE as a tribal people subjugated by the Assyrians. Way before that, the area was home to the Babylonians. First records indicate that Babylon was established as a city around the 23rd century BCE. It stood about 50 miles south of modern Baghdad. The city is mentioned in the Biblical Book of Genesis (11:9) as the home of the infamous Tower of Babel.

In 587 BC, it was the Babylonians, under King Nebuchadnezzar II, who destroyed Jerusalem, the capital of the Kingdom of Judah. They also destroyed the Temple of Jerusalem - the "House of God" - built by King Solomon, as the centrepiece of Jewish faith. It stood on Jerusalem's Mount Zion for almost 400 years. After the destruction, the legendary Ark of the Covenant, that had once housed the Ten Commandments, disappeared. According to Jewish tradition, it was hidden by the prophet Jeremiah. It has never been discovered. The Biblical books of 2 Chronicles and 2 Kings describes how the Babylonians took the elite of the Jewish people into captivity. Psalm 137:1 records the anguish of the captives: "By the rivers of Babylon we sat and wept, when we remembered Zion". After the Babylonian empire was defeated by the Persians from modern Iran, the prophets Ezra and Nehemiah led a minority of Jewish exiles back to Jerusalem, motivated by an ancient version of Zionism.

Now for the first time, one hundred and ten, 2,500 year old Babylonian tablets have been discovered in Iraq which provide a glimpse of Jewish life in Babylonian exile. Put simply, the tablets corroborate the Biblical tale. They describe a town called Al-Yahudu i.e., "the village of the Jews", by the river Chebar, mentioned in Ezekiel 1:1. They also attest to Judaic names such as "Gedalyahu", "Hanan", "Dana", "Shaltiel" and a man with the same name as Israel's current Prime Minister, "Netanyahu". The "yahu" ending to these names is called "theophoric", meaning, they attest to a belief in the God of the Torah, by including part of God's name in people's personal names. The tablets also record everyday business transactions and witness to the Jewish return to Jerusalem (Nehemiah 6:15-16), as commemorated in personal names such as "Yashuv Zadik", meaning, "the righteous shall return [to Zion]".

This discovery is a remarkable confirmation of the historical reliability of the Biblical text. It is also a reminder that many people once lived in Iraq. Today, there are still remnants of some of these people: Jews, Christians, Mandeans (the last remaining followers of John the Baptist) and Yazidis, an ancient people whose beliefs combine elements of Zoroastrianism, the pre-Islamic religion of Persia, early Christianity and Judaism. All these ethnic survivors are now facing massacres, crucifixions, rape and decapitation.

Do we dare let them disappear?