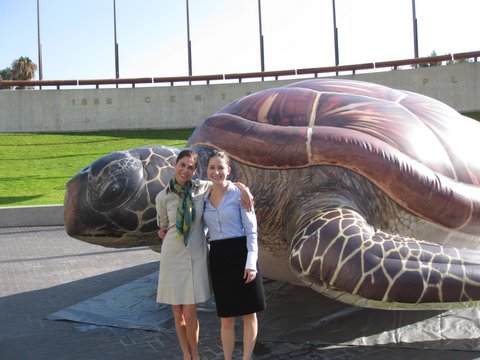 While the California Senate prepares to vote on The Single-Use Bag Reduction Act (AB 1998), the most far-reaching legislation ever considered in America to curb the environmental plague of single-use plastics, a 25-foot inflatable turtle is making the rounds at press conferences around the State to call attention to the devastating impacts of single-use plastic bags on marine animals.

The Senate is expected to vote on AB 1998 by August 31, 2010. If passed, California would be the first state in America to prohibit single-use plastic bags in grocery stores, convenience stores and pharmacies. The Governor has already pledged to sign the bill if it reaches his desk.

Although California would be the first American state to adopt a plastic-bag ban, similar legislation is already enforced in smaller jurisdictions throughout California and America, and in many jurisdictions around the globe. In fact, 25% of the world's population currently lives in a region where single-use plastic bags are restricted.

The reduction of plastic bag pollution in California would be welcome news to the Pacific Leatherback Turtle. These endangered turtles consume hundreds of jellyfish each day, and commonly mistake the floating plastic bags that litter the ocean as their favorite food. The Pacific Leatherback Turtle population has declined 95% in the past two decades as plastic pollution has increased at alarming rates.

"Plastics have been entering the marine environment in quantities paralleling their level of production over the last half century. However, in the last two decades of the 20th Century, the deposition rate accelerated past the rate of production, and plastics are now one of the most common and persistent pollutants in ocean waters and beaches worldwide . . . Between 1970 and 2003, plastics became the fastest growing segment of the US municipal waste stream, increasing nine-fold, and marine litter is now 60-80% plastic, reaching 90-95% in some areas . . . Albatross, fulmars, shearwaters and petrels mistake floating plastics for food, and many individuals of these species are affected; in fact, 44% of all seabird species are known to ingest plastic. Sea turtles ingest plastic bags, fishing line and other plastics, as do 26 species of cetaceans. In all, 267 species of marine organisms worldwide are known to have been affected by plastic debris, a number that will increase as smaller organisms are assessed."

"Every year in California, we use 19 billion plastic bags-enough to reach the moon 15 times," says Gina Goodhill of Environment California. "Nothing that we use for 5 minutes should pollute the ocean for 500 years."

"Last year, over 70,000 single-use plastic bags were found on California beaches by volunteers in ONE DAY," says Angela Howe, Surfrider Foundation's managing attorney. This amount of plastic pollution is overwhelming to taxpayer funded clean-up crews, even with the assistance of the largest volunteer clean-up efforts on the globe. Single-use plastic bags have been documented by deep sea submersibles floating like ghosts under the ocean and are a staple source of pollution in the Great Pacific Garbage Patch 1,000 miles off the coast of California.

"California can't pass up an opportunity to pass landmark legislation and lead the way for the rest of the country with respect to reducing the trash that pollutes our environment, says Steve Aceti, Executive Director of Calcoast. "Previous attempts to solve the problem, such a through recycling, have proven to be unsuccessful, so a statewide ban is the only solution and is preferable to the hundreds of local bans." Many jurisdictions have indicated plans to enact local bans should state legislation fail. Please find out more information and send a letter to your Senator.