This article originally published in the inaugural edition of Workplaces Magazine on February 1, 2016 and can be found at this link.

While coworking is becoming a new norm in cities and urban areas, most still say that suburban coworking can't be done... but Mara Hauser, CEO and founder at 25N Coworking is doing it. 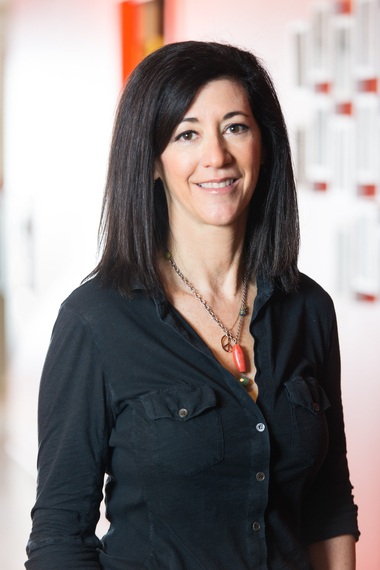 Unlike most - who have stumbled into the coworking movement from unrelated fields - Hauser's background is corporate interior design. She saw the challenges of an increasingly mobile workforce and wanted to build on her knowledge of what was changing in the workplace to create something new. She decided to bring this concept home to Geneva, IL, a Chicago suburb. Hauser says, "I am an early adopter of a new movement for sure. I had a need. I am a mom, and I work. I have kids in school and I chose to live out here. I would love to work out here, and believed there were more people like me." 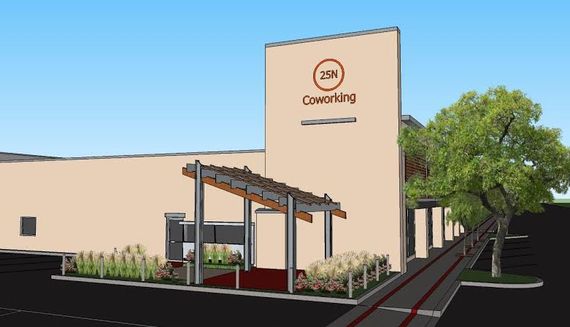 Hauser spent two years researching the concept, recruiting early members, and seeking the right space. Location selection was a critical element. The reason most people say suburban coworking won't work is simply due to volume. Selecting the right suburb was key. It had to be in an area where there are professionals, on a train line, and with significant time savings if a commute could be avoided. She says, "It has taken longer for us to build volume because of awareness. The coworking movement is still emerging everywhere, but there is even less awareness in the suburbs. We first have to create demand by teaching people that there is an alternative."

Suburban coworking spaces operate differently than "traditional" coworking spaces because the suburban audience has different needs. People move to the suburbs so they can raise families, find larger and more affordable homes, and to find space away from the urban density and challenges of city life. Homes are more spread out and in neighborhoods. Hauser explains, "In urban locations they have smaller homes and then need to get out to find space for business. However, in suburbs there has to be some sort of incentive to leave that large, cozy, renovated basement. We have to provide something with better design, better technology, and better ways of working than they have in-home." Cost can also be a big factor. Many people have been working from home and have not had to spend money on office space, so it can be a tough concept to consider at first. At 25N, a flexible menu of options starts at $250 per month, which is on par with individual area office rentals. Plus, this includes printing capabilities, the fastest Wi-Fi, cleaning service, coffee, concierge services, and a social community. The goal is to take away all of the distractions so that workers can... well, just do their work. 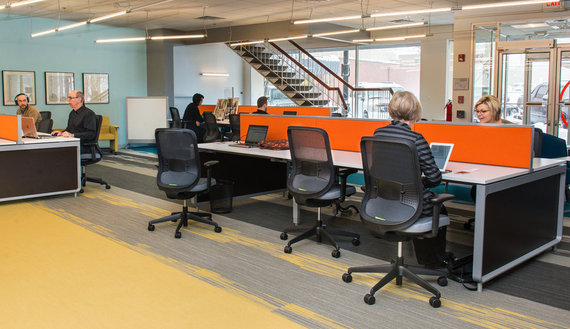 Hauser leveraged her workplace design and business background to bring meaningful design to the suburbs. The design team at Workplace Studio, Hauser's interior design firm, set out to transform the 12,000 square foot space into a fresh, happy place with lots of natural daylight. Consistent with current workplace trends, they created work zones ranging from open to semi-private and private, with informal collaborative spaces interwoven, giving workers a variety of spaces to meet the task at hand. This includes traditional desks, impromptu settings for casual meetings, places to kick your feet up and take a conference call, private phone booths, and even outdoor workspace. Hauser says, "Research tells us that kids have a 20 minute attention span. Adults have only about a 40 minute attention span. We give them space to move around yet still be productive." For more images of the space, visit their website here. 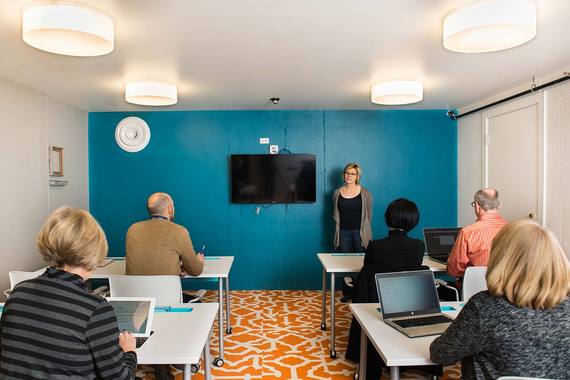 Many coworking operators have found that people typically first come for the space, but stay for the community. Meaning: while people originally come thinking they need a space outside of their office or home to work, they typically find incredible inspiration from the social connections they make. How can they get different people with different types of backgrounds, businesses, and expectations to interact? Hauser says, "Events are a big part of developing community at 25N. Everyone is independent, but they don't have to be alone." What coworking does is provide serendipitous connections. We are not allowed to solicit one another, but like traditional workmates, when they see one another day in and day out, people get to know each other at a different level. Meagan Schoenrock, the on-site office manager, knows everyone, their families, and what their needs are for their business. It is her job to make connections.

Unlike their original assumptions about who would come, 25N clearly has all five generations working within their walls. The over 65+ crowd is a smaller percentage, but most users are distributed evenly between thirty-somethings, forty-somethings and fifty-somethings. Half of their members are female.
The community is evenly distributed with about one-third virtual corporate employees, one-third freelance, and one-third small businesses. These ratios are actually quite different than most urban coworking spaces, who tend to have a larger percentage of freelancers and much smaller percentage of corporate virtual employees. Hauser believes that this is just one of many indicators of the future success of the suburban coworking model. She questions what will happen when millennials, who tend to seek time over money, begin to have families and migrate to the suburbs. She notes, "A lot of startups think they have to be in the city, but do they have to if they are in places like this? Many business in cities are shrinking their real estate portfolios. They want to have hubs near their customers, but where are customers? Many of them may be in the suburbs. Suburban locations might not be the headquarters, but it can be a great strategy to leverage hubs as an additional employee benefit." 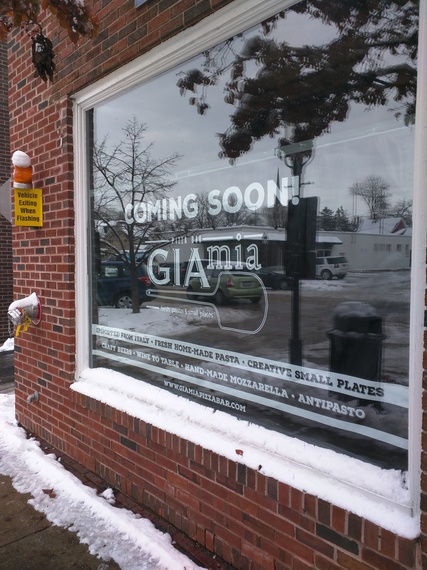 The benefits of suburban coworking are not limited to members of the space. 25N has been so welcomed by local businesses that they recently won the Mayor's Choice Award. The city of Geneva gives an award each year for real estate and development. 25N was selected because of the foot traffic put on the street. It is a challenge for suburban neighborhoods bring people into the central business district. 25N workers and their clients put money back into the town by shopping over lunch, frequenting local restaurants, and leveraging local services. Since 25N opened its doors, six new businesses have emerged along their street. Hauser says, "We don't add tax dollars or revenues [to the city], but we are bringing people here who do. Our 135 - and growing - members come here from Geneva and 26 other nearby towns. It is local, but not just local. We even have an Italian company opening their first US-based location here."

Hauser recognizes that she is very much on the forefront of the suburban coworking movement, to the extent that she says, "We designed this location as a prototype." As word of their success in Geneva spreads, economic development and community teams are now coming to Hauser and her team. They are reviewing which communities are the best locations for expansion. Awareness is expanding. Workers are realizing what suburban coworking can do for their productivity. Cities are realizing what coworking can bring to them in terms of economic development. As coworking becomes an integrated part of work culture everywhere, suburban coworking will become part of the new normal.