Alderman Danny Solis was less than 100 votes away from sitting pretty.

In 2007, he was able to win re-election to his 25th Ward seat without a runoff, although just barely: he was 95 votes over the 50 percent mark required for an outright victory, and only after votes for Ambrosio Medrano were thrown out because Medrano was ruled ineligible to run. Community activist Cuahutémoc Morfin won second place with 22 percent.

This year, Solis was just on the other side of the halfway mark, coming up 96 votes shy of an out-and-out majority. It was again Morfin in second place, with Medrano’s son Ambi in third place.

Now, Morfin and Solis are headed to a runoff election on April 5. And despite winning 49 percent of the vote in the first round, Solis is showing no signs of taking this one for granted.

First, he tried to take the wind from Morfin’s sails by undercutting his signature issue: demands for regulating the coal-fired Fisk power plant in the ward. Solis had opposed an ordinance to keep that plant in check; shortly after the February 22 election, he reversed course, choosing to back the Clean Power Ordinance, as Huffington Post Chicago reported.

And in recent weeks, the 25th Ward Democratic Organization, controlled by Solis, has sent around a barrage of negative mailers with some misleading claims about his opponent.

Featured prominently in both mailers is a claim that Morfin is a tax cheat. For instance, here’s the front of one: 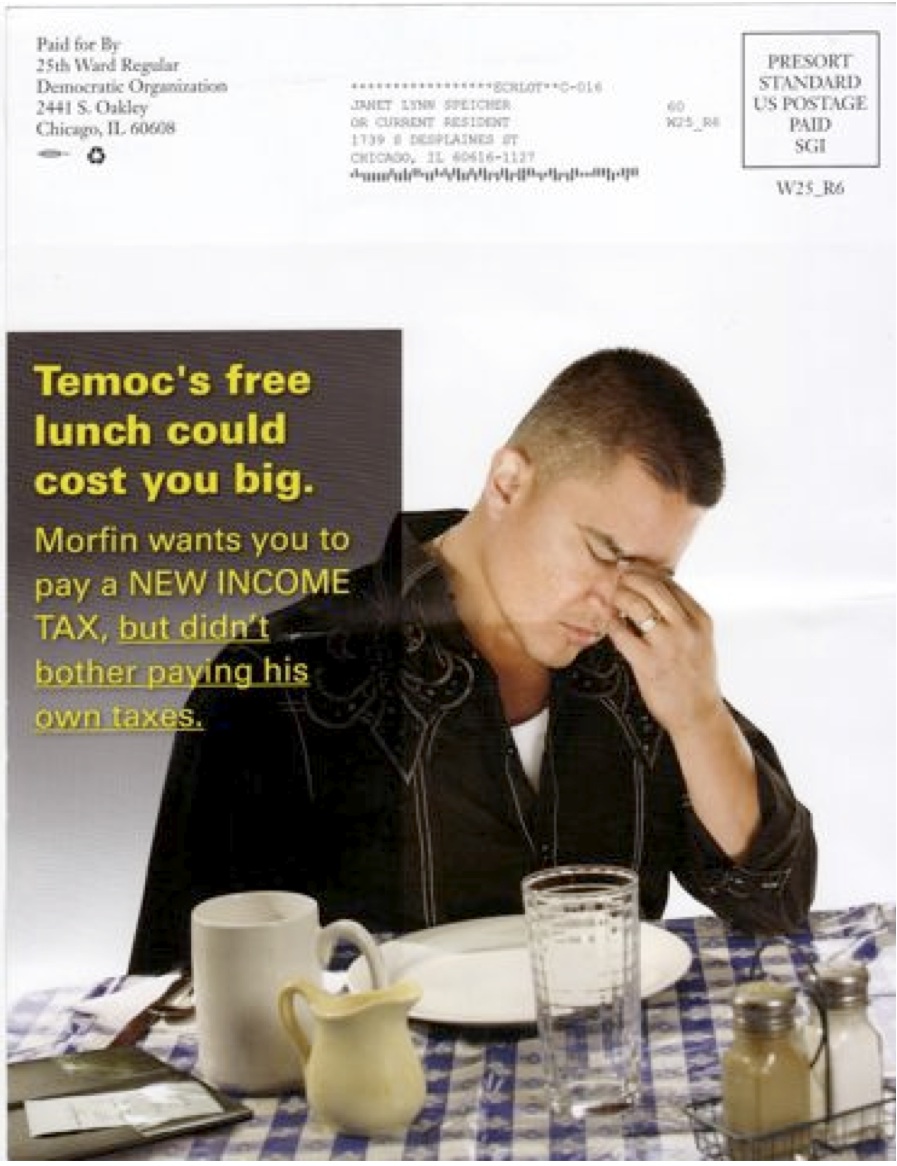 The document explains that Morfin’s “business was shut down for failure to pay taxes.” It cites a file with the Secretary of State’s Business Services department as evidence for the claim.

A call to that office, however, revealed that this wasn’t the case. Instead, the business was shut down because it failed to file a year-end report.

And the Morfin campaign has a simple explanation for that: the restaurant in question was incorporated on paper, but never opened. When he abandoned the idea, he let the company dissolve.

In another underhanded move, a separate mailer derides Morfin for supporting a video gambling expansion:

“Morfin’s policy ideas include… expanding video gambling, called the ‘crack cocaine’ of gambling because it is so addictive…”

Morfin does indeed support such an expansion, with limits — but so does Alderman Solis. From Solis’s Chicago Tribune questionnaire:

I think Chicago should repeal its ban on video gambling. I would support casinos in the city, especially if they were located in adaptively re-used buildings, providing more jobs for the residents of Chicago. We would have to be careful not to overload regulators, to ensure that gambling activity would be monitored properly.

That mailer also says that Morfin supports “forcing all Chicagoans to purchase and carry an Arizona-style ID card.”

Morfin, a longtime advocate for immigrant rights, was strident in his objection to that claim. “I’m disgusted and outraged by Ald. Solis’ attempt to tie me to the racist attacks on immigrants we’re seeing in Arizona, and to distort the intent of the municipal ID program,” he said in a statement. A municipal ID “would allow those in our community who are unable to obtain a state ID or drivers’ license to gain access to the critical public and private services they desperately need. To try to connect this initiative to the anti-immigrant campaign occurring in Arizona is shameful.”

In response to specific questions about the tax claims and about Alderman Solis’s stand on video gambling, a campaign spokesperson said only this: “Ald. Solis believes that each candidates should stand by their record. The campaign stands by the mailer and each item within it is documented.”

With less than a week before the elections, Solis is blanketing the ward with the mailers with the understanding that Morfin will have trouble responding, given the alderman’s massive fundraising edge. Indeed, a single donor to Danny Solis’s campaign — the New Chicago PAC — Rahm Emanuel’s funding wing — has given more than all of Morfin’s donors combined, dropping a total of nearly $38,000 on the Emanuel-backed incumbent.

"He's hoping all this negative stuff will disillusion voters,” said a source within the Morfin campaign. “He knows he benefits from low turnout. He wants to make people in the ward feel like there's no candidate worthy of their time, that there's no point in turning out to vote, and they should just stay home.”

Come next Tuesday, the effectiveness of that strategy will be put to the test.