For four years, Global Communities was busy assisting communities in Liberia to become open defecation free. Public defecation is a serious problem in much of the world - the waste leaks into food and water and causes sickness and disease. The program was quietly successful, but if not for the recent Ebola outbreak, almost no one, at least outside Liberia, would have taken notice. 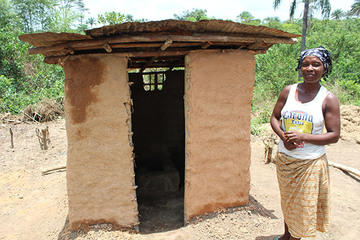 That USAID-funded Improved Water, Sanitation and Hygiene program, centered on our locally-adapted version of Community-Led Total Sanitation, began in 2010 in Nimba, Lofa and Bong counties. Community Led Total Sanitation reduces diseases spread by human waste and seeks to bring communities to open defecation free status. What separates it from other methods is that is evokes powerful human reactions like disgust and pride, and social pressure to create behavior changes that help improve overall health. The community is not told to change its behavior; the process creates the conditions where they want to change their behavior. The program gained the support of the Government of Liberia and Global Communities worked with them to develop their national sanitation strategy. By 2014, 284 communities had reached open defecation free status. 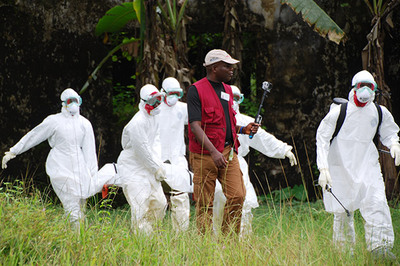 But when Ebola started to ravage West Africa last year, Global Communities and our partners in the Liberian County Health Teams and Ministry of Health found ourselves at the center of prevention and protection outreach. We scaled up our community engagement work and then, at the request of the Ministry of Health, began supporting burial teams, which was crucial since unsafe burial practices were widely identified as the source of 50-70 percent of infections. By October we were training, equipping and paying more than 500 incentivized volunteers across all 15 counties of Liberia, employed in the emotionally and physically demanding job of ensuring safe and dignified burials. The teams were able to bury 98 percent of bodies within one day of death, and not one of our burial team members was infected with Ebola.

It was at that same time that we received reports of an astonishing statistic. All 284 open defecation- free communities were reporting that they were also Ebola-free, despite being surrounded by Ebola hotspots. Was there a link between being open defecation free and Ebola-free? Or between the Community-Led Total Sanitation process and Ebola resistance? 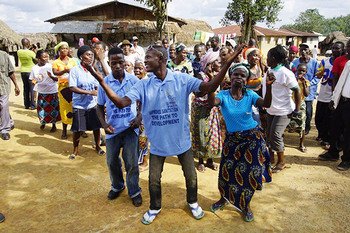 A community celebrates its verification as open defecation free

Earlier this year, Global Communities asked two independent public health consultants to research the informal reports we had received, and they came back with extraordinary findings. Focusing their research on 551 households in Lofa County, they established with a representative sample that the communities that had reached open defecation-free status were indeed Ebola-free. But they also found that communities that had even begun the Community-Led Total Sanitation process - but not reached full open defecation-free status - were 17 times less likely to experience a single case of Ebola. This suggests a statistically significant correlation between the Community-Led Total Sanitation work to become open defecation-free and in remaining Ebola-free. 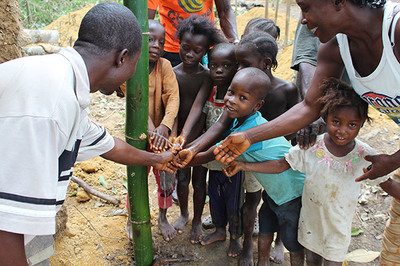 Still, we would be remiss in assuming that these findings mean that simply becoming open defecation free prevents Ebola. Rather, the findings suggest that those who had been exposed to Community-Led Total Sanitation education- especially education led by a member of their own community - were far more likely to adhere to healthier behaviors and practices. Now our charge is to conduct more research into the exact causal relationship of these findings, and we are seeking medical research partners with whom we can work to understand the full implications of these findings.

There have recently been encouraging advances on the development of effective vaccines and there is increasing agreement on the need to strengthen health systems across Africa and in other vulnerable countries. Community-Led Total Sanitation should be a central component of this initiative, adapted to the local environment and culture in each case. It is inexpensive - if a community is equipped with latrines, hand-washing facilities and other basics of sanitation, it can cost as little as $130 in incentives to bring a community to open-defecation free status. And this defends not only against Ebola, but against many water, insect-borne and diarrheal diseases, many of the biggest killers across the developing world today.

In the aftermath of the Ebola crisis, it is essential to improve hospital access and clinical infrastructure. But it is critical to remember that Ebola and other infectious diseases spread at the community level, and that we therefore must focus our efforts on curbing infections at the same level by empowering those at risk to make wise decisions that prevent infections in the first place. A small investment in prevention, as we saw in Liberia, was able to save thousands of lives and millions of dollars in curative and humanitarian interventions.