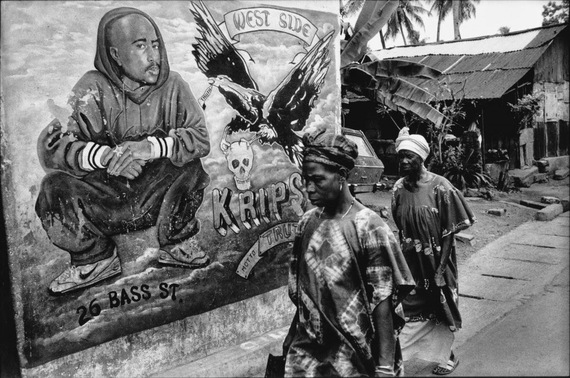 It is not uncommon for African Diaspora born artists to become popular in Africa. Bob Marley, Peter Tosh, Louis Armstrong, and Lord Kitchener are all examples of this. Tupac was yet another example of this. In a report on urbanization and war in Africa, Marc Sommers wrote:

Tupac Shakur is famous across Africa, most particularly among urban youth. His music is as common in many urban neighborhoods as Bob Marley's once was. His face and poses, pictured on clothing and in murals, are now widely familiar. A popular T-shirt has a black background, showing Tupac (spelled "2Pac") looking alert, with U.S. dollar signs ringing the collar and his most popular slogan, "All Eyez on Me," across the bottom. "All Eyez on Me," indeed--Tupac's lyrics expressing his alienation, fury, and his conviction that his quest for revenge is thoroughly justified, the police sirens in the background of many of his songs, the belief that he was not really murdered but is still alive (often proclaimed in "Tupac Lives" graffiti), all conjure an image of a defiant, proud antihero, and an inspiration for many of Africa's young and alienated urbanites.

Unlike some of the other artists that were mentioned, Tupac expressed a rather limited interest in Africa. He occasionally mentioned South Africa and dedicated a poem titled "Just a Breath of Freedom" to Nelson Mandela. Beyond that, Tupac was not as interested in African affairs in the way other Diaspora artists such as Bob Marley and Peter Tosh were. More so than any other American rapper, however, Tupac was able to connect to Africa.

This connection is understandable given not only Tupac's status as a global icon in music, but also because, more so than most rappers, Tupac's lyrics accurately described, in gritty details, the life of impoverished African people. Tupac spoke about growing up in poverty, having a drug addicted mother, struggling against oppression, and other issues that impact Africans in the United States, but these themes can also be applicable to Africans throughout the world. The issues that Tupac sang about in America are issues that plague black people in Africa.

Tupac himself probably never considered the impact that his music would have on African people outside of the United States, which makes it interesting that although Tupac never addressed himself specifically to an international African audience in the manner that Bob Marley did, Tupac's popularity in Africa rivals that of Marley's. Marley connected to African audiences because he sang about African unity and the struggles of African people against colonialism. Tupac's appeal to Africans was that Africans in the continent were able to relate to the struggles of Africans in the United States, which Tupac articulated in his music.

One of the troubling aspects of Tupac's popularity in Africa is his popularity among African rebel groups. In Sierra Leone, some of the Revolutionary United Front (RUF) rebels referred to themselves as the Tupac Army. The RUF rebels, who were fighting to overthrow the government, committed a number of atrocities. They slaughtered civilians, burned people alive, raped women, chopped off people's arms, and forced children to fight as soldiers.

Just as Tupac can be a positively inspiring influence for frustrated and impoverished youth looking to create social change, his music can just as easily be used as a symbol for violence and vengeance. In songs such as "Hit 'Em Up," "When We Ride on Our Enemies," "Breathin,'" and "Against All Odds," Tupac spoke about getting revenge by viciously killing his enemies. In "Hit 'Em Up," rapped about killing rival East Coast rappers. Hit 'Em Up was one of the phrases that the rebels would write on their vehicles.

The rebels saw Tupac as a rebellious figure who engaged in a violent struggle for what he believed in. This appealed to them in their fight against the government and served as one of the inspirations for their violence. The Sierra Leonean government, however, had a different view on Tupac. They blamed his music for inspiring the RUF rebels to act violently. It is difficult to completely blame Tupac here because he would not have agreed with having his image being used to justify such acts of violence, yet at the same time he is not completely innocent because there was an element of his lyrics that promoted violence. Rebels listening to Tupac's music would have come across lyrics such as "automatic gunfire making all my enemies run," "cut your young ass up, leave you in pieces, now be deceased,"and "my automatic rounds catch 'em while they sleeping." Tupac was rapping about getting revenge against his enemies, not killing innocent civilians, but for the RUF rebels the civilians were viewed as enemies in their war against the government, especially the ones that supported the government. For this reason the rebels cut off the hands of civilians to punish them for voting.

Here is also where we see some similarities between black-on-black violence in the United States and civil warfare in Africa. In both cases we are dealing with an impoverished and dispossessed population of people that have endured centuries of hardships. In the United States one can easily point to slavery and Jim Crow as events that psychologically traumatized African people. Although colonialism in Africa lasted for a relatively shorter time period when compared to the centuries of slavery in the Americas, the colonial period was just as traumatizing. Aside from colonialism, the slave trade itself caused much chaos and upheaval in West and Central Africa. Sierra Leone, Liberia, Cote d'Ivoire, Nigeria, and other African nations that have suffered civil wars were psychologically impacted by the slave trade and colonization.

Although Tupac's music did not have the Pan-African message that Bob Marley's music had, his music played a significant role in bridging the divide between African people living in the United States and those living in Africa. The popularity of Tupac's music in Africa demonstrated the similarities between the struggles of African people on both sides of the Atlantic.