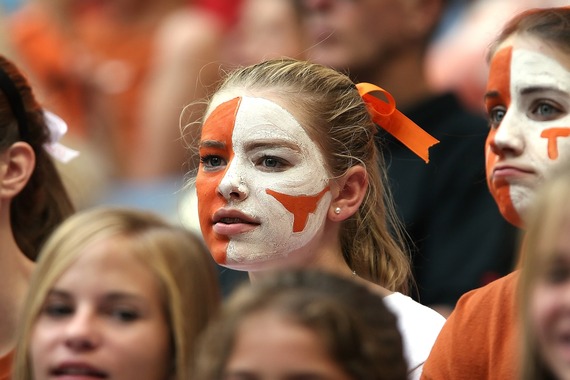 In high school, I grew up with a group of guy best friends. I quickly learned that if I ever wanted to have anything to contribute to their conversations, I needed to understand sports. I'd join in each Sunday to watch football with them on what can only be compared to what I imagine the New York Stock Exchange to look like - total chaos. They were all in different rooms, watching different games and screaming different obscenities. It was fast paced, it was competitive and it was exciting.

Now, over 10 years later, I proudly know more football stats than most guys I meet. I spend every Sunday in the fall watching NFL games and I scream at the television to the point where I embarrass my friends and sometimes myself.

On these Sundays, I'm constantly asked by my girl friends how I could possibly be this into a sport. My question to them is, how can you not? We've all seen Mean Girls; women have an innate competitive nature that burns inside of them. Who likes to lose? The competitive nature of sports is what drives my interest and it should drive yours too. The desire to make a team your own, win or lose.

Throughout these 10+ years of being a "sports fan," I have realized that my love for sports puts me at a huge advantage in business, relationships and life.

1. It's a great conversation starter

I once had a meeting with a guy to find out more about his company and hopefully land a job. As I waited for him at the bar, I became anxious thinking about what we would have to talk about. Then, as I nervously tapped my foot in anticipation, the sports gods sang and the Monday Night Football game came on the TVs. When he arrived, I immediately broke into conversation about the game. Two hours later, we had yet to talk about his company but I had easily landed a new best friend.

Sports lovers will have teams they love and teams they despise. Regardless of which team they are, they want to talk about them. This shared interest is a remarkable tool for making an immediate, easy connection with someone.

2. It's a useful business tactic

There are few business development activities that are geared towards women. I'm not going to spend a day on the golf course and I'm not going to sit at a cigar bar enjoying the musty ambiance. I can, however, attend a basketball game wholeheartedly and I can walk into the office on Monday with an overly emotional opinion on the past weekend's sporting events.

This allows me to build relationships with prospects and colleagues that I may have never been able to relate to otherwise. What's more, when said prospect or colleague sees your team doing well, you come to their mind. They may even be provoked to send a "Good game" text. In business, especially when trying to land a new client, there is nothing more effective than subconsciously placing yourself in their mind on a recurring basis.

3. It's a dating game changer

While this isn't why I got into sports, being a sports fan has made me realize that this is the secret to understanding men. It sounds pretty obvious but yet, why aren't there more girl sports fans? Even moreso, if you're speaking "guy", they never have to come up with awkward excuses to talk to you. They'll give you sports updates; they'll ask for sports advice and be not only interested, but intrigued, in what you have to say. Never again will you have to wonder if he'll text you the next day.

Realistically, wouldn't you rather spend a Sunday watching football with your boyfriend, and loving it, than finding something else to do and pissed that he would rather watch guys throw balls than spend time with you?
Spoiler alert: They will always choose to watch grown men jump on each other over you. They will.

There's a reason athletes make so much money. Millions of fans are loyal and dedicated to buying tickets to their games and wearing their memorabilia. It's time for girls to give in and join the party. Do it for the perks, but mostly do it for yourself.
Even if it's not your favorite activity, consider this, it's the most consistent drinking event you'll ever find - you drink when you're winning and you drink even more when you're losing.

Disclaimer: It is not cute to pick a team based on colors. If you don't have a preference, just pick your home team.

If you're not sure where to begin, I recommend joining a Fantasy team. Yes, do it. If no one will let you join because "you're a girl," join a free Yahoo league for practice and get catapulted into the addictive world of sports. It does take time and dedication, but I can assure you it really is all fun and games (except when you're crying on the floor over Tony Romo's 25th injury).

Give it a try and an open-mind and witness the doors that will open for you.