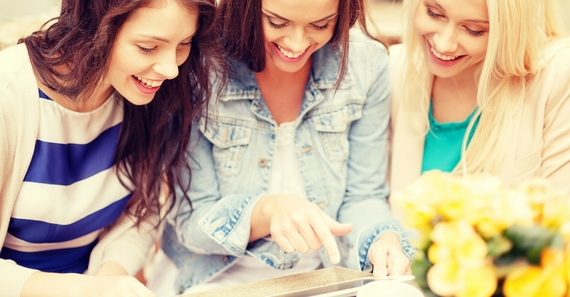 It seems the advent of female-driven content in Hollywood is here. Everywhere you turn, there's someone somewhere in LA talking about it.

But is it here to stay - finally?

That's an honest question considering how many false starts the rise of female-driven content in Hollywood has experienced in the past.

For instance, when Susan Sarandon and Geena Davis recently reunited at this year's Cannes Film Festival about 25 years after the groundbreaking success of Thelma and Louise, Sarandon mentioned that many people predicted more female driven content would finally make it to the big and small screen after their film's commercial success yet that never happened.

But things have changed considerably since 1991.

Big things that make a huge impact on the economic market like women are now acquiring college degrees in higher numbers than men for the first time in history.

Within the next decade, women in the U.S. will gain the largest transference of wealth ever experienced in history.

And, for the past six years, about 9 million more women go to the movies than men in the US and I'm going to go out on a limb here and even say it's the first time that's ever been experienced in the history of mankind. (If you haven't caught on by now, I'm trying to point out we're at a truly historical moment in time.)

[NOTE: For more facts about how the US and the world is now primed for the success of female driven content in Hollywood, check out this amazing resource offered at the Producers Guild of America. It's quite inspiring to say the least!]

So it seems that the time has finally come where investing in female-driven content is a very smart financial decision.

But that's not the only reason to do it. Hollywood should create more female-driven content because it's also the right thing to do too, which I believe should matter just as much. I know many will scoff with cynicism at such an idealistic notion.

But frankly, there are a million different ways you can make money in this business so why not focus on the ways that can make the world a better place - that's what I say. So the cynics can scoff all they want.

Here are my 3 big reasons why female-driven content matters so much.
Stories are powerful. Essentially, we are biologically wired to think in terms of stories. The type of stories that we tell ourselves literally shape the world we live in - making it the heaven or hell we choose to tell.

Female-driven content matters because women and girls need relatable characters with a positive narrative to inspire and guide them down their own hero's journey.

After all, it's a lot easier to imagine becoming an astronaut once you've watch the character Melissa Lewis (played by Jessica Chastain) helm the space voyage in the film, The Martian.

I know that family and friends can also fill in this narrative. Knowing a real life female astronaut is certainly the best inspiration and guidance but most of us can't rely on that.

We need stories to inspire and guide us because we are literally the first woman we know to go where no woman has ever gone before.
Essentially, the stories we tell ourselves about ourselves form our cultural identity. Our cultural identity is important because it's the lens you see yourself and the world around you through and impacts every decision you make in life.

There was a time in the US when people justified keeping girls uneducated because they believed in a story that said God had made woman from man's rib. This story shaped and supported the belief that women should be subservient to men. No need to get an education when your only purpose is to serve your husband, right?

This one story deeply impacted us, creating a lasting culture that treats factually equal human beings (i.e., men and women) as anything but equal.

Female-driven stories in Hollywood have started and can continue to help shape a new cultural identity for women - one that's not dependent on the sexist myths of the past. Everyone including men and boys need to see all the success and achievement women and girls are now experiencing in record numbers so together, we can create a new cultural identity based on mutual respect that will allow females in our society to thrive to their full potential.

The good news is that Hollywood will also be rewarded for doing the right thing when this thriving society come out in droves to see these female-driven films and TV shows.
This reason is so big I may go as far as saying it's a huge reason to invest in female-driven content.

Again, we are biologically wired to think in terms of stories. We know this because studies have shown we remember things better if facts are told in the form of a story. It's the reason most public speakers capture their audience with a story in the beginning of their talk.

But what's most important about this is the reason we are wired to remember information - for emotional connection and survival.

Basically, stories are our "how-to" for developing and having empathy for our fellow humans and also a guide of "what not to do" if we want to survive in this life for as long as possible. For example, in the past, a story may have taught us how to run if we saw a bear in the forest and how to mourn for the friend or family member that didn't.

A modern day example would be how I felt when I first started to watch Netflix's Grace and Frankie. This is a story about two older women (played by the extraordinary Jane Fonda and Lily Tomlin) in their late 60s having to deal with being single after their longtime husbands left them for each other.

As I watched this show, I noticed a strange feeling. I noticed that I had never experienced a story with this perspective. I really had no idea what life would really be like for me at that age because stories about women around that age barely exist. It was like glimpsing for the first time on unchartered territory - unfamiliar, yet intriguing.

I realized that up to this TV show, all I had to pull from about life during my upcoming elder years really is my Italian immigrant grandmother who barely speaks English. Although I love my grandmother dearly, with our experiences and viewpoints on life being so different, I actually felt more connected with Grace and Frankie's views and lifestyle.

I distinctly realized that I was gaining a new perspective on my golden years that could guide me. It made me realize that women and girls (and men and boys too) need to expand their perspectives through female driven content so they can learn how to connect to each other better (for example, I have some insight in what my grandmother may be dealing with in her life now) and for tips to prepare for parts of the journey we haven't yet arrived in.

Women and girls need female driven content to make it to the screen in larger (dare I say, equal) numbers because we need a different, more inspiring narrative about women for society, survival and emotional connection.

In the end, it's not only the smart thing to do. It's the right thing to do. And the best place to start is where story is king - ahem, I mean queen - and that's in Hollywood.