Companies are still reeling from the arrival of the first generation of truly social consumers into the market. But their arrival into the workforce might create more disruption than their new buying behaviors ever did. With over a third of the current workforce comprised of these social consumers -- a number that will rise to nearly fifty percent by 2020 -- companies would do well to factor the changing demands of this growing demographic into more than just their hiring strategy(1).

Social consumers, those consumers who integrate social media and mobile technology, and the increased information and leverage they bring seamlessly into their buying behavior, have used their collective buying power to become perhaps the first generation capable of forcing companies to rethink not only how they interact with consumers, but also their corporate policies (think of major corporations reacting to the Religious Freedom Act, Starbucks' new employee education policy or United Airlines recent stance against big game trophy hunting). And they are now using this same consumer power to change companies from the inside out.

"Companies that are grabbing top talent from today's best schools understand that they have to offer more than just a good salary and strong benefits to win over these students," says Taimour Zaman, Founder of One Million Acts of Education , a not-for-profit training organization that helps companies utilize the capabilities of younger generations to create innovative sales and marketing growth strategies. "They have to offer them a complete package that appeals to them on a deeper, more emotional level--they have to consider things that they've never seen as important before." 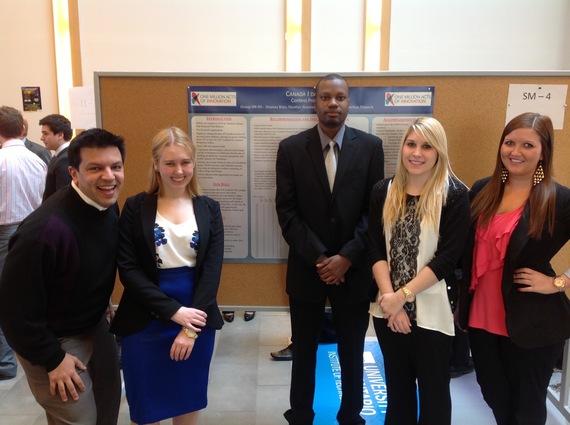 CEO Taimour Zaman (far left) and a group of millennial students that are part of his One Million Acts of Education program.

Here are three major areas that companies should consider if they want to attract the top talent from the growing pool of millennial candidates:

• Cultures of Relativism - Delta and American Airlines didn't unite with United Airlines' policy change to stop transporting game trophies due to a sudden change in ethics -- they did it as a response to social pressure. Social consumers would have damaged their brands on social sites if they didn't, and this would have been bad for business (something airlines have already learning). Unlike older generations, social consumers lead with their hearts and minds and let their wallets follow, refusing to align with brands that don't meet their social, ethical or moral ethos (Giannetto, David F. (2014), Big Social Mobile, New York, NY: Palgrave Macmillan. Page 72.). They bring this same attitude to the job interview, refusing to consider companies that aren't aligned with their beliefs--often doing research beforehand. While in older generations a male candidate might not be fundamentally opposed to sexual wage discrimination, younger generations of either sex are more likely to view this as a reason to disassociate themselves with that same company. Understand your brand's policies when you are talking with these candidates--and understand that they will ask you about them--and be prepare to explain the corporate logic behind them, especially any public blunders or statements the company has made.

• Social Responsibility - Big business often adopts a stance that their social responsibility ends with their shareholders. And while technically that might be accurate, social consumers entering the workforce don't see it that way. They will actively inquire how a company is helping to create a better world with its products, services or donations of time or money, and how this will impact them. They will want to know what causes a company supports, and how they support it, such as what percentage of the budget is allocated or how the time-off policy accounts for time donated to altruistic causes. Companies should relook at the employment section of their website and highlight these. Those that clearly show how a new employee will be joining a company that takes social responsibility seriously will be more effective at appealing to the top tier of younger generation job seekers.

• Engaging the Imagination - Consider the life experience for someone born in the late 1990s. The internet had already arrived; social media became mainstream in 2004; Smartphone technology has made distant people and complex information instantly available to them throughout their entire life. Change has been a constant in their life -- big change. Inspiring change. The industrialization-oriented mindset that is the norm for baby boomers who now hold most senior management positions does not exist for them. Therefore they need to be part of big, inspiring change in their daily work to fully engage their imagination and their enthusiasm. Companies that focus on what projects a new employee might be part of -- in addition to their daily job--that would inspire and appeal to their desire to be part of the next great change will be inherently more appealing to them. These should be front and center of the conversation when you first meet these candidates. It's key to getting the best and brightest among them to engage with you at crowded job fairs where every company talking salaries and benefits.

Collectively these three areas represent a major change in how companies recruit top talent--everything from how they communicate with them to what information they put into company Human Resources brochures. Taimour Zaman offers several actionable insights: "In addition to taking a hard look at their culture and policies, they can increase training and employee development funding, or work more closely with academia. This shows candidates that the company cares about their personal growth. They can align with organizations that have meaningful social causes, preferably those causes that help them sell more products or services. The younger generation does understand that it is still about making money, but they don't want to work for a company that is more focused on bureaucracy and maintaining legacy systems at the cost of helping create a better world." And the ability to discuss and explain these things must go beyond Human Resources to include ever person the candidate will interact with during the hiring process.

Research backs this up. 65% responded that personal development was of the most influential factor in staying at their current job. 22% viewed training and development as the single most valuable benefit an employer could provide. 30% of millennials rate meaningful work as what most motivates them. Combine this with 43% of them believing they could easily find another job if they left their current employer and it becomes clear just how much power over an employer these candidates (and employees) believe they have--justified or not (2). This often rubs senior executives from older generations the wrong way.

Yet, there is an intersection between the wants of today's social consumer job seekers and corporate objectives beyond just the ability to acquire and retain top talent. Well crafted corporate policy, tightly aligned with the desires of an increasingly powerful group of buyers, can be communicated and amplified via the social and mobile technology these consumers love. This allows even the most mundane of brands to begin to market as a lifestyle brand, reaching more consumers, creating the deeper connection between consumers and companies that these consumers desire, earning greater loyalty and thereby increasing profitability. But this requires a greater understanding of social consumers than most brands currently have, something these millennials have no shortage of.

Those companies that become most effective at communicating and connecting with today's top talent will not only be acquiring the best leaders of tomorrow, they will also be acquiring a better way to connect with the hearts, minds -- and wallets -- of tomorrow's most powerful group of potential customers.