If you're an American sick and tired of the endless, mind-numbing, and at times embarrassing campaign commercials being run by Republican and Democratic politicians, it wouldn't be the first time. Campaign season in the United States is exciting for many people out there, and its a time when the average American can actually hold their elected representatives accountable for their performance. But all too often than not, the excitement gives way to annoyance when the month of October comes around; the final few weeks of campaigning get stale, and a lot of Americans want the TV commercials and robo-calls to stop.

Midterm elections are typically about domestic issues like the economy and immigration, and are increasingly seen by political analysts and pollsters as an indictment on the president and his party. Yet this Tuesday's midterm elections are not simply about the United States. Indeed, by virtue of America's superpower status in international affairs, millions of people around the world will be tracking the polls and watching the results. And three countries in particular, all of whom reside in the Middle East, will be glued to the television as the votes are counted.

1) Israel - As Washington's strategic ally in a chaotic, bloody, and violence-prone region of the world, Israelis shouldn't have anything to worry about after the midterms are over. Regardless of whether Republicans take the Senate or Democrats hold onto it, U.S. policy towards Israel will not change; Congress will continue to allocate over $3 billion to the Israel Defense Forces, military collaboration will continue as scheduled (if not deepen), and the special-relationship between the United States and the Jewish state will endure.

There is one man, however, that will be watching the midterms closely: Israel's top politician, Prime Minister Benjamin Netanyahu.

Support for Israel is one of the few bipartisan issues that has survived Washington's gridlock over the past six years. Yet for Bibi, a Republican victory at the polls on Tuesday could very well be a chance for the Israeli premier to increase his leverage with a president he hasn't gotten along with well.

Although his professional relationship with President Barack Obama is functional, his personal ties with the president are mediocre at best. The two men have never been in synch when they have appeared together in public, and even the simplest of diplomatic formalities--like a group picture in the Oval Office--can devolve into awkward lecturing about Israel's settlement policy or Israel's status as a Jewish state. Despite the Obama administration's attempts to deny a significant breach in policy between the United States and Israel, President Obama and Prime Minister Netanyahu have vastly different views about what should occur in the region. For Obama, Israel needs to stop building settlements on the same Palestinian land that forms the foundation of a future state. For Netanyahu, Jews have the right to live anywhere in Jerusalem. A diplomatic agreement with Iran that stops that country's nuclear program is seen by the White House as a foreign policy accomplishment that could solidify Obama's legacy as a leader. Netanyahu, in contrast, considers any diplomatic agreement with the Iranians as an unwanted and dangerous capitulation unless all uranium centrifuges are destroyed and all facilities are shut down.

And then there's that infamous "chickens*^t" comment by an administration staffer, which surely didn't help the Barack-Bibi relationship.

A Republican-majority Congress will allow Netanyahu & Company to bypass President Obama and appeal directly to a House and Senate leadership that is much more in-line with Bibi's thinking on these issues. As Barak Ravid of Haaretz notes in his latest column, "Netanyahu is either convinced, or trying to convince himself, that Obama will have limited room to maneuver following a Republican victory. He believes that a Republican victory could help him thwart what Obama and his people have declared is the most important issue foreign policy issue during his second term as president." 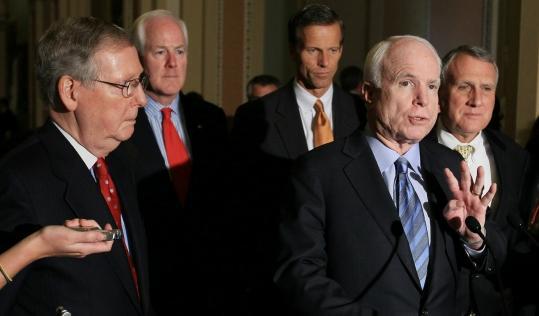 It's safe to assume that Netanyahu is a closet Republican rooting for a Republican victory.

2) Iran - The Iranians have just as much interest in the midterm elections. If Harry Reid and the Democrats keep the Senate, any new Iran-sanctions legislation that Republicans file will be stalled until the P5+1-Iran negotiations are completed. A Mitch McConnell-run Senate would not be so patient.

After nearly a year of intense negotiations between U.S. and Iranian diplomats, both sides are trying to find some way out of a nuclear dispute that could conceivably lead to an armed conflict. A diplomatic bargain would be the best way to achieve that, which is precisely why Iranian President Hassan Rouhani and U.S. President Barack Obama have invested so much in this outcome. The problem, however, is that if negotiations are extended for a second time past the November 23 deadline, Iranians will be forced to content with a Republican-controlled Congress that was never incredibly supportive of the Joint Plan of Action in the first place.

It will be a lot more difficult for Iranians to receive the legislative sanctions relief that they are looking for if Republicans are allowed to set terms for the debate than if Obama's own party kept their majority. The White House could still waive the sanctions that have degraded Tehran's economy, but it would take an up-or-down vote in Congress for those laws to be abolished from the books permanently. On this specific issue, it would not be surprising if Rouhani is just as concerned about a Republican triumph as President Obama and Secretary of State John Kerry.

3) Iraq - The new Iraqi Government of Prime Minister Haider al-Abadi is in desperate need of U.S. assistance. Since August 7, President Obama has deployed roughly 1,400 U.S. troops to advise and train the Iraqi Army after its disastrous performance against the Islamic State last June, and the Pentagon has launched hundreds of airstrikes on ISIL targets since that time.

While these actions may seem significant for Americans, they aren't sufficient for the Iraqis who remain under siege from ISIL militants. Airstrikes haven't stopped hundreds of Sunni tribesmen north of Ramadi from being detained and slaughtered by ISIL over the past several days. Nor have they provided the overstretched Iraqi security forces with the sufficient time and space to claw back territory or gain the trust of Iraq's Sunni Arab community. Republicans like Senator John McCain, who will take the chair of the Armed Services Committee if Republicans win the Senate, have called for the deployment of more U.S. trainers, U.S. Special Operations forces, a heavier pace of airstrikes, and a greater sense of urgency in general. And that's not even mentioning Syria, where a no-fly zone and more arms to the moderate Syrian opposition have been floated as serious proposals by McCain and his fellow Republicans. Bob Corker, who would rise to Chairman of the Foreign Relations Committee, has advocated for similar policy changes.

Haider al-Abadi and his newly-formed cabinet will be watching to see if some of the policies that Republicans have called for will actually come to fruition once a new Republican-majority Congress is sworn in.