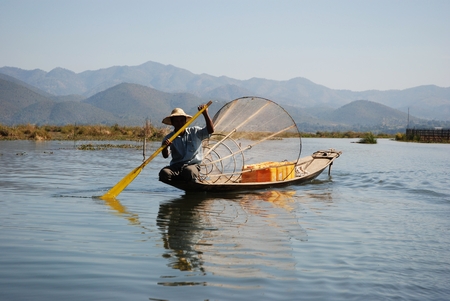 As many are recognizing, Myanmar's position as a resource-rich, emerging market presents a unique 'greenfield' opportunity (to build from the ground up). Change is occurring at a rapid pace as the country opens its borders to global trade, creating a blossoming entrepreneurial environment. When researching the economic climate and business culture of Myanmar for my book, Access to Asia, many interviewees emphasized the importance of cross-cultural awareness, respect and collaboration.

I also interviewed my brilliant colleague, Aquatic Biologist and Research Specialist, Kristen Eggers, who was indispensable to the success of Access to Asia, for an environmental perspective on the situation. She pointed out to me that, "Myanmar is one of the largest fishing powers in the world. According to a study by the Food and Agriculture Organization (FAO) of the United Nations, it was the world's 3rd largest fishing producer in 2014 for inland waters, and 10th largest for marine waters."

Kristen continued by noting that the bordering Bay of Bengal is the largest bay in the world, and the Ayeyarwady River (or Irrawaddy River), which runs through the center of the country, is among the top 100 largest. According to the FAO, Myanmar's population of more than 50 million people depends on fish and fish products for almost a quarter of their total animal protein. "Can you imagine the impact of this amount of fishing on local coral reefs and river ecosystems? And the importance of managing this industry efficiently?" Kristen asked. "No wonder scientists, businesspeople and government figures worldwide are turning their attention to Myanmar."

As Kristen pointed out, global ocean scientists such as Douglas N. Rader of the Environmental Defense Fund, already have boots on the ground in Myanmar to begin collaborating on sustainable fishing initiatives. However, since the country has just recently opened its borders, the importance of cross-cultural awareness cannot be emphasized enough. For anyone interested in building relationships in Myanmar, the following are three key tips for initiating successful business relationships and environmental efforts:

Kristen also added, "From an environmental perspective, which is dear to my heart, I sincerely hope that everyone contributing to the country's future will cultivate a mindset focused on sustainability and the conservation of Myanmar's abundant and breathtaking natural resources."

Our hope as global citizens is that the Myanmar people's strength and determination, coupled with worldwide collaboration and support, will result in a thriving, well-functioning economy.

Kristen Eggers is a Research Specialist with Protocol & Etiquette Worldwide who served as a contributing researcher for the multicultural guidebook, Access to Asia. She graduated from the University of California at Santa Barbara with a B.S. in Aquatic Biology and Cum Laude honors. Her love for the ocean has led her to conduct marine research with the Partnership for Interdisciplinary Studies of Coastal Oceans and the Surfrider Foundation. She enjoys inspiring others about science and world cultures through her research and writing, as well as education and outreach programs. Feel free to connect with Kristen at www.linkedin.com/in/kristeneggers or follow her on Twitter @kristen_eggers8.