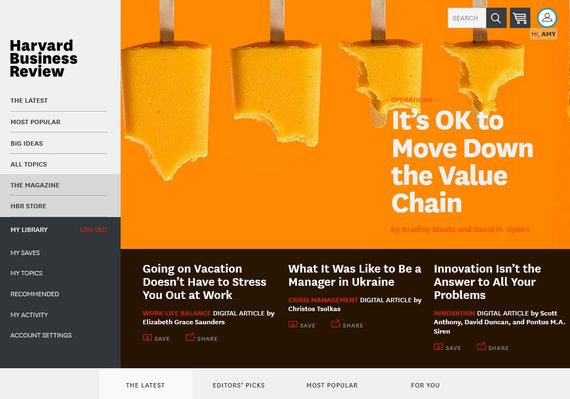 In a couple of months, I will be celebrating my ninth anniversary at Harvard Business Publishing. My co-author on this piece, Eric Hellweg, now the managing director of digital strategy at HBR, had joined just six months earlier as HBR's first online editor. The two of us were part of a small wave of mainstream media types who would join the company in an effort to reinvigorate its online publishing efforts.

The goal was to build a digital publishing division that leveraged the best of HBR (great ideas, editorial team, and brand), but adapted the brand to the digital world on a totally different scale. HBR had always reached hundreds of thousands; with the web, it could reach millions. But how?

Eric and I have spoken about the lessons we have learned throughout the last nine years for FIPP, as well as other organizations. We wanted to capture these thoughts in a column so that we could continue the conversation online. We look forward to hearing about your views and experiences. But before we dive in, we need to stress a couple of important caveats.

Let's be clear: We still have a tremendous amount to learn. HBR is lucky to be in a position of growth, but the path forward is far from certain. We still need to test, learn, and adapt constantly.

Moreover, we would not have come this far if it weren't for the efforts of our editor-in-chief Adi Ignatius and his team. This isn't just kissing the editorial ring. The strength of an editor-in-chief who can uphold the values of traditional publishing while simultaneously defining a whole new publishing ethos digitally cannot be understated or underestimated. If you aren't starting here, proceed at your peril.

Where have we come from...

When we joined the publishing company, the magazine was everything. It came out 12 times a year. The website sold PDF article reprints, and HTML versions of magazine articles were exclusively for subscribers. End of story. In retrospect, by today's measures there really was no website. No online advertising. No online discussion about our articles. Not surprisingly, just after Eric and I walked in the building, HBR.org was featured on a site called WebsitesThatSuck.com.

Today, the brand reaches millions digitally with close to five millions fans and followers through various social media around the globe and nearly 300,000 paid subscribers. Our business is fully integrated across print and digital and stronger than ever. HBR.org is a go-to destination for millions of top executives around the world, and the magazine is artful, energetic, and still brimming with the strong managerial ideas that have inspired countless executives since its founding. Best of all, print and digital are becoming more and more intertwined, benefiting both the reader/viewer and contributor.

So, how did we get this far?

Scaling a digital operation within an existing business is complicated, tough, and sometimes exhausting. But we've tried to boil it down to the three most important takeaways. Not surprisingly, much of this comes from the pages of our own books, magazines, and website. Here goes:

3) Be obsessed with the customer

One of the toughest parts about starting a digital business inside an established one is that it's almost impossible to predict the future. Everyone in your organization knows the core business extremely well. Defining this new digital entity feels like a daunting task.

But this anecdote, which I first heard from Harvard Business School Professor Ranjay Gulati, helps to put the challenge into perspective. The story is about a group of hikers that gets lost in the Alps. After days of wandering, one of the hikers finds a map deep in his bag.

The weary group then finds their way to safety. After celebrating for a few days, someone in the contingent takes a closer look at the map and realizes that it's a map of the Andes, not the Alps.

The moral of the story is simply that people need a map -- even if it's not the right map. Rita McGrath, a professor at Columbia Business School, and her co-author Ian MacMillan, a professor at Wharton, makes this point but in a slightly different way in Discovery Driven-Planning.

They point out that platform businesses or established businesses get pretty darn good at predicting the future. But new businesses must make assumptions and those assumptions are often wrong. The trick is in having a culture that is okay with making mistakes and learning as you go. All of this is fine as long as you have defined what it is that you think you want to be -- even if it turns out that you were wrong. Sounds a bit confusing, but it works.

For us, we also tried to rally our team around the notion of forget, borrow, learn. This is a framework that Chris Trimble, who is on the faculty at Tuck, and VG Govindarajan, a professor at Tuck, discuss in Building Breakthrough Businesses Within Established Organizations.

For example, we knew that we wanted to "borrow" the brand and that we wanted the site to still have the best management ideas in the world. But the long lead times to create an article every day would need to be "forgotten" if we wanted to publish frequently online and build up a following. We also needed to learn about the relationship between print and digital -- something we are still learning about.

One last thing: I've since heard Nick Candler, the COO of Pret A Manger, talk about starting new initiatives inside of their existing businesses. He said that internally they refer to new experiments as "Pioneering Pret" versus the existing efforts, which are called "Best of Pret."

This is terrific because part of the friction between new versus existing lies in the way we inadvertently make one feel superior to the other; Pret has found a way to make both sound attractive and exciting.

Building a strong presence on the web doesn't happen overnight. More often, online businesses incubate for years -- think Google and Facebook. Or perhaps the company has a tortured path of ups and downs -- think Apple. Yet the myth of the quick hit persists.

This makes it all the more difficult to protect your new digital venture from the tyranny of time. We have seen countless magazines drop millions on digital initiatives with the intention of a linear payback period. It's amazing how quickly a massive infrastructure can grow up around a web venture before it's truly capable of scaling -- or before it even has a strong sense of what the customer desires.

For us, we started slowly, experimented, and looked for ways to grow the business while mitigating the downside risks. The growth of digital has now helped to bolster the value of print, but it took us awhile to figure out how.

Let me give you one example. Early on, we would sign up subscribers to the magazine from our website, but we found that many of the customers who came to us from the web were disappointed with their subscriptions. That's because early on our website and the magazine were totally separate entities with very different voices. Once we united the web and print organization and redesigned both print and web to harmonize better, we saw better results. Today, the website is our top source of new customers. But that took us a few years to figure out.

Become obsessed with the customer

In many ways, the audience had been taken for granted at HBR. We probably had a "if we publish it, they will come" mentality for years. On the web of course, where the options are limitless, the old model just didn't hold up.

Of course, we still work hard to provide the right publishing environment for our authors. But we're equally concerned with respecting our reader's valuable time. Early on, we set out to engage readers in a conversation online -- not unlike the idea of participant centered learning, which is the bedrock of the business school case method that had been pioneered at HBS.

To engage someone online takes a totally different set of publishing muscles. It also requires a constant balancing act between serving up what we know will get clicks versus what we think is important for the audience to know.

And so we began with a few deliberate approaches all designed to make us better informed about what our audience needs and how they value us. We launched an advisory council, talked with users constantly -- especially during key development cycles of our website -- invested in data and analytics and so on. We never abnegated our editorial responsibilities; we just made room for the customer's voice.

At the outset of that redesign effort, we documented and codified how we wanted to treat the customer. Here are the seven "User-Centricity Tenets" we came up with, which we pretty much plastered everywhere:

3. We are not the users. Think from the outside in.

4. Always speak to our users in a consistent, friendly, respectful tone.

5. Test, test, test will be part of all launch activities.

6. Prioritize a long-term relationship over a short-term transaction.

7. Whenever possible, prioritize users over other stakeholders.

In many ways these tenets served as our "North Star" during that long and complicated project. They helped guide decisions large and small. To be sure, we've done a better job of upholding some tenets than others, but we're still working off of this playbook and always trying to improve our success at meeting the needs of the users.

While it's important, as we've just mentioned, to stay patient with your digital activities, just getting started is equally important. It's easy to get caught up in long planning cycles and huge strategic plans at the expense of the learning that can only come from getting out there and doing something.

The story of the Choluteca Bridge in Honduras illustrates the risk of planning over action beautifully. Honduras is often hit by devastating hurricanes that knock out the bridges and paralyze the region. In the early 1990s, the engineers came together to build a bridge like no other -- one that would stand up to the worst hurricanes. They were successful. After Hurricane Mitch hit Central America in 1998 the Choluteca Bridge was indeed still standing. But there was just one problem. The river moved: 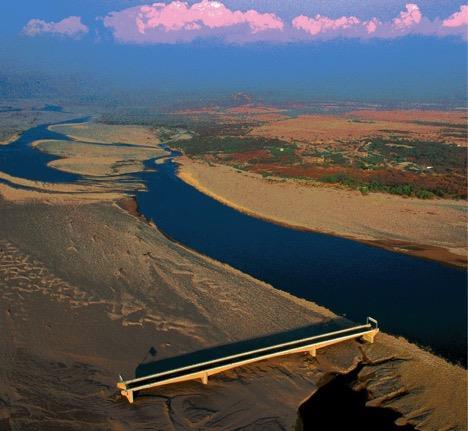 Building the perfect structure is fine, but when the world changes, you need to be adaptable. The web is in constant motion, bending where it pleases. Spending too much time in planning mode and ignoring the job your customers are hiring you to do may lead you to a bridge to nowhere.

Publisher of the Harvard Business Review