"There's only two types of people in the world.
The ones that entertain, and the ones that observe." -- Britney Spears 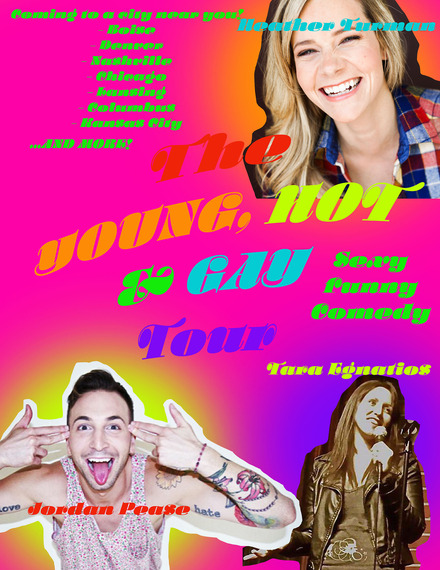 January 2014 came faster than expected. It feels like just yesterday it was 80 degrees and sunny. Wait, that was yesterday. For most comic Angelenos, one's typical travel mishaps come along the lines of traffic, construction, and the occasional Lakers win at The Staples Center, delaying our arrival to a gig on Sunset Boulevard.

This trip, this tour, the start of this year is going to be waaaay different.

Mother Nature is surely a growing woman. In Los Angeles, she's postmenopausal, throwing an occasional hot flash out of season or some sudden shaking. However in the peak of winter, crossing the Rockies and wandering just miles from the Canadian border, she's a real bitch. In Denver, Mother Nature comes in the form of Stephen King's Carrie, circa shower-period-tampon fiasco. Unexpected and messy, she's going to tear you a new one!

January 7, Heather Turman, Tara Egnatios and I hit the icy winter road to commence the start of our month long comedy tour, appropriately titled The Young, Hot, and Gay Tour. Young, yes, all in our early to mid-twenties, Gay, well that's for sure! Have you seen our flyer? It's covered in floral print and plaid. Hot, well let's just say marginally attractive wouldn't fit on a comedy club marquee. Hey, sex sells.

Hitting the road, short and blunt (much like us), hides so much within its letters. How do you define a phrase that signifies a journey you'll be taking for the rest of your life? Hmm. In daylights, in sunsets, in midnights, in cups of coffee?

Hitting the Road, verb -- traveling a distance in order to reach a desired destination

If Heather, Tara and I were socks, we'd all hide in your laundry differently. Heather, maybe a pair of knee-highs covered in static, stuck to the door. Tara, some fuzzy grey socks with a hole in the heel, the one's you've had since you were a kid, the one's you've been "meaning" to throw away. Somehow they just keep ending up on your feet while their still warm. "Where is that sock, I just don't get it? How does a dryer eat socks? I'm stuck with 23 mismatched singles!" That's me. Either way, us socks are getting shoved in the same drawer.

A comic's biggest fear is being pigeon holed. Wary at first, an all-gay comedy tour petrified me. Oh God, It's already happening. Like an African American comic planted on a "Soul Night" show, or a female comic opening on for the week long "Lusty Ladies" comedy showcase, you question how will your material differ? What will make me stand out? How will I be a variable -- for 30 days?

Then, like an acid flashback, out of nowhere something hit me. Yes, we are performing at a few gay bars along the way. Yes, we are trying to draw awareness to LGBT Centers and the positivity they provide, and yes we are all gay. But we are not "gay" comics. We are comedians, who just happen to be gay.

Our stories are different. Our punchlines are diverse. Our deliveries are dissimilar, and our styles vary. So why am I afraid of feeling alike? Why am I suddenly scared to fall in line with my own community? Has the entertainment industry warped my mind with this mainstream demographic bullshit?

Most of my comedy career has been spent bouncing from big city comedy clubs to noisy urban straight bars. I've dedicated my time to perfecting material for audiences like Vegas, San Diego and frat boys. What punchlines hit hard at rural comedy club in Tennessee? Which ridiculous puns will a gay bar in Kansas understand and love? I've got to start thinking outside the box.

Hitting the road January 7 to February 7 with Heather Turman and Tara Egnatios gives me butterflies. Spanning most of the Midwest and a few stops down south, my eyes have no idea what to expect and my brain won't stop writing Taylor Swift Drag Queen jokes.

I'm eager to show our different styles of comedy to a different sense of community. I'm excited to open up our own community to the eccentric humor I know the center of The United States harbors. But mostly, I'm pumped to spend 30 days with two comics whom I know will have my back throughout the entire messy ride.

There are a million different people in this world. We are all shoved into some sort of drawer, but that drawer rests in something bigger -- a dresser. We are one community. Human beings. You laugh, you love, and then you die. What was I afraid of?

Join us on the time of our life.
Instagram @jordanpease1