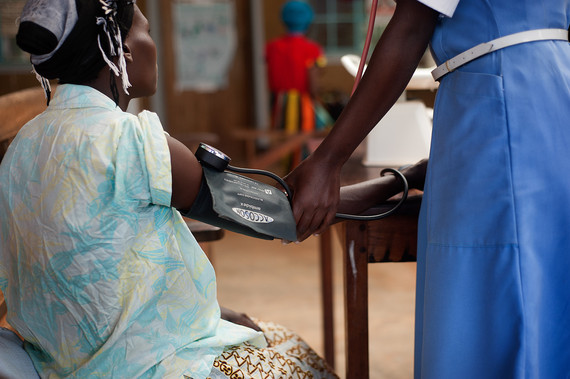 Photo: Uganda is just one of many countries suffering from a major shortage of health workers. By Will Boase for IntraHealth International.

Today there is a global shortage of 7.2 million health workers. The World Health Organization and World Bank estimate that if we're to have any chance of attaining universal access to health care by 2030, we'll need to train and deploy 40-50 million new health and social care workers worldwide.

The shortfall is staggering.

But the solution is more complex than just recruiting more health workers. And the shortage isn't the only barrier that keeps people from having access to care. In our interconnected world, we can't address the health worker shortage from inside the bubble of global health--seemingly unrelated world events and trends have a huge impact on health care around the world.

Here are just three of the global issues in the news right now that we cannot ignore if we're going to solve the health workforce crisis:

Terrorism destroys innocent lives and infringes on one of our most valuable human rights: access to health care.

Unchecked, terrorism can slow economic growth and hinder human development. Even in highly developed countries such as France and Belgium, terrorist violence can overburden the health systems and leave health workers scrambling to treat unfamiliar types of injuries quickly and en masse.

Attacks during the last six months in Mali and Cote d'Ivoire may not have garnered the same global attention as those in Paris and Brussels, but they will likely have a greater impact on the countries' economies and development. Tourists become scared to travel there, businesses suffer, and countries already struggling to meet the basic health care needs of their populations have to divert valuable resources to emergency response.

As the refugee crisis in Europe continues and violence displaces millions of people around the world, we should strive more than ever for universal access to health care. We should put in place social protections for the vulnerable, introduce financing mechanisms that make health care affordable, and strengthen community health programs in affected countries.

More than half of the world's people now live in cities--including more than half of our health workers. People who live outside of urban centers have always had a more difficult time getting access to health care (the Ebola crisis in West Africa began in rural areas partly for this reason). Yet even in the cities, the poor still do not have as much access to hospitals and private clinics as other city-dwellers do.

But the news is not all bad.

With urbanization comes better infrastructure, which means greater access to care in general. It's also a sign of a growing global middle class, meaning that more people can afford care, medicines, and contraception (which is in particularly high demand in cities).

As our urban populations grow, so does the need for health services, health workers, and more community health programs. We can help by making community health programs an integral part of the health system (particularly in rural areas) and by making sure health workers' preservice education covers such timely topics as how to work with internally displaced populations, how to promote resilience in their communities, and how to pursue multisectoral interventions.

Health workers have so much power in their communities, though they often don't know it. In rural settings, in particular, the few health workers that do exist are cherished, and their voices are much respected.

They have the power to encourage male clients to treat their wives as equals, rather than abusing them. To sway women's decisions about which contraceptive methods are right for them. Or to act as engines for economic growth as they keep their communities healthy, happy, and productive.

The health workforce itself can be an incubator for gender equality. Too often, though, barriers to education for girls, unintended pregnancy, or gender bias in the field can prevent women from joining the health workforce. This drastically reduces the pool of qualified workers and exacerbates the shortage.

Better preservice education can open up health workers' world views, make them more aware of their own power (and biases), and help them become the agents of change they truly are. Armed with new knowledge and adequate numbers, they can move beyond simply treating specific diseases to promoting true well-being and equality in their communities.

To help solve this monumental shortage, the World Health Organization will introduce a first-of-its-kind global strategy on human resources for health--Workforce 2030--at the World Health Assembly in Geneva this year. It outlines some specific workforce-related targets we must pursue to make the most of the health workers we have now and to anticipate the health workforce we'll need in 2030, when our world population could reach 8.5 billion.

Health systems are more than just buildings and policies. Their raison d'être is people--both those who seek health care and those who provide it. And as we celebrate World Health Worker Week April 3-9, we're celebrating all those who promote greater health and well-being around the world. Investing in them is our best chance at achieving the Sustainable Development Goals.

You can be part of this solution. If you are reading this in the United States, you can contact your Representatives to support the bipartisan House Resolution 419, led by Representatives Nita Lowey (D-NY) and Ander Crenshaw (R-Fla.). The resolution urges greater global attention and support for local frontline health workers and reaffirms their critical role in ending preventable child and maternal deaths, ensuring global health security, achieving an AIDS-free generation, and more.

You can also donate to IntraHealth International, which focuses on health workers as the key to expanding health care to everyone everywhere.

But we must do something. This is a problem we cannot ignore.