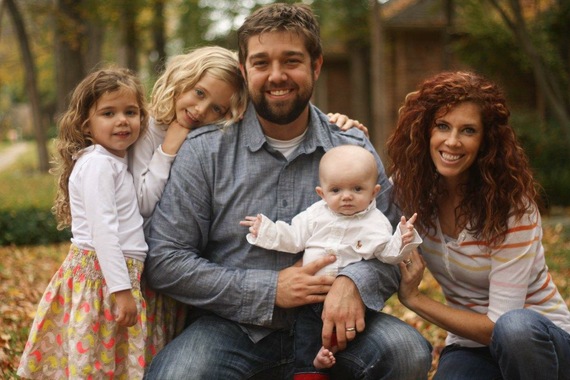 Just minutes after meeting Chris, I was captivated by her story.

Chris is from Dallas, and she graduated from Truett Seminary at Baylor University. She's married to Brett, and they have three beautiful kids.

When Chris isn't writing books, she's speaking at retreats, blogging, or calling poison control on a semi-regular basis (check out our podcast interview with Chris for more on that).

A few years ago, Chris got involved with an organization called Jesus Said Love. This particular non-profit works to love and connect with women in the sex industry.

She didn't come into strip clubs waving her Bible like a battle axe, but instead came in looking to make new friends. It wasn't long before Chris was laughing, crying, and sharing life with these women that she now loves deeply.

There's plenty of valuable lessons to learn from this single element of Chris' life, but there's even more to the story...

Chris' oldest daughter, Ellia, has been diagnosed with a rare, life-threatening genetic disorder. At any given time, Ellia's entire muscle structure breaks down and she's paralyzed for days, or even weeks, at a time. It's excruciatingly painful for Ellia, and it's gut-wrenching for her parents.

As if Ellia's condition weren't enough, Chris' son was born prematurely with a 3 inch tumor in his liver.

When Chris and Brett adopted baby Owen, he was six weeks old. Owen had been exposed to meth every day during utero, and the doctors weren't sure if he would make it to the age of 4 months. Owen just turned 20 months old, but his tumor is inoperable...so the battle is far from over.

Between Ellia and Owen, Chris is in the hospital at least twice a month. And with each hospital visit comes the terrifying reality that she could be going back home without one of her babies.

Yet, as dark and painful as her story seems, Chris chooses hope. She wakes up every day, and she cherishes the time that she has with her family.

While interviewing Chris on the Inspiring Awesome Podcast, she taught me a few things.

Here are three things I learned from Chris that day:

Everyone's life is messy in some form or fashion. Yet, we continue to wear masks that tell the world we have everything together. Take the mask off and just be real.

Being open and vulnerable about life's messiness frees those around you from the impossible standard of perfection. (Click to Tweet)

Chris does this exceptionally well, and it forces those around her to drop the pretense and be themselves.

2) Your circumstances don't define you

Chris is constantly telling her daughter Ellia that she's not defined by her sickness. She would consistently tell her friends in the strip clubs that their identity wasn't in their occupation.

When we find our identify in our circumstance, we miss out on the opportunity to make our tomorrow better. By choosing to rise above our circumstances, we become a beacon of hope to a world that needs it.

3) Stop having an "Us and Them" mentality

When Chris was spending time with women in strip clubs, she didn't view herself as any better than her new friends.

She saw them as women who were journeying through life just like she was. She saw them as fellow diaper changers, laundry washers, and sacked lunch makers.

Chris' mentality allowed walls to come down and friendships to form with women that desperately needed love.

My words will never do justice to Chris and her family's story. To hear the story straight from Chris, check out our interview with her on the Inspiring Awesome Podcast. To reach Chris directly, connect with her on Twitter.

My hope is that Chris' story motivates you to take actions in your own life that make the world more awesome.

James Carbary is the founder and co-host of the Inspiring Awesome Podcast on iTunes. When he's not interviewing world changers or eating Swedish Fish, James is helping companies build blogs that increase sales.

Know someone that inspires awesome?

Connect with James on Twitter or LinkedIn, and let him know!