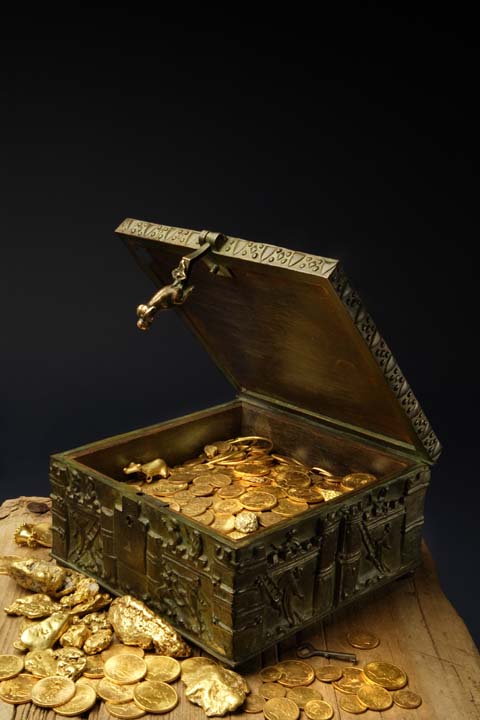 Forrest Fenn an almost 82-year-old millionaire art collector and former Santa Fe gallery owner hid a treasure worth $3 million (though it might be worth more now) and the treasure is still out there waiting to be found. The story, reported recently on both The Today Show and on NBC Nightly News with Brian Williams, has gone viral and has created a run on Fenn's book, The Thrill of the Chase (with nine clues to the treasure). The Thrill of the Chase, is now one of the bestselling books in America and reached number 15 on Amazon's Top 100 List. It is selling on ebay for $500. The book started selling at four per minute and rapidly went out of print. (There have now been a third printing of 7,700 copies and a fourth of 7,700 ten days later). Fenn is not making anything from the book -- he has donated them all to Collected Works bookstore.

Over spring break, 6,000 people came into Santa Fe to treasure hunt. No wonder. The treasure includes 265 gold coins, hundreds of gold nuggets, some weighing more than a troy pound each, prehistoric gold fetishes, a 2000 year old necklace made of carved quartz crystals and other semi-precious stones, hundreds of rubies, diamonds, emeralds, two Ceylon sapphires, and two ancient Chinese carved jade figures. (There are 20.2 troy pounds of gold in the chest and the price varies every hour. Some of the coins have numismatic value beyond the value of spot gold). The treasure chest also includes a 20,000 word autobiography in a glass jar, protected from the elements and printed so small that a magnifying glass is needed to read it.

Why did he hide a treasure? Diagnosed with cancer and losing a kidney in 1988, Fenn was given a 20 percent chance of living three years so he decided that if he had to go, he would just take it with him.The cancer went into remission, but Fenn went ahead and hid the treasure somewhere in the mountains north of Santa Fe. 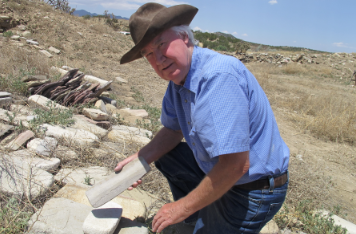 The chase was on and thousands emailed Forest Fenn searching for additional clues. One searcher got lost and ended up spending the night in Bandolier National Park (she was rescued the next day). But the world is full of naysayers and Fenn is being accused of being irresponsible -- as if it were his fault a seeker was lost or that someone dug a hole in a national park. This is his response to the criticism:

This is going to get me in trouble but I have to say it. The following words have nothing to do with the treasure chest I hid, and they will give no hints or associations to its location.

Searching for hidden treasures in the mountains is enjoyable. It brings families together, it promotes bonding and it gets kids off the streets, out of the game rooms and away from their texting machines. During rough economic times, it provides hopes and dreams where otherwise they might be lacking. It is both healthy and mind expanding. And it utilizes the great outside for the purpose it was intended. I have 14,442 emails that have told me those things.

I am sorry that someone was arrested for digging a small hole in the ground. In the scope of world events, surely it should not have made the front page and NBC news. It is beyond me why anyone would want to prosecute that man. If I were his judge, I would fine him ten bucks and tell him not to do it again. What has happened to our basic senses? There are those who will tell me that I do not understand the problem, and they will be right, I don't.

Let us put things in perspective and look at them from a different slant. There are 654,885,389 acres of land in the United States that are owned by the American people. That is what the federal government admits is "public property." And the population of this great country is 313,914,040. After doing the math I learn that my allotment is exactly 2.086 acres.

Now, what if I wanted to secret a can of Dr. Pepper under a rock in the cooling waters of a rivulet somewhere in my allotted public acreage? If I did, I would not need to use all of my area, I would need just 7.5 fluid ounces and 90 calories of space. And I would still have about 2.08555 acres remaining. Seems fair to me but would I have broken the law? Yes or No? If yes, then let us change the law because who knows where that nonsense could end. If no, then why are we getting so excited about the little things?