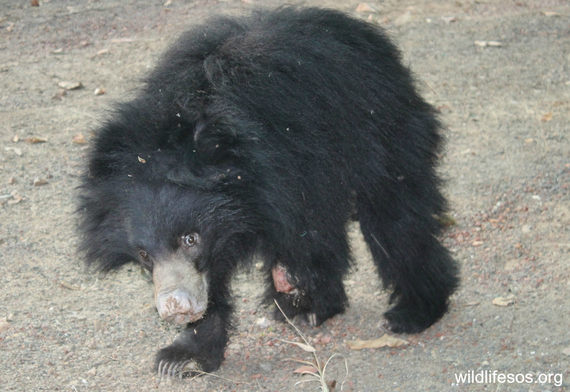 Mortality is a daily reality for animals in the wild. In the rules of nature, fairness and morality have no role in an animal's fate. However, humans have changed the rules of survival for wild animals so drastically that we find it is our ethical responsibility to take action and intervene in many situations. In the last year, we at Wildlife SOS have treated a hyena bludgeoned by villagers, rescued leopard cubs scorched by human-induced fires, and fought in courts for elephants crippled from cruelty. Most recently, we rescued a bear cub mutilated for life by a snare.

You may have heard of this cub -- we named her Rose -- as word of her tragic situation quickly got around the Internet last month. It happened like this: We got a call about an injured bear that needed serious medical attention, and deployed a team to an area near Amoni village in central India. What we found was a sloth bear cub only a few months old who was bleeding from a purulent stump on her front leg. Her limb had been completely severed proximal to the paw. Her mother was missing, and Rose's only chance of survival was for our team to intercede. So the whimpering and traumatized little bear was removed from the wild and taken to our facility.

Being the likely victim of a poacher's snare -- as was her mother -- Rose was lucky to even have this shot at survival. Each day, many animals are caught in snares and dealt similar injuries. Most will not make it. For the blissfully uninitiated, snares are basically booby traps set in wildlife areas. Once placed, they have no expiration date; snares placed decades ago have the ability to kill today, and snares set today can unselectively kill long into the future.

Snares are primitive and unsophisticated devices, but their use remains widespread because they can be made at almost no cost and can take down anything from small animals like rabbits and foxes to endangered elephants weighing thousands of pounds. Snare use might seem humane compared to shooting or poisoning, but make no mistake: it is not. Animals caught in snares often struggle for hours -- in some cases days -- before succumbing to thirst, hunger, strangulation, internal injuries, even predation from carnivores. Some, such as tigers, bears and leopards have even been known to chew off their own limbs in order to free themselves. Animals that manage to escape a snare often die days or weeks later as a result of their injuries. And this is not to mention the pain, terror, and anxiety that any snared animal will experience. 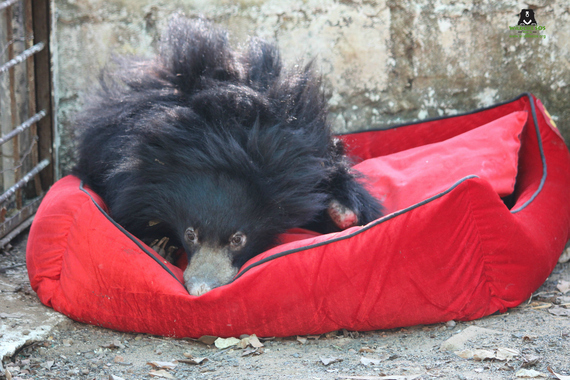 In Rose's case, the snare snapped the bone near her paw, ripping through her flesh in the process. Rose was only 3 months old and should have been with her mother (sloth bears usually stay with their mother for nearly 2 years). Since Rose was on her own when she stepped in the snare, it is likely that her mother suffered the same fate, and did not make it out alive.

And this brings up yet another troubling problem with snares: they are entirely indiscriminate. These archaic contraptions can't distinguish between a grown adult or a tiny cub. They don't distinguish between a "target species" like a coyote and a doe or otter, or an eagle, or someone's pet dog or cat. It is true that some areas have enacted legislation to promote a more humane use of such devices--for instance, mandating that snares be checked every day (in effect, limiting an animal's suffering to a mere 24 hours). But even these feeble measures, when not simply ignored by trappers, are difficult to carry out and impossible to monitor.

Thanks to that single snare -- one of millions set every year -- Rose will never be free again, even with the best veterinary care. She will never be able to survive in the wild with her severed leg. Rose will require lifetime care, and a sloth bear's lifespan can be as long as 30 years.

As an organization that focuses on helping wildlife, we are witness to animals under siege in myriad different ways. However, we have found traps and snares to be among the cruelest of human-created threats to wildlife. It is distressing to imagine the millions of animals that succumb to these devices every year -- and the thousands of them whimpering in a snare at this very moment.

We need to be honest about this practice, and stop pretending there is anything humane about it. We at Wildlife SOS do not condone any kind of hunting or trapping. Thankfully, it is illegal in India, but this does not stop people from flouting the law and inflicting pain and suffering on countless animals.

If you would like to take action against the use of snares in your community, here are a few resources:

Born Free in the USA.