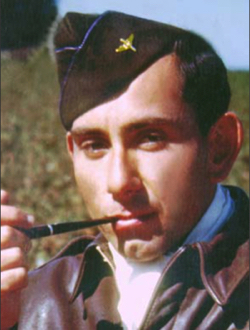 My great-uncle Steve was an NYU student from Brooklyn when the Luftwaffe shot him down over Nazi Germany in 1944.

Steve had flown 60 successful bombing raids over Berlin alone. On this trip, his luck ran out. A German gunner took out his engine and sent my uncle straight into the lion's den.

He crash landed miles outside Stuttgart and fell asleep hiding in some bushes as the Wehrmacht tore apart the area looking for him. When he awoke alone in the dark hours later, he started walking west, figuring he'd hit France sooner or later.

Apparently, you can make good time with half the Germany army on your butt and a decent tailwind. Steve spent a week playing cat and mouse with the extra patrols out looking for him. Upon finally crossing the border, he was arrested by American forces and interrogated for two days straight because they thought he was an assassin sent over to kill Roosevelt.

They finally shipped him back to England, where he went out on another bombing run the next day. Steve said he'd come to Europe to do a job and he wasn't going to let one crash distract him.

"How'd you keep from panicking when you woke up in the woods by yourself?" I asked.

"When the Titanic hits an iceberg in the middle of the night, you don't waste time complaining about bad luck," Steve said. "You start building lifeboats."

I thought this was a cool mindset. Growing up, we're not really taught about failure. We're pressured to be perfect, get good grades and play it safe. Many people fear failure and don't know how to deal with it, let alone overcome it.

No surprise, my uncle was one of the few people who supported me when I began working for myself. Here's what I've since learned about failure and success.

Failure isn't personal. It just means we need to tweak our strategy.

The first business I ever started tanked right out of the gate. Why? I hadn't done any market research. If I had, I would have immediately realized my target audience had no money and no interest in what I was selling.

In hindsight, this is hilariously obvious. But what did I know back then?

The second business did much better, because I'd learned my lesson the first time around. I also changed my business models at least twice and wrote a lot of bad networking emails before I ever wrote one that got a response. I only learned through testing things.

In a world where we feel so much pressure to always be the best, it's easy to forget that having an experience can be just as important as the results we get. Experience means lessons learned and forward motion, even if we didn't get what we expected.

Conan O'Brien, in one of the best graduation speeches I've ever seen, shares a painful story about failure. He could have curled into a ball and given up.

Instead, he used this difficult period to try new things. Some worked, some didn't. But he had a blast and learned a ton about himself, calling it "the most satisfying and fascinating year of [his] professional life."

Lesson #2: Use big wins and quick wins to your advantage

There are a million websites that talk about staying motivated. But the truth is, transformation takes time and energy, and it's easy to tap out. Feeling discouraged can set us back or knock us off course altogether.

That's why it's critical to know the difference between big wins and quick wins, and use them accordingly. They're the fuel that keep you rising to the top.

A big win is the type of success that means calling your parents. You got the raise, you got engaged, you paid off the mortgage.

Quick wins aren't terribly exciting, but they can make your day. You made a nice connection with someone new, you went shopping at the farmer's market, you got home early.

Big wins are rare (because they're so big) but they're life changing. A big win is a major leap forward for your growth.

Quick wins happen any time. They keep you energized and positive every day, but they're especially important during challenges.

When you're working on something massive and need to keep your spirits high, sneak in quick wins whenever you can.

Lesson #3: Focus on success, but set timelines for failure

You should go into everything with your eye on succeeding.

But if there's a chance you may fail, do it fast so you can assess your progress and regroup quickly.

I knew one mistake many business owners make is they don't test an idea first. That's why you hear horror stories about people spending years on a business that bears no fruit.

So I gave myself a month to find my first three clients. I'd learned from the first failed business and didn't want to waste time on a bad idea.

Within a month, I had my answer, and my first clients. But if I'd failed, I would have been able to quickly proceed to the next idea instead of wasting time on a bad one.

My uncle faced other setbacks: a stolen plane, getting shot down again (this time into the English Channel), and once limping home on an empty fuel tank and a prayer.

Yet he has great memories of his military career. Steve was born to fly, and he enjoyed even the rough bits because he was doing good work. To this day, he's still one of the most positive people I've ever met.

When he heard I was going into business, he said, "Great! We always gotta find a better way of doing things. Life's a game, kid."