The United States is bombing the Islamic State. The Islamic State is fighting Jabhat al-Nusra, Al-Qaeda's Syria affiliate that is also occasionally bombed by the United States. The Free Syrian Army (or what is left of it) is fighting the Islamic State, at times in coordination with Jabhat al-Nusra -- the same group that the U.S. is hitting with airstrikes. Bashar al-Assad is bombing everyone, including civilians with no links to insurgent groups whatsoever, but is often content with leaving ISIL unscathed in eastern Syria. The CIA is churning thousands of moderate rebel fighters in the south, while the Pentagon is failing to do the same in the north. Iran, Hezbollah, and an assortment of Iraqi Shia militias are involved on the ground as well, embedding and at times directing operations with Syrian government forces and pro-Assad militias to ensure that no more government territory is taken.

Add Russia's overt military engagement to this sh*tstorm, and the situation becomes downright dizzying. What was once a fully peaceful, nation-wide campaign of civil resistance and disobedience to President Assad's regime has long ago morphed into a proxy war that is more complicated than the 1979-1996 Afghan civil war. At least in Afghanistan, one knew who the bad guys were (the Soviets); in Syria, the bad guys (like al-Nusra) often team up with the good guys (the moderate or secular Syrian opposition units) to fight other bad guys (Bashar al-Assad and ISIL). Russian President Vladimir Putin's deployment of air power to defend Assad's regime creates another dangerous layer to this multifaceted, multi-sectarian, proxy conflict in the heart of the Middle East.

If the first three days of Russian activity are any indication, President Putin wasn't lying when he said that Syria's Government needed to be assisted in the fight against international terrorism. As Julia Ioffe put it in Foreign Policy, "When Putin said he was going to support Bashar al-Assad, he really meant he was going to support Bashar al-Assad." No world leader sends at least 32 combat aircraft, a couple dozen helicopters, and up to 2,000 advisers into a foreign land in the middle of a civil war if they don't mean business. For Putin, ensuring that a regime that has been a Russian client for the past five decades remains standing is a critical national security interest. Looking on passively as Bashar al-Assad continues to lose ground or the vestiges of his army continues to atrophy is simply not in the cards for Putin, particularly after he spent the past four and a half years protecting Syria from U.N. sanctions, an ICC war crimes investigation, and a military operation on Syrian army facilities that was close to being finalized in September 2013. After doing so much for a regime that may very well have been on its way out in 2012 without Russian support, it would appear foolhardy from Putin's view to simply pack up and go home.

Yet, with that being said, the Russian military build-up is indeed significant and historic. The fact that Moscow has chosen to help Bashar al-Assad in a more aggressive fashion -- above and beyond simply enabling the Syrian air force through the delivery of new fighter jets, spare parts or cheap gasoline -- is a testament to how important propping up Assad's government is to Russian interests generally and to Putin personally. Until several days ago, the last time Russian military forces deployed in an offensive action outside of the former Soviet Union bloc was in 1979, when tens of thousands of Russian soldiers swept into Afghanistan to save a Communist government fending off an insurrection.

The fast pace of Russia's actions over the past week is in direct contradiction to the sluggish response from the White House on what to do about the problem. Indeed, officials in the White House, State Department, and Defense Department seem genuinely befuddled about how to make it clear to the Russians that what they intend to do Syria is not only unacceptable on morale grounds but a distraction to the subject of getting peace talks among the Assad regime and the Syrian political opposition going. The day after Defense Secretary Ash Carter eviscerated Russia for making an enormous mistake, Secretary of State John Kerry appeared alongside Russian Foreign Minister Sergei Lavrov being cautiously optimistic about the start of a constructive political dialogue on the way forward. The administration, in other words, is all over the map. 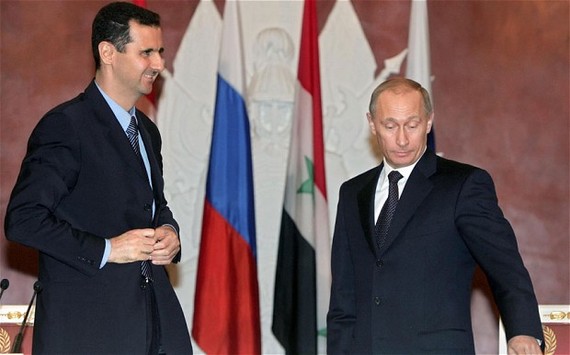 It's difficult to imagine what the United States could do at this point to counteract Russia's military intervention on the side of the Assad regime -- the very same regime that the United States, the Sunni Arab world, and the Europeans have been trying to push from power for the past four and a half years. But whatever policy that President Obama ultimately embarks upon, these four questions will need to be answered.

1) Is Russia Sincere About Fighting ISIL, or Is Their Main Goal Protecting Assad? If it's the former, Washington and the rest of the anti-ISIL coalition could open a dialogue and perhaps bring Russia in from the cold. If its the latter (every sign signals that it is), then Russia may very well need an incentive that is big enough for them to stop its bombing campaign on behalf of a despised regime.

2) Is There a Smoking Gun? If U.S. intelligence picks up credible information that demonstrates clearly and without any equivocation that Russian pilots are deliberately targeting moderate opposition groups fighting the Islamic State or Bashar al-Assad, then the U.S. should present this evidence straight to the Russians. If Moscow denies that something nefarious is going on or claims that the information is a forgery, Washington should take the next step and deliver this intelligence to the U.N. Security Council, the U.N. General Assembly, and the Independent Commission of Inquiry currently investigating war crimes inside Syria.

3) If Russia Continues Bombing, What Happens Next? This is the $64,000 question that the U.S. Government has not been able to answer with great satisfaction. And it isn't at all clear whether the United States could do anything beyond sparking a Third World War that would get the Russians to stop their targeting and redeploy their aircraft back home. Confronting Russian planes in the air is far too dangerous and provocative; sending more weapons and ammunition to rebel units opposed to the Assad regime could backfire if those very same units decide to work with more extremist elements of the opposition; and doing nothing would be interpreted by Putin as another American capitulation in a conflict that President Obama originally didn't want anything to do with.

4) What Does This Mean For Assad? It's hard not to imagine Assad sitting in his presidential palace, looking out of the building's big windows and watching the suburbs get pounded as he thinks to himself that he just dodged another bullet. At every point in the conflict where it looks as if his regime is contracting or is in desperate condition (think July 2012, January 2013, September 2013, May-July 2015), Assad's friends and allies have rode into the rescue by pouring more resources into Syria in order to ensure that he remains at the top of the political system. Russia's campaign of air strikes this week is just the latest and most obvious manifestation of this trend: when Assad is close to certain death or exile or if his regime is at risk of collapsing, Moscow and Tehran provide a lifeline to keep the Syrian Government's oxygen tank on. With this precedent in mind, why would Bashar even consider negotiating a transition government when he is confident that his friends will bail him out?

I would hate to be in the shoes of Obama's team right now.