I was wonderfully undisturbed in my life as a bachelor.

Then I met a five-foot-nothing Swedish-Filipino woman with an authentic spirituality and an uncanny ability to light up a room. She was alluring. And after deciding I'd rather not live without her, I asked if I could put a ring on her finger -- that is, I decided to officially invite another human to be in my personal space for the rest of my life.

We married in a barn.

It only took me a couple months to realize I had no idea how to be married, and that if I wasn't a quick learner, I would risk ending up on the lonely side of the growing divorce statistic.

In America, most conversations about marriage tend to end with disappointment.

Post-moderns say it's not even necessary.

And tragically, statistics seem to say it's not worth it.

Regardless of the good, bad or ugly exposure we've had personally to the institution of marriage, marital disappointment is all around us. It's put on display every day -- in the news, in celebrity relationships, in our friends' and coworkers' lives. And the truth is that even in the healthiest relationships, we will inevitably have moments with our spouse that cause us to entertain this exceedingly popular misunderstanding -- that's the key word here -- that marriage is simply disappointing.

In other words, there is always going to be another reason to divorce these days. However, when looking at the original intentions of marriage and those who have cultivated healthy relationships, there are still plenty of good reasons to stay married.

Here are three that come to mind. 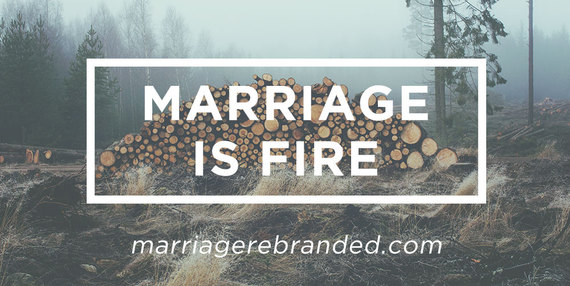 As soon as we're able to understand bedtime stories, Cinderella and her friends tell us love is about happiness. Hollywood eventually takes up Cinderella's campaign, inundating us with the idea that marriage -- and sex -- is our gateway into happily ever after.

While marriage does invite some of the more fulfilling moments in life, it can also be arduous and painful. Yet while most of us -- myself included -- try to turn this friction into another reason to question our marriage, an ancient meaning of love teaches us differently.

Although happiness is often a very real byproduct of a healthy relationship, marriage is designed to pull dysfunction to the surface of our lives, set it on fire and help us grow. The job of marriage is to refine our dysfunction and spur us into progressive wholeness.

When we're willing to see it this way, the points of friction in our relationship quickly become gifts that consistently invite us into a more whole and fulfilling experience of life.

I know the fire of marriage isn't the recipe for a nice relaxing, easy life. I know marriage can be one of the more challenging things we can experience. I know, at times, it can demand far more than we feel ready to give.

I also know marriage multiplies what we can become -- both as individuals and as couples. Marriage, though arduous as times, has brilliant intentions in mind. It's unapologetically interested in chipping away at our dysfunctional thoughts, patterns and postures in life and inviting us -- and our spouses -- to become the best version of ourselves. 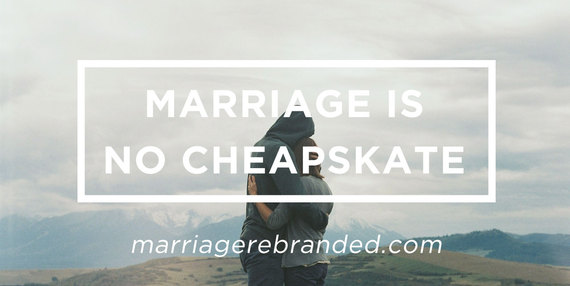 2. Marriage is no cheapskate.

Over the past couple years, I have had an open conversation about the highs and lows of marriage -- specifically how to make the most of the high times and avoid the low ones. Along the way, I happened upon a derailing hypothesis that goes something like this:

If one makes their spouse priority number one, all other areas of life benefit.

It's a disorienting claim. Disorienting, because it refutes my deeper persuasion that success as an entrepreneur, or any professional really, requires career to take the throne of priorities -- and to remain there for, at the very least, a couple of years.

However, after seeing how my recent pattern of caring about work over marriage had produced little more than paying the bills and a miserable wife, I figured it couldn't hurt to give the philosophy a test drive.

For 31 days, I intentionally put my wife first over everything else, then I tracked how it worked. I created a metric for these purposes -- to mark our relationship as priority, and then my effectiveness in all other areas of my life on the same scale, including career productivity and general quality of life.

To my surprise, a month later, I had a chart of data and a handful of ironic experiences to prove that the more you give to marriage, the more it gives back.

Notably, on the days my wife genuinely felt valued, I observed her advocating for me to invest deeply in to my work. She no longer saw our relationship and my career pursuits as competitors for my attention, and as she partnered with me in my career, I experienced the benefits of having the closest person in my life champion me.

Of course, marriage requires sacrifice. And sometimes it will feel as if it takes and takes and never gives back.

However, when we return marriage to its rightful place in our priorities, it can quickly turn from something we have to maintain and sacrifice for into the greatest asset to every other layer of our lives.

In the end, marriage is reciprocal. The more you give to it, the more it gives back (though it may not always give exactly what you want or expect it to give back to you). And the less you give to marriage, the less it gives back. 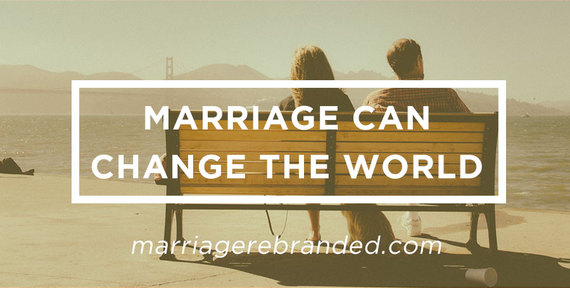 3. Marriage can change the world.

I used to hate weddings. Though I appreciated the excuse to get down on the dance floor and overload my body with sweets, I generally found them to be a big waste of time and money for the couple. It never made any sense to spend what could be the down payment of a new house just to invite a bunch of friends and acquaintances to witness a highly personal pursuit of two people that really isn't anyone else's business anyway.

I've come to discover that this perspective is a misguided one.

John Witte Jr., a renowned legal scholar, blames the era of Enlightenment for making marriage the highly "private endeavor" it is today. He says that, prior to the rise of marriage as a means of personal fulfillment, society largely understood it as a means of good for the greater community. Everyone at the time understood what Barbara Defoe Whitehead argued before Senate just years ago:

"Marriage is more than a private emotional relationship. It is a social good."

Regardless of our modern overlooking of this social good of marriage, what happens in your home does not stay in your home. It has significant implications on your family, community and the world.

Your marriage changes your spouse.

As hard as some of us try, it's challenging to stay the same person after marriage. A spouse is like a mirror, affording us the chance to frequently see and deal with our baggage. However, in the same way, when the closest person in our lives chooses to love us -- despite knowing us -- marriage can also show us a powerful image of who we can become. I like to think of this as a mutual becoming -- the phenomenon that happens when committed love removes a spouse's limitations and helps them reach their highest potential.

Your marriage changes your kids.

Science, on a neurological, behavioral and social level, suggests that a stable family built on a healthy marriage can make quite an impact on a child's development at every stage of life. So much so that, when approached for the silver bullet of parenting, John Medina -- the author of Brain Rules and a molecular biologist devoted to family health -- says, "The most important thing parents can do for their kids is to go home and love their spouse."

Various statistics and studies go on to prove that staying married has implications on the fabric of society, the economy, and the future of our world. But in the end, the point is that marriage has a higher goal than to make two people happy or even whole.

Yes, the investment we make into our marriage can pay dividends for us. But just as importantly, the same investment also has a significant impact on our family, our community and eventually our world.

Our modern world doesn't need any more millionaires or leaders or pastors or soldiers or philanthropists -- not primarily, anyway. What the world needs are better lovers -- husbands and wives committed to learning the unnatural art of loving another person.

So men and women, the next time you find yourself dreaming about career success, or an epic life adventure, or becoming better parents, or any other way you might dream of living a life of meaning, do the world a favor.

Go home and love your spouse. Because though this art of loving another may be unnatural, it just might change the world.

Disclaimer: This article holds no value statement on divorce -- as to whether it's good or bad, right or wrong. Every relationship comes with its own set of variables that effect how healthy of an option divorce may be. The hope for these words is to simply uncover a bit more of marriage's value. 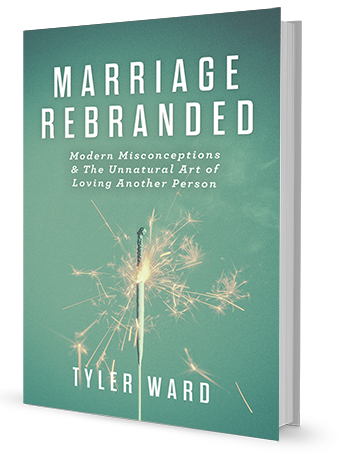 Tyler Ward recently released "Marriage Rebranded: Modern Misconceptions & the Unnatural Art of Loving Another Person," where he explores more modern myths about marriage, tells awkward stories, and offers unorthodox best practices that are sure to help anyone write a better marital narrative for themselves. Order it now. Or watch the book trailer here.
Go To Homepage