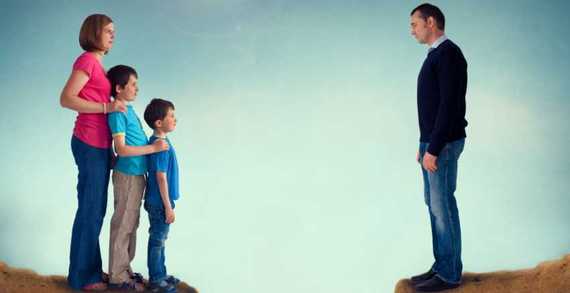 Let's get one thing straight right off the top...

If one of you wants a divorce, you are both getting a divorce. You don't need your husband or wife to give you permission to divorce them.

But how you proceed and how difficult you make it on yourself and your children is up to both of you.

Now, we're guessing you already know that you can get a divorce if you really want to. But you're smart enough to recognize that if you force the issue, things may take a turn for the worse.

The way your divorce kicks-off will set the tone for the rest of how the divorce unfolds as well as the future of your relationship as co-parents.

Certainly you are well within your rights to file with the courts and serve your reluctant spouse with divorce papers. That's certainly one way to get things moving forward.

But if you have children and don't want things to turn ugly, going in that direction may not be your best bet. Backing your reluctant husband or wife into a corner can set off a firestorm from which neither you nor your children will ever recover.

So what can you do if you don't want to burn things to the ground but simply can't stay stuck in limbo any longer?

If you've taken the time to get educated on all of the various ways to get a divorce, you probably learned that there are more peaceful and child-focused options available.

But since they require your spouse's cooperation, you'll need to convince them to willingly participate and come to terms with your decision to divorce.

First you'll need to understand why they are reluctant to divorce in the first place. Then, you'll need to counter their objections so they will agree to move forward towards peacefully ending the marriage.

Here are 4 common objections to divorce a spouse can have and some strategies for overcoming them:

Objection #1: "It's better to stay together for the kids."

Some spouses believe it's important to stay together for the kids - at any cost. They believe divorce causes long-term damage to children. But in reality, it's not divorce itself that has the greatest long-term impact on kids - it's the level of conflict between the parents that is the source of most damage to children emotionally and psychologically.

When asked if a couple should stay together for the children, Dr. Anne Malec, licensed marriage and family therapist, shared these insights,

"Kids do best in home environments that are loving, respectful, and supportive. A healthy home-life means one where open conflict and hostility are limited. If a couple is engaged in a marriage where insults, harmful criticism, and resentment are present, the kids will take note of this, and will be affected by it. It's not a healthy environment for the parents or the kids."

We've worked with many clients who were not great together as spouses but were terrific as co-parents. But only after they both recognized the marriage was over and got a divorce. Instead of spending their time fighting with each other, they were able to focus their attention on raising happy and well-adjusted children.

Divorce is hard in the short run but in the long run, children have been shown to have no lasting effects from it provided their parents handled their split maturely and had a child-focused divorce. So if there's a lot of conflict and hostility in your marriage, the argument about staying together for the kids may not make sense.

If your spouse truly loves their kids, explain to them that you want to keep things peaceful and put the needs of the children first by continuing to be great parents to them post-divorce but you no longer wish to remain married.

That's what's better for the kids.

Objection #2: "It's cheaper to stay together."

Some spouses are very practical and their reluctance to divorce comes from believing that it's cheaper to stay together.

While it's true that two households are more expensive to run than one, people living apart tend to be more aware of their finances and conscientious of their spending.

We ask our clients to prepare a budget of what their spending looks like as a married couple and what they think it will look like post-divorce. After reviewing those budgets, we find that on a surprising number of occasions, the post-marital expenses add up to the same or less than that of their marital expenses, while the spending on their children remains flat.

But besides the couple's household spending, there's an even more important hidden cost buried in this objection and that's the cost of an adversarial divorce. Unless your spouse is willing to cooperate so you can use a more peaceful and cost-effective divorce method, your remaining option will be adversarial and expensive.

So the very problem your spouse wants to avoid - spending a lot of money - will happen anyway if they are reluctant to divorce. A bitter irony, indeed.

Tell your reluctant spouse that having a peaceful divorce now is far less expensive than having an adversarial divorce later. Tell them to not to let their resistance to divorce put them (and the kids and you) in a financial hole you will all have a hard time digging out of.

Objection #3: "If we just work on things a little longer - it will get better."

It's unlikely an individual wakes up one day and out of the blue, decides they want a divorce. Divorce is rarely a snap decision for the spouse who is initiating it. They have more likely been thinking about this decision for a very long time. One couple we met with recently came to us after spending seven years trying to work on their marriage. Seven years!

When a marriage reaches the point where one spouse is absolutely certain about wanting to end it, no amount of time is going to change their mind.

But to the spouse who is on the receiving end of this news, it can come as quite a shock, even if they know that things in the marriage have broken down. They haven't had the same benefit of time and contemplation as the spouse driving the decision.

It's now up to you to let your spouse know that you've given this a lot of thought and you're sure of your desire to seek a divorce. It's important to be compassionate, but firm, because if you aren't, you might give them false hope that things can get back on track, which won't do either of you any good.

Acknowledge that while they may not have had a choice in the decision to divorce, they can have a say in its outcome. Tell them that you need their help in keeping the process as peaceful as possible for the sake of the kids.

Your husband or wife also needs to hear your reassurance that you're not out to get them - you want them just as active in the kids' lives as they've always been and you want a financial agreement that's fair to both of you and your children.

If your spouse is reluctant to divorce for any of the reasons described above, consider our tips to counter their objections, help them come to terms with your decision and work with you to peacefully end the marriage - for the sake of everyone involved, especially your children.