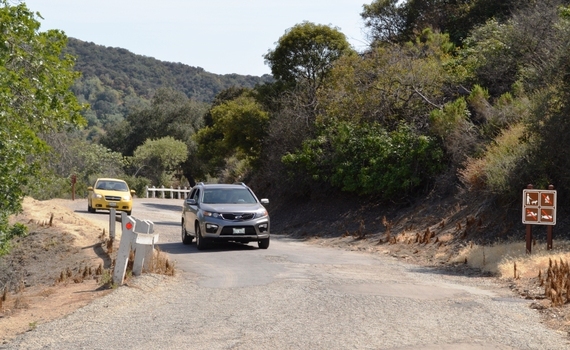 I was waving my arms and jumping up and down like a game show contestant, shrieking "I'm right here!" into my cell phone. On the other end was a friend, driving up to my workplace to pick me up for lunch. He was a block away. Through the windshield, I could see he was fixated on his GPS. "It says I should go left," he protested. No, I said, look up and you'll see me. He saw me... and still turned left.

It's been said that automation makes us stupid. As great as Waze and Google Maps' Traffic are, their algorithms are prone to blind spots. Sometimes the best shortcuts are off the grid. Below I've identified three essential shortcuts that don't come up on navigation apps but shave an average of nine minutes off peak rush-hour commutes around Los Angeles. As an added bonus, all three traverse bucolic settings, providing a Zen-like detour for your brain as well.

Name: Elysian Fields of Auto-Dreams
Use It For: Bypassing the I-5 and 110 interchange
Time Saved: 9 minutes between the Eastside and Downtown L.A.
Note: During baseball season, avoid this route when the Dodgers are at home, unless you want to share the road with 50,000 other people

This bypass is particularly useful in the morning heading south on I-5, when both it and the 110 are backed up all the way to DTLA. Bail the 5 at Los Feliz Boulevard West. Get into the left lane for Riverside Drive. Coast down Riverside at a brisk 45 mph clip as it parallels the freeway, blowing past the poor suckers trapped in stop-and-go traffic. By the time you turn right at Stadium Way 2.2 miles later, it only gets better. Dodger fans will recognize this route from going to ballgames. But because it's 8 am, you own the road. Cars reach freeway level speeds along its six lanes. Open your sunroof and breathe in the earthy smells of Elysian Canyon chaparral. Much better than diesel fumes. After 1.3 miles, make a sharp right onto Academy Road, then a quick left onto Stadium Way again. Cruise through the century-old trees that line Avenue of the Palms. Pass the sleepy bungalows of the Barlow Respiratory Hospital. Turn right onto Elysian Park Avenue, which spits you onto Sunset Boulevard. Go left and rejoin the 110 Freeway just a mile later on the northern edge of Downtown.

Name: Griffith's Ace in the Hole
Use It For: Bypassing the I-134 and I-5 interchange
Time Saved: 8 minutes between the Valley and the Eastside

This shortcut is equally effective for A.M. and P.M. rush hours. In the evening, one can always count on hitting congestion on the Ventura Freeway East, right around Buena Vista Street. Traffic crawls along for the next 2.3 miles to the I-5 interchange before continuing its slog southward. Hit the eject button at Forest Lawn Drive, heading west. Turn left at the first traffic light onto Zoo Drive. One block later, turn right onto Griffith Park Drive. This three-mile drive through the heart of the nation's largest municipal park is one of the most picturesque in Los Angeles. Verdant lawns and trees glide past your open windows, along with horseback riders, the backside of the L.A. Zoo, and the occasional skulking coyote. I have a friend who decompresses so much on this side trip, he often drops in at the Wilson/Harding Golf Course to hit the driving range and enjoy a beer (ignoring the irony that he now finds himself coming home even later). Griffith Park is like that; it invites you to linger. Next, turn right on Crystal Springs Drive. Continue another 1.5 miles to Los Feliz Boulevard, at which point you can either go east, south, or west on surface streets to get to your destination.

Name: To Be Perfectly Franklin
Use It For: Bypassing Coldwater Canyon Drive, south of Mulholland Drive
Time Saved: 10 minutes between the Valley and Beverly Hills
Note: Franklin Canyon Drive is open from Sunrise to 7 P.M. After 7 P.M., a gate closes off access.

Most people know Franklin Canyon Drive as the street that takes you to Upper Franklin Canyon Lake, a popular picnic and hiking spot just down the street from the TreePeople. But unless you're a local, you'd never know that Franklin Canyon Drive continues all the way to Beverly Hills, and Google Maps won't even let you chart a route on it if you tried. The next time you're taking Coldwater Canyon over the hill during morning rush hour, turn right onto Franklin Canyon at Mulholland. The two-lane country road plunges into a cool, narrow slot through the Santa Monica Mountains. Quail and rabbits boldly dart across the blacktop as red-tail hawks keep a watchful eye overhead. Cruise through Franklin Canyon Park, admiring the same lakeside redwoods that Andy and Opie strolled through in the opening of The Andy Griffith Show. Look to the left, by the cattails! Is that an egret or a heron? Does it even matter? After passing over the earthen dam, turn right. Bear right at the fork at 1.3 miles, staying on Franklin Canyon. Re-enter a residential neighborhood. Another 1.3 miles later, Franklin Canyon Drive runs right into North Beverly Drive, which takes you all the way down to Sunset Boulevard. Reverse course in the early evening to avoid P.M. traffic.

Now that you're in the know, I know what you're thinking: How can I repay you? By keeping these secret routes between us. Once Waze users get hip to them, we'll lose the last remaining shreds of L.A.'s secret, countrified byways... and with it, our own sanity.