Many assume the most difficult part about going vegan is giving up mom's holiday ham or that midnight slice of cheesy pizza. In actuality, many of the biggest tribulations the lifestyle serves up have nothing to do with diet. They are social.

When a new acquaintance finds out you're vegan, their response may range from horror to intrigue to "oh, you mean like Beyonce?" From first-date fails to seriously awkward summer barbecues, being vegan in a non-vegan social circle can often make you feel incredibly inept, mainly when food is involved. While veganism is about way more than just your dietary habits, it's your way of eating that will surface as the more apparent difference between you and your non-vegan friends, family and potential romantic interests. Below are three social challenges that veganism may throw at you.

1. When dating. Food is an important aspect of your romantic relationships. Don't believe me? How often are dates centered around food? You eat at least three times a day, and when you're sharing your days with a significant other, misaligning diets are going to be an issue eventually.

My freshman year of college, just before I made the vegetarian to vegan cross over, I was dating this guy from Jersey who wouldn't eat anything other than tuna salad, nachos and bacon. It was hard enough for us to eat together when I was a vegetarian, so when I told him I was considering making a switch to veganism, his response was blunt: "If you do, I will break up with you." And this was coming from a guy who shared the dietary preferences of my 4-year-old nephew.

On a first date at an Indian restaurant, I told my omni-date I was vegan and his response was "oh, cool, I don't eat dairy cause I have wicked IBS." Same thing, kind of?

In an ideal world, most vegans would date other vegans. Together, we can joyously massage our kale salads, have sex with cruelty-free condoms and connect over our love of animals and the planet. However, like choosing a movie to watch on Netflix instant, meeting a vegan you want to date is much easier said than done. I've been vegan my entire adult life and have never dated another vegan. Finding someone you click with is hard enough before you add veganism into the equation.

So, since most vegans are not dating other vegans, we're off dating omnivores, and things can get tricky. Cooking together can be a challenge. Eating out can also be an issue if you don't live in one of the vegan metropolises like LA and NYC.

Then there's cohabitation, which is a whole different animal. A split vegan/omni household comes with rules and regulations that will vary from relationship to relationship and depend on a willingness to compromise. Personally, I won't cook meat, and I don't like it in the house, but my current live-in boyfriend has his own "egg pan" that he uses for his morning breakfast sandwiches.

2. When being introduced to people. A weird thing happens when you're vegan and most of your friends are not. You become "the vegan." It seems strange to introduce a friend by a single characteristic -- "the cosplay enthusiast" or "the lactose-intolerant one" -- yet when you're a vegan, steel yourself for being introduced as so. This extends beyond your tight-knit social circle. Several years ago, a co-worker introduced a new hire to me by saying "this is Zoë... she's vegan." Not "this is Zoë, she has been here for three years," or "this is Zoë, she's part of our editorial team." It's as if, suddenly, veganism is the only interesting thing about me. The vegan label is a rough one to shake.

3. At parties, barbecues, potlucks, and basically anywhere food is being served. Food-related social events are often painful if you're the sole vegan. Of course you come armed with your own dish -- it's not the eating that's awkward, it's interacting with everyone else.

As a vegan at a food-centric social event (which here in America means every social event), you will be bombarded with questions and comments about what you are or aren't eating. Your plate will suddenly become an open invitation for scrutiny. Strangely, many people will take your dietary choice as a judgement on their own, and a litany of rude comments may follow. If the comments aren't rude, then they will be made in jest: "gee, you must really like salad," or "good, more steak for me, har har!" When my omni boyfriend and I go to social events, I have come to expect the "give that boy some meat!" comments as family member and friends pile extra servings of turkey onto his plate and serve me a hefty side of stink eye.

Despite the best efforts of Oprah and Kimye, we are still living in a non-vegan world, which creates an interesting array of issues. Giving up cheese was easy. Telling people about it was hard. 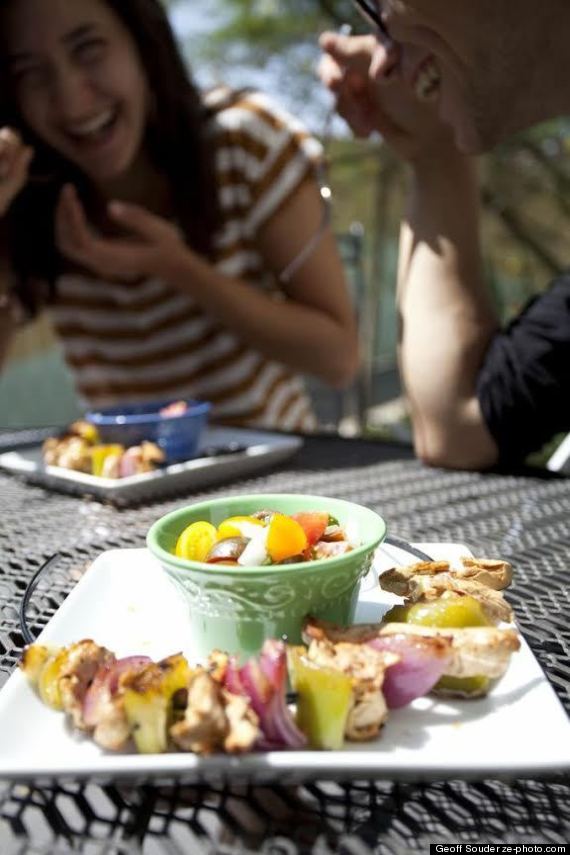