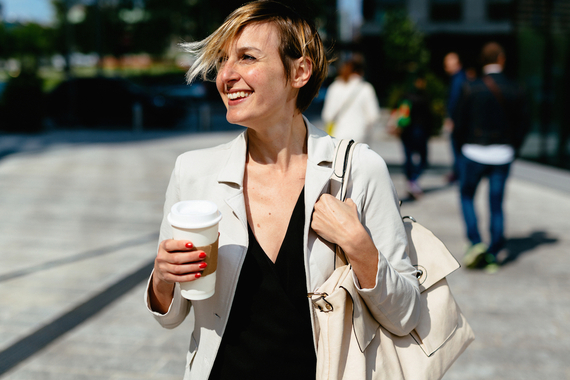 You probably dread your frustrating nightmare of a commute. Whether you're inching your car along in heavy traffic or packed into a train, it doesn't take long for stress levels to rise. Research shows just how unpleasant and stressful people find commuting. In a 2004 study, over 900 employed women were asked how much they enjoyed sixteen different daily activities. Having sex was the most enjoyable, followed by socializing after work. Commuting was the least satisfying activity of all--below housework and working--and made the women surveyed feel impatient and tired.

Commuting is really hard on your health, too. Long commutes dramatically lower life satisfaction and lead to increased anxiety and depression. Studies show that people who commute for more than 30 minutes have higher anxiety than people with shorter hops to the office. A study of suburban rail commuters who took the train to Manhattan, New York, found that the greater the duration of the commute, the higher their actual (cortisol elevation) and reported stress levels. Longer commutes can also lead to higher fatigue, insomnia, cholesterol, and blood pressure.

So, you may be dreading your commute, and it also may be adversely affecting your health. But, aside from the potential to work from home, it has to be done.

So why aren't you waking up earlier to walk or bike to work? Because your commute is a habit.

But it's possible to replace your commute with a new, healthier habit. And, if you aren't able to change your commute, we'll teach you how to make it a better experience.

Habits are something that you build. Think back to when you moved into your current house or apartment, or got a new job. You likely researched transportation options, and maybe even tried more than one route or travel method your first week. But now, it may feel nearly impossible to switch up your trip. It's because with a constant situation and repetition, habits can develop. For example, a regular commuter may be traveling from home to the office around 8 a.m. and back around 6 p.m. (constant situation) five days a week (repetition). After time, you don't even think about how you're getting to work. It becomes automatic--habitual--to grab your keys or bus pass and walk out the door.

When you're doing something that isn't a habit, your brain's prefrontal cortex helps you make a conscious decision about your action. Over time, as you repeat the action or behavior, another part of your brain--the basal ganglia-- actually takes on managing the action, and it becomes more automatic and requires less conscious effort.

If you're feeling tired, irritable, or anxious on or after your commute, it's time to build a new, more pleasant travel habit. Here are better ways to get to work and how to make them stick.

Seriously, it could be that easy. The unpredictability of driving and public transportation--and resulting lack of control--causes commuters the most stress. Hitting traffic or being stuck underground on the subway creates a time crunch, causing commuters to worry about missing their 9 a.m. meeting with their boss or client. So leave your house 15 minutes earlier. Even if you still have to sit in traffic, you'll be considerably less stressed if you don't feel pressured by time.

Create a practical plan to make your new habit--leaving earlier--more likely. Try including tactical ideas like packing your lunch and laying out your clothes the night before.

Try a more physical way to get to work

Focus your new ideas on physical ways to get to work: biking, walking, skateboarding, scootering--either some or the whole way. A 2014 study found that people who biked or walked to work were less stressed, had an easier time concentrating, and were able to enjoy daily activities more than people who drove or took public transportation. As expected, the longer the car commute, the worse people's wellbeing scores. Interestingly, the opposite was true for walkers--people feel better when they have a longer walk to work.

To get your new habit to stick, set a specific, realistic goal for biking or walking to work a few days a week. When you meet your goal, make sure to reinforce your new habit right away.

A reinforcer can be a small reward like brewing your favorite tea once you get to work. It can also be a no-cost, non-edible reinforcer like tracking your progress toward your goal on a visible chart (yes, even marking those "Xs" on the calendar count as reinforcement). By rewarding yourself right away, it helps cement your new habit because you are training your brain to associate this new behavior with a positive feeling. The reinforcer prompts your brain to release the neurotransmitter dopamine (the neurotransmitter associated with reward). As your habit develops you lose the need for the reinforcer because the habit itself becomes reinforcing. In psychology speak, this is called "conditioning", also known as habit change.

After reading about how stressful and bad for your health commuting is, you may be surprised to learn that the time you spend commuting can actually be time well spent. In fact, many commuters reported that they value the transition time between their workday and home life, as it makes it easier to maintain a separation between the two. If you can use your drive to help you leave work issues behind, you may be more relaxed when you arrive home. Listening to podcasts, music, or reading could help you disconnect from work. The biggest key to making your commute emotionally beneficial? Changing your attitude and reinforcing positive habits.

You may not be able to change your commute. You could be constrained by physical injuries, your city's public transportation options, or responsibilities like picking your kids up from school. If you can't change how you get to work, and can't make your commute into a positive thing, you have another option: radical acceptance. Radical acceptance is when you fully accept a difficult situation in your life that you cannot change.

Making peace with your commute means recognizing the situation as a reality and accepting it exists in the present moment--no longer fighting your negative feelings about it. By accepting (not endorsing) your commute, you'll have less intense reactions to stress triggers and will separate yourself from your negative thoughts about commuting.

Everyone needs a different amount of time to form a habit. But everyone is capable, with some planning and consistent practice, of building a new habit. If you'd like to further reduce your anxiety during your commute or other areas of your life, try a free 7-day trial of Lantern here.

8 Ways To De-Stress In 1 Minute Or Less
More:
healthy livingacceptanceHealthStresshabits
Newsletter Sign Up
An essential daily guide to achieving the good life
Subscribe to our lifestyle email.
Successfully Subscribed!
Realness delivered to your inbox