It takes a lot of balls to do what this guy did. Three, to be exact.

An 18-year-old with three testicles recently showed the Internet his jewels on Reddit and answered all of our bulging questions. You know, important questions. Like which testicle is his favorite (the right one) and what he calls them (Alvin, Simon, Theodore).

And no, he doesn't know the man with two penises.

Reddit user GardenofGandalf has a condition called Polyorchidism, meaning he was born with extra treasure. It's a rare condition that currently affects fewer than 200 people, according to the American Urological Association.

GardenofGandalf said he recently turned 18 and could finally show the world his extra testicle. We've compiled the best questions and answers below. But first, the big reveal.

WARNING: You're about to see testicles. It's very NSFW. 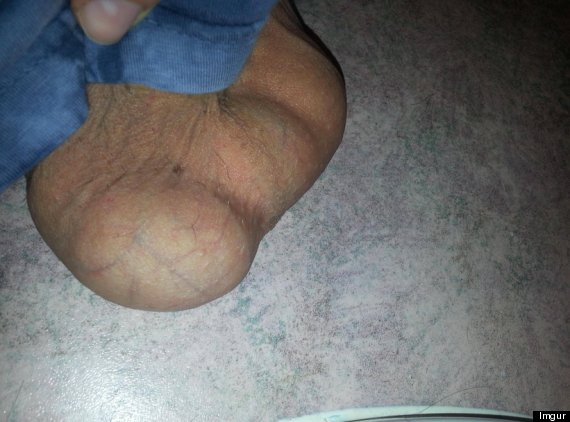 jstarfox: How does it feel to know that you ball harder than any motherf**ker on the planet?

GardenofGandalf: Theres a few of us, we should form a league!

IAmTheTrueWalruss: Do you have a nickname for the almighty tri-sack? The trinity? Three musketeers? Threes-a-company?

GardenofGandalf: The trinity is my favorite so far

sunnsidemeg: Are you type A (all three testicles fully functional, connected to a vas deferencs) or type B (no connection to vas deferens)? What's a typical reaction from a partner? from doctors or nurses?

GardenofGandalf: I wanna say type B, but I'm not really sure. I've had the same doctor forever, and he's known for a long time, so there isnt much a reaction. No friends or partners even know.

Tarron: why did you want to show your genitals onto a random forum like reddit? You said in your first post "Finally I turned 18" or something like this. Which showed a general excitement. Was you excited to show your private parts out? I know it's funny, but were you in general excited?

GardenofGandalf: Ahaha I just know reddit would go crazy over my balls!

onlyincontext: Three is my lucky number. Did that factor into your ball count?

unanything: How do you not get testicular torsion?

beajosie: Do you have an extra-high sperm count??