Last week, the refugee crisis moved from my newsfeeds to my feelings in a deeply personal way.

I had the opportunity to spend a day with a group of refugees in Yerevan, Armenia and talk about our families and futures, and it changed so much about how I view the crisis.

This was not the first time I had been in direct contact with refugees, relief efforts, or the complicated ecosystem of issues that surround them. I've been working in the field of international development for years, and one of my current missions is to help tell the story of United Nations efforts around the world, including its response to the approximately 60 million people displaced from their homes.

But something was different during this encounter. And that's because of Ani Balkhian, who directs the efforts of the Aleppo Compatriotic Charitable Organization (ACCO) to help Syrian refugees in Yerevan.

Thousands of people count on her organization every day to make their existence far away from home as humane and dignified as possible. And that is not always easy.

The UN estimates that there are over 16,000 Syrians living in Armenia today as a result of the ongoing conflict. But Ani and the relief efforts that she manages have had contact with at least this many people to date, so she and others fear that the number may be greater. She told me in ACCO's humble offices, "It is not safe to be an Armenian in Aleppo. Of course they are here now. This choice was made by the situation as much as by them."

It was a difficult choice for Zovik, the first woman I met during our day of meetings. She wears the unenviable title of being the "mother of the first victim" of the bombings in 2013 in her hometown of Aleppo.

When I first heard about her situation, as recounted by her and a representative of Human Rights Watch, I had to ask them to repeat it. At first I thought it was my rusty Armenian. She nodded calmly to confirm. She had lost a child and her home and was now in a city that was doing its best to welcome her. Since 2013, everything changed for Zovik. The fighting and flight divided her family as they fled bloodshed. It was hard to imagine the horror that this woman had undergone. But there she stood, in front of me, while the story unfolded. 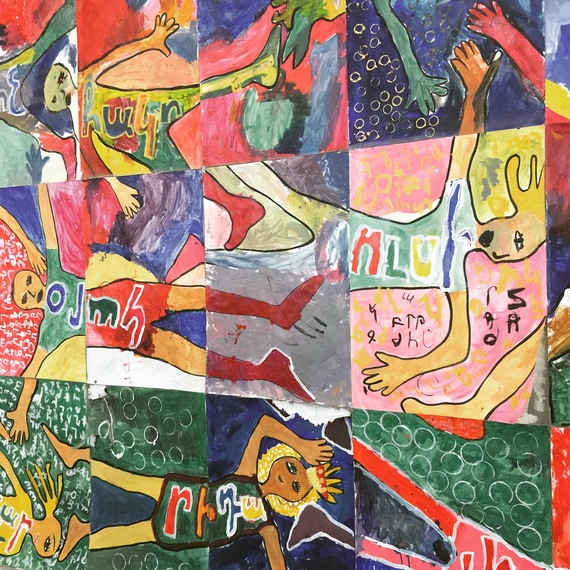 Pictures drawn by Syrian children who escaped from Aleppo

Everyone I met acknowledged that the international community is doing what they can to make this new urban reality a livable one. The UN, USAID, relief agencies, the Armenian government, churches, and diaspora NGOs are doing what they can to aid them. But the aid that is available falls short when a refugee situation in an urban setting like Yerevan is the new "refugee reality."

These women and men had left an urban existence in a once vibrant and bustling city of Aleppo for a country that granted many of them residency - and some of them citizenship. But an ironic thing occurs for many of these people once they arrive in a place that gives them a legal existence -- the attention that other refugee hot spots may receive tugs on the resources available for them.

"They need rent and jobs and training and help that is not as obvious as a feeding program," an international aid worker told me while in Yerevan. "There are programs to help but they could last as little as three months," the aid worker continued. That is not enough time to get on your feet for someone whose world has just been turned upside down.

I learned three important lessons during my day with the Syrian refugee community in Yerevan. As embarrassed as I am to admit it, these are things I should have already known. I am sharing them here because a problem as complex as this requires all of us to share what we learn so that we can drive the kind of attention, advocacy, and awareness that will help refugees get the support they need.

1. The refugee crisis is also an urban one.

The pictures we often see of refugees are from refugee camps. Many of these images often show rural places where UNHCR and other organizations bring much needed aid to refugees. For many, these are ingrained as the mental picture of what constitutes a "refugee situation."

But many of the people who have been forced from their homes are living in cities. And it can be tempting to make assumptions or use vocabulary that doesn't fit the situation. It may not appear that they are in desperate need, but their crisis is just as urgent.

2. They feel every bomb.

Even though many of the refugees I met are now away from the imminent danger of shelling, they are keenly aware that their city remains under siege. The day I met with the people of the Aleppo Center, the news reported that dozens were killed by bombings in Aleppo.

This news tears at each of these men and women who had to flee their homes and are now in Yerevan. While it is a news report for most of the world, for them, it is a harrowing report about their hometown. As one of the women at a center for disabled children told me about the difficulties of her new existence, a friend whispered the news of the bombing to another. As the news trickled through the center, it was a grim reminder of how ongoing developments in Syria impact them.

When you are a Syrian refugee living in a place like Yerevan, your reality is the same as that of the other members of the community. That means that the local economy, the local housing market, food prices, and energy prices are all monthly hurdles. As I learned about the programs in place for these refugees, I was amazed to learn about what a difference aid can make.

Housing is a major problem, even with the local government and other agencies trying to help. It is not a lack of apartments, but how to pay for them, that is the obstacle.

One woman told me that it is not uncommon to find 10 or 12 people living in a one-room apartment because it is so hard to cover rent for so many Syrians. Others were offered the chance to live outside the city but refused since their entire lives had been spent in the urban sprawl of Aleppo, not farm country. The organizations that are working to help provide rent assistance cannot afford cuts when thousands of Syrians are counting on them. Budget cuts to these organizations (whether UN agencies or private aid groups like ACCO or government funds from donors like USAID) are not in anyone's best interest.

I asked detailed questions of the people I met about what they needed most and what assistance is more of a hindrance than help. "Everyone needs something eventually," Ani told me. She, and others, made it clear that funding will help their groups get their jobs done and will help people in ways that are sustainable and can have a long-term impact. That means donations from individuals, from governments, from businesses, and from philanthropic organizations.

My conversations with refugees, and about how to help refugees, will continue in the months and years ahead, and these conversations must continue around the world. We need to enable refugees to rebuild their lives with dignity. It depends on us to move global attention to them, and those who are helping them, so conversations can become reality.

From May 23-24, the United Nations is bringing world leaders together for the first-ever World Humanitarian Summit to advance action to address humanitarian needs. To learn more, visit WorldHumanitarianSummit.org.