Chinese artist Zhang Xiaogang, best known for his "Bloodlines" series of paintings that feature hazy, black-and-white portraits drawn from Mao-era China, may well be his country's hottest painter. But success is not without its price. Though just 54 years old, he is afflicted by ongoing health problems, apparently connected to the stress incurred by being at the white-hot center of the art world's international spotlight. Today, an extensive profile in the Wall Street Journal details how Zhang has suffered two heart attacks in the past year and undergone two heart surgeries. Told to quit the drinking and smoking that he took up to combat shyness and to reduce work stress, the artist has stopped painting completely over the past year, working instead on a new series of bronze sculptures. 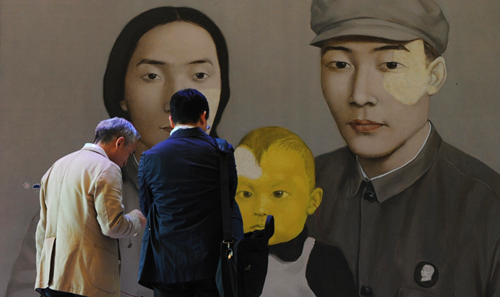 Zhang is at the forefront of the Chinese art market, with auction prices topping out at more than $10 million during the recent Sotheby's Hong Kong auction of the Ullens Collection for an early triptych (according to BASI). He is internationally represented by powerhouse gallery Pace, which runs a grand space in Beijing's 798 art district. His problems say a lot about the contemporary art world, in China and internationally. Below, ARTINFO breaks out three lessons about the Chinese art world gleaned from the WSJ's Zhang profile.

In Part, Zhang's Challenges Are Generational

Zhang's career has been shaped by the tumultuous formative period during which the Chinese contemporary art world and the market for Chinese art first gelled. He moved from illustrating books for small commissions in the '80s to his first $10,000 sale at Christie's in 2001, a decade ago. For much of that time, Zhang oversaw his own career. "China didn't have a single privately run art gallery when Mr. Zhang got his start," the article notes, and the stress of developing a career without that support system doubtless added to Zhang's struggle. By contrast, Chinese artists emerging today have a much stronger network of local and foreign galleries to work with, dealers to depend on, and collectors to sell to.

If You Think His Work Has Become Repetitive, So Does He

Then again, sales and popularity also lead to their own pressures. Zhang seems to feel overly tied to the mega-successful "Bloodlines" series that made his career, continuing to churn out the paintings even after he has moved creatively on to other subjects. Swiss collector Uli Sigg saw "Bloodlines" paintings early on and immediately commissioned one for his dining room. "After those paintings, he was on top," Sigg told the Wall Street Journal. "Suddenly, he was the new face of China." But how do you keep going after that initial success? "I just felt like a machine, forced to work," Zhang said. "I felt like I could not decide things for myself." Even major collectors have noticed the artist's over-reliance on his greatest hits: Collector Budi Tek, a noted collector of the artist, states that Zhang should "slow down on the Bloodlines because they're not as relevant anymore." (The same could be said of fellow Chinese art star Yue Minjun's manically grinning figures.)

His Salvation May Be in China

While Zhang's early success has been defined by foreign collectors, the native Chinese art market is heating up rapidly, and Chinese buyers may have standards and tastes different than those who have supported Zhang in the past. In 2009, the top auction price paid for one of the artist's works ($2.5 million) was paid by an Asian collector, the Wall Street Journal notes. This coincides with an increasing mania for native artifacts and antiquities, with Chinese collectors picking up pieces like a Ming porcelain vase from the 15th century for upwards of $20 million. All this may offer a little hope for the beleaguered megastar. Local buyers may be more understanding of Zhang's new, different work, given the difficulties of overcoming the language and culture barrier. Speaking to his own community, rather than that of an elite selection of international art connoisseurs, could give the artist a fresh start.

Gallerist Denise René, Known as the "Pope of Abstraction" for Championing Op and Kinetic Art, is Dead at 99

A Library for the Birds? A Chinese Architect Seeks the Ultimate Harmony with Nature Outside Beijing

"I Don't Want to Be Bound by Anything": Dayanita Singh Brings Her Cerebral Art to London and Istanbul

"What You Really, Really Want?": Spice Girls to Put Costumes on Auction