Summer is here, which means many people will be heading to Walt Disney World for summer vacation. Disney World is often referred to as the "happiest place on earth," and with Mickey Mouse, Dole Whip, and Space Mountain , it's easy to understand why. However, the happiest place on earth can be full of downright unhappy times for thousands of visitors each summer. Temperatures in the mid-90s, high humidity, and long lines can cause many of us to be less than joyful while we're at one of Disney's many attractions.

My parents took me and my sister to Disney World back in the summer of 1979, and I haven't stopped going since. With annual summer trips to Disney in my childhood and teen years, to multiple trips with my wife and daughter now that we're Florida residents, I have had the opportunity to observe many frustrated, unhappy Disney-goers up close. 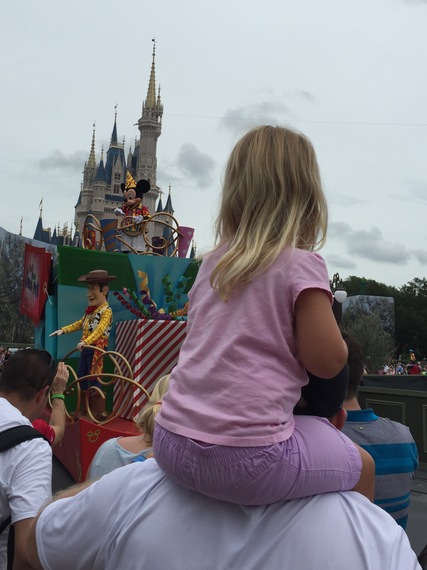 My daughter and I at the Magic Kingdom

Unfortunately, I can't make the weather cooler or the lines shorter for you this summer. But what if I told you that emotional intelligence can help you enjoy your Disney vacation despite the hot weather and long lines?

Emotional intelligence (EI) is our "ability to identify and manage" our emotions and the emotions others are experiencing. Among other benefits, having a high EI can help us make better decisions and be less stressed. While there are various dimensions and sub-dimensions that make up the concept of EI, I want to focus on three EI strategies that can help you enjoy your Disney vacation in the face of those hot temperatures and long lines.

1) Increase your empathy - Empathy is our ability to identify with and understand the perspectives of others. This is best exemplified by the old adage to put yourself in someone else's shoes. For example, last week my family was having lunch at Pecos Bill Cafe at Disney's Magic Kingdom. We were there at noon, the peak rush hour for lunch, and it was crowded. While I was waiting at the service counter for our food, along with another customer, I could tell the cast member (Disney lingo for "employee") preparing our orders was not having a good day. She looked frazzled to say the least. However, the other customer waiting alongside me continually grumbled and verbalized her frustrations with and at the cast member which a) made the cast member even more frazzled and b) led to an increasingly frustrated attitude of the customer. Instead of trying to identify the cast member's emotions and take that into consideration, the customer chose to berate the cast member instead, causing negative emotions in both parties.

Try this: attempt to feel what the other person is feeling and respond accordingly. This can help defuse tension and help the other person slowly transition into a more positive state. In my example, the cast member serving us was not feeling positive emotions. Based on that information, I chose to simply smile at her as she hurriedly paced behind the service counter trying to prepare our meals. So whether it's a cast member, another vacationer, or someone in your own family you're interacting with, try to put yourself in their shoes and understand the emotions they are displaying. This will affect how you respond to them and make a difference in how they respond to you.

2) Increase your flexibility - Dr. Reven Bar-On , one of the foremost authorities on EI, refers to flexibility as being able to "adapt and adjust one's feelings and thinking to new situations." It's very possible that something will not go just as you had planned while on your Disney vacation. During our most recent Disney trip, I really had my heart set on seeing the IllumiNations fireworks show at Epcot. However, Mother Nature saw fit to bring a torrential downpour to central Florida the evening we visited Epcot. I could've become angry and ruined the evening for my family because my plans for the night were thwarted. Instead, we went back to our hotel and played games in the arcade, ate ice cream at the hotel snack bar, and had a blast.

So how do we increase our flexibility? Do this: manage your expectations and the expectations of those travelling with you. Know going into your vacation that something will not go as planned. It will rain...trust me, it rains almost every afternoon during the central Florida summer...which can throw a kink into your plans. An attraction might be closed. The line to meet Anna and Elsa might have a 2-hour wait. By knowing in advance that your schedule might not go as planned, you have opened yourself and others up to the idea of "going with the flow" and trying something else when your original plan falls through. And by going with the flow you are less likely to have your own emotions go into a tailspin when your expectations are not met.

Try this: express your feeling with specific feeling words in a three-word sentence. For example, while standing in line for an hour to ride It's a Small World you may become frustrated and say (or think) "Disney is so dumb!" Do you really feel that Disney is dumb (perhaps you do...and if that's truly how you feel, that's OK)? What if instead you said (or thought) "I feel impatient"? It's OK to feel impatient. And it's even better to know that it is you who is impatient rather than placing the blame on an entire theme park. Doing this gets at the heart of the issue. After all, according to Andrew Shatté, "Thoughts determine emotions."

So next time you're vacationing at the happiest place on earth give these three tips a try. They might not revolutionize your Disney experience, but they will help you be in a better frame of mind and more fully enjoy your trip to Disney.

What do you think? Can emotional intelligence enhance your Disney experience? I'd love to connect on Twitter and hear your thoughts: @ProfessorRWC