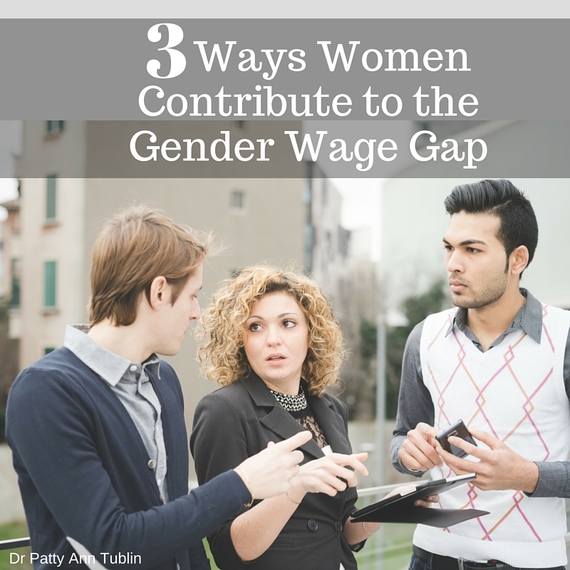 Although there are institutional and cultural realities that play a huge role in the gender wage gap - many women themselves (unfortunately) are part of the problem.

Before the ladies get all up in arms about this factual statement, read the research below that I came across while gathering information for my newest Amazon Best Selling Book: "Money Can Buy You Happiness: Secrets Women Need to Know to Get Paid What They Are Worth!"

According to a recent study by Salary.com, 55 percent of women felt nervous about negotiating their salaries, compared to 39 percent of men. Following are some of the findings women themselves have put forth accounting for this difference.

1. Women often wait to be offered a raise.

The cliché "Opportunities are rarely often, they are seized" could not be truer when it comes to business in general and asking for a raise specifically.

Why do women wait for their well-deserved raise?

Boys are raised with a different set of expectations and messages. Boys are raised - and often rewarded - when they assertively go after what they want. Boys are praised for being aggressive. They are often not ostracized or criticized as girls are when they cut the line in school, speak out of turn before being called on, etc.

This difference in how young boys and girls are raised sheds some light on why women need permission to ask for a raise and men don't. Women have internalized the value of patience and waiting - rather than seizing the moment or opportunity by being aggressive and pro-active.

Waiting for permission to ask for a raise (and many other things women desire) poorly serves women throughout their careers. This makes a huge contribution to the gender wage gap.

2. Women are not confident in their negotiating skills.

This is an interesting sentiment, often expressed by women themselves, because it is simply not true. Women are excellent negotiators - for everyone but themselves.

The dilemma for women when it comes to their own salary negotiation is that women view this discussion as entering a conflict.

Research consistently shows women tend to avoid conflict (especially surrounding themselves) at all cost. Therefore, if you believe your salary negotiation will be fraught with conflict - and you tend to avoid conflict - you will consciously avoid entering into this discussion. Consequently, women pay a very high price for what I refer to as a conflict avoidance mindset.

Women need to re-frame their view around self-negotiation as having a business conversation around money and not about entering into an argument.

3. Women do not believe their work and/or position is worth more money!

Women shy away from salary negotiations, in part due to low self-esteem. According to Christina Bombelli: "They do not feel sufficiently worthy or entitled to ask for something, whether it be a pay raise, a promotion, or even the time and attention of their superior."

Many women tend to undervalue their own work - in ways inconceivable for most men.

According to Forbes.com, "women are less likely to negotiate higher salaries and compensation for ourselves because we tend to have lower expectations than men when it comes to the salaries we believe we deserve."

To close the gender wage gap, it is imperative women remember they have as much responsibility to make money for themselves, as they do for their company.

Click here www.womenandmoneybook.com to order my Amazon Best Selling book: "Money Can Buy You Happiness: Secrets Women Need to Know to Get Paid What They Are Worth!"
#womenandmoney #womenatwork