March 8th, 2015 was International Women's Day. It's the 104th time the day has been celebrated. As women break barriers and crack glass ceilings in countries like the U.S., in much of the developing world, women and girls still face staggering challenges to their health and well-being. This week seems like the right day to recognize three of them.

Child Marriage: Did you know that one in three girls in the developing world marries before she turns 18? Too often these early marriages happen without a girl's consent, depriving her of the chance to finish school and often resulting in her becoming a mother before she is physically and emotionally ready. This can result in birth injuries, such as obstetric fistula, and worse, maternal death. Childbirth is among the leading causes of death among girls 15 - 19.

Obstetric Fistula: This childbirth injury is caused by prolonged obstructed labor, which leaves a young woman or girl incontinent and too often a social outcast. Poverty is at the root of this tragic, but preventable, problem that is most of the time treatable with surgery. There are at least one million women with untreated fistula who are leading lives of depravation, misery and isolation simply for trying to bring a child into the world.

Here's a young woman I met, Goni, at age 15. She was married at 13, quickly became pregnant and delivered a stillborn baby at 14, and developed an obstetric fistula during delivery. 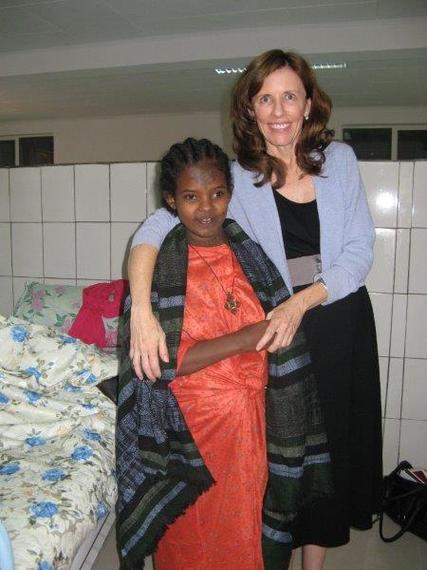 Female Genital Mutilation (FGM) /Female Genital Cutting (FGC): You may have already heard about this practice, where female external genitalia are removed often with a razor or sharp knife, usually without anesthesia or proper medical attention. Though the practice has no medical benefit, it can lead to significant health problems; it is widespread in countries in Africa and Asia. UNICEF estimates over 130 million women and girls have had FGM/FGC performed on their young bodies, the vast majority while they were still girls, under 15 years of age.

Each of these difficult problems - child marriage, obstetric fistula and FGM/FGC have something important in common: they largely impact poor women and girls who too often do not have the power to stop them. But the good news is that there is work being done right now to combat each of them, so that at some point each may be history rather than a heartbreaking reality.

Here are a few quick ideas of things you can do with this information:

Child Marriage: Wikipedia is helpful. Or check out Girls Not Brides, a path-breaking global campaign that is creating a worldwide movement to end child marriage. There's lots of great information on their website. (Full disclosure: Fistula Foundation is one of the 400 groups that are part of their network.)

FGM/FGC: The Wikipedia information provides a good overview. The World Health Organization has information that's helpful, too. Want to be inspired? Read more about two women who I revere: Molly Melching and Edna Adan, both working on opposite sides of the African continent to empower communities to end FGM/FGC. (Full disclosure: Fistula Foundation, where I work, has funded both of these women's work.)

E-mail this post to a thoughtful guy - or gal - you know - a friend, your brother/sister, your dad/mom, your son/daughter, your uncle/aunt. The first step to changing the world for women and girls is creating awareness of what needs to be changed. You can take that simple but important step by sharing this with someone you know.