Dashing through the snow in the watersheds of some of the last old growth forest in Illinois ... are discharges of illegal levels of pollutants, including manganese, total suspended solids, sulfates, iron, and acidic water, thanks to a reckless strip-mining coal operation.

At the Fulton County Health Department in Canton, Illinois today, concerned Illinois citizens from the Sierra Club, Prairie Rivers Network, and the Environmental Law and Policy Center filed a notice of intent to sue Freeman United Coal Mining Company, regarding repeated and excessive violations of the Clean Water Act at their strip mine near Industry.

"According to Freeman Coal's own reports, the Industry mine has broken the law hundreds of times in the last five years, with over sixty violations through August of this year," said Joyce Blumenshine, Heart of Illinois Group Sierra Club. "If every one of those violations were prosecuted to the fullest extent of the law, Freeman Coal would be forced to pay several million dollars in fines. Our goal is to see them comply with the law and operate the mine in a responsible way that is safe for local residents."

The group found that the reckless coal company had over 300 documented exceedances of their NPDES permit since July, 2003.

With less than 16 percent of the state's forests still standing in Illinois, the strip mine is located in an area that was once one of the largest remaining contiguous woodland in western Illinois. Out of the once 5,000 acres of old growth, the Great Chandler Timbers being strip mined are the last forests in the area with ancient maples, oaks, and black walnuts trees, and iron woods, willows and wild cherry and thorn apples.

For local people in the area, the Great Chandler Timbers are also natural heritage sites that need to be protected and used for local benefit; an extraordinary array of endangered birds and wildlife inhabit the woods, including the Indiana Bat, the Alligator Snapping Turtle, and a Great Blue Heron rookery. Here's a shot of the nesting Herons: 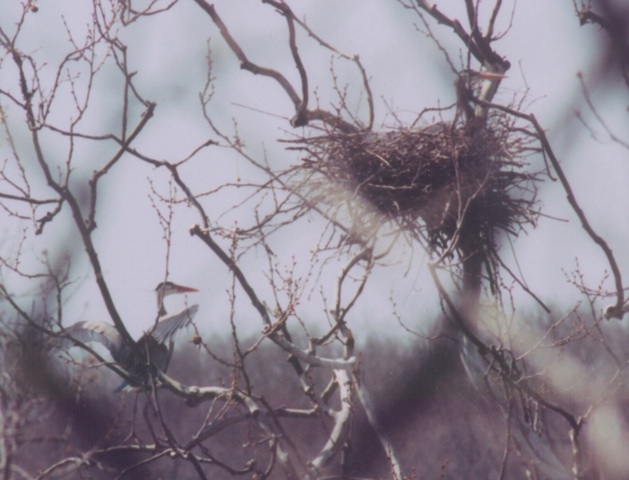 Four years ago, Gov. Pat Quinn launched an online petition to stop the strip mining of areas around Banner, in Fulton County. Quinn declared the Banner Marsh to be a vital habitat for American Bald Eagles, American White Pelicans, Great Blue Herons, ospreys and other wildlife.

Instead of a strip mine, area residents had hoped the Chandler Timbers area could be utilized for a recreational lake, and nature reserve. Unlike the devastation from the strip mine, the fertile farmland on the outskirts could have continued to raise corn, and even serve as as site for an industrial wind farm.

"Our natural heritage of the Grand Chandler Timbers is being erased off the face of the earth in exchange for a two year project of jobs and a small vein of coal," area resident Kimberley Sedgwick testified at an Illinois Department of Natural Resources hearing last spring. "The creek is being subdued from an A stream down to an impaired stream and being re-routed although some of the IDNR specialists have asked to avoid any disturbance. The fish species study clearly shows the reduction in huge numbers throughout the years."

Documentation from the mine shows frequent discharges of waste water with illegal levels of pollutants, including manganese, total suspended solids, sulfates, iron, and acidic water, all in violation of the Clean Water Act and the National Pollutant Discharge Elimination System (NPDES) permit for the mine. Failed reporting and monitoring requirements have also been documented.

Mining waste and discharge from the strip mine, according to state agency surveys, are already contaminating the groundwater and Grindstone Creek, a historic watershed that served the first mills in the region. Sediment ponds and mining waste contain iron, sulfur and toxic minerals. Grindstone Creek runs into Camp Creek, a major site for historic Native American occupation, and then those creeks run into the Lamoine River, a major waterway in the state.

Here's a shot of Grindstone Creek: 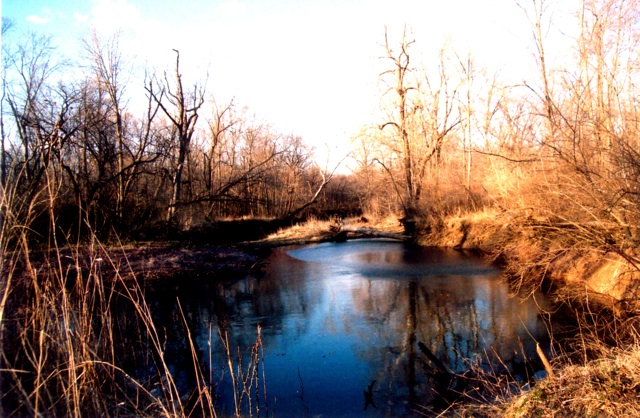 "The pollution being released from the coal mining operation can cause streams to become acidic, killing fish and other stream animals," says Traci Barkley, Water Resources Scientist with Prairie Rivers Network. "Some pollution can even suffocate insects on which fish, birds and wildlife depend. The whole stream can become degraded, not just the stretch where the pollution is occurring." There are concerns that downstream water quality can also be impacted for wildlife or communities that depend on the water. High levels of manganese can cause neurological damage in humans, and has been linked to Parkinson's Disease.

In a similar situation in West Virginia, a recent EPA report found that coal-mining discharges led to the development an exotic algae, wiping out aquatic life -- thousands of fish, mussels, salamanders and others -- in Dunkard Creek.

"All the the good intent and promises of state agencies saying that permits will protect the environment are useless if those permits are not enforced. The length of time these illegal discharges have gone on is particularly troubling," comments Brenda Dilts, Chair, Canton Area Citizens for Environmental Issues. The Canton citizens group has raised repeated concerns about the proposed North Canton coal strip mine, which will have mine water outfalls into a creek feeding Canton Lake, the public water supply for over 20,000 people.