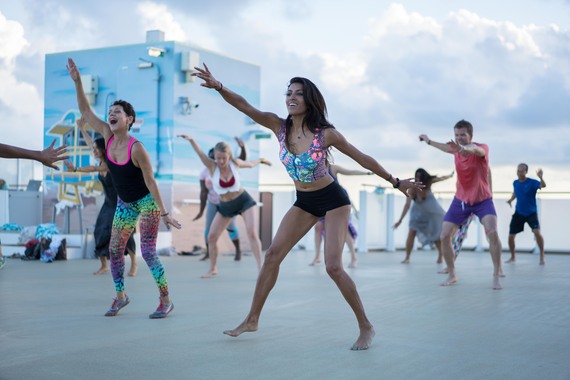 Summit at Sea 2015 was really special and amazing. I enjoyed it and I'm signing up for next year. Lots of inspiring talks, great music, some art, many many great people in a closed offline environment and some weird stuff such as special meditation techniques. Loved it.

Summit at Sea is organized by Summit founded in 2008 by Elliott Bisnow, Brett Leve, Jeff Rosenthal, Jeremy Schwartz, and Ryan Begelman. I know Elliott and Jeff well. The first Summit at Sea took 1000 young entrepreneurs on a ship in 2011. Summit also purchased Powder Mountain and organized many events there. I participated in Summit Outside which was their largest on the Mountain and really enjoyed it too.

There aren't only billionaires and celebrities there, but sure, there is some of that and at times you see some of that but not too much and not only.

Where is it? How is the food and accommodation?

The ship leaves Miami and goes to the Bahamas and back. 2015 was on one of the Norwegian ships which feels like you're in Las Vegas inside. It's very comfortable but the decoration is pretty tacky and slot machines are all around (which very few people from Summit used). The basic cabins are small but comfortable and very quiet. There is a number of touristy themed restaurants such as Le Bistro and Teppanyaki. Everything was included in the registration fee and the food was okay but not amazing. Most restaurants were pre-booked for the whole trip so I always ended up in the huge few restaurants that did not need any reservation and weren't that great but okay. 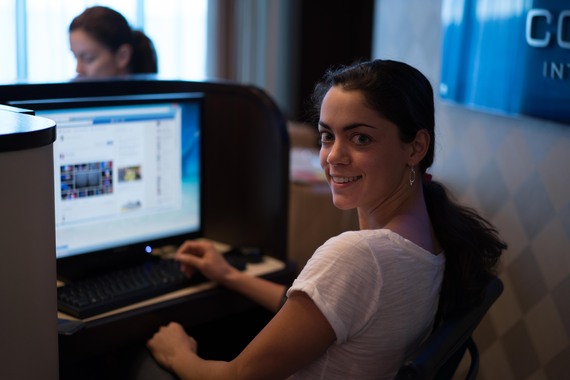 Summit shut down all wifi satellite access on the ship except for 10 computers in the main lobby. It made everyone not look at their phones and computers for three days, which was great. You can't leave the boat either, so everyone is together and there are no side events.

Apart from a speakers dinner the day before, there were no VIP or private events I know of, everyone had the same experience except for those who booked huge suites on the boat and organized private parties there.

Summit is invite only and the crowd is a mix of 25-40 year old entrepreneurs, artists, musicians and people doing interesting projects, mostly Type A leaders or would-be leaders in their field. Yeah I know I'm 43 and felt on the older end there but always felt great. They are mostly American and mostly NY, L.A. and Silicon Valley based. How do you get an invite? You know the founders or get someone to introduce you to the team, or you can apply on their website.

The first Summit at Sea was 1,000 people, this one felt really big with 3,000. The networking was intense and sometimes a little overwhelming with so many "A- types" together I had never heard such a high level of conversation noise but they were good conversations. It's also so big that I felt I could not talk more than a few minutes with most people. A little frustrating but still great. Made a lot of new friends and learned a lot from people who were not in my field, technology.

I would say the spirit of the crowd at Summit is very good. A lot of people who want to help each other, are open to anything and make things happen. There is very little "I need to pitch my shit to her/him" or "how much business can I get done here". Sure thing there is some business happening, but it's low key and no hardselling of any sort.

Sam Tabar has a great post about the spirit of the Summit people.

Gender balance is very good, very unusual for most events, especially in technology.

The speakers line up is still online as I'm writing this. Eric Schmidt and Travis Kalanick had a great opening session as well as Chris Sacca and Edward Snowden (obviously remotely).

I wrote in details about "The Art of the Interview" by Cal Fussman that I really enjoyed. There were an incredible amount of great sessions and talks that sadly many of us missed as we were busy networking somewhere else, as in a hot tub. It's the opposite experience of TED where everyone is in the main room at the same time sharing the moment, Summit feels much more like a small SXSW where there is non stop FOMO because of too much happening at the same time. There are pros and cons for each formula, I wish some of the talks would have been recorded and shared online so I could watch them later, but that's not how Summit does it, it's more like "what happened there stays there", which has its advantages too. 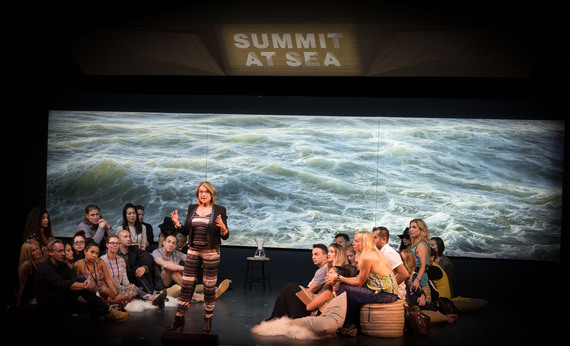 The hit of Summit at Sea was for sure Esther Perel and her talks about love, relationships and hum, a lot of sex (talks). The room was so packed she had multiple sessions. Even some of the ship crew in their white sailor suit interrupted their service and were listening to Esther. It's incredible the "appetite" of the millennials for relationship and sexual practices advice. What to think about an open relationship? Can love last? Is being exclusive for life something of the past? Is masturbation okay? I will stop here, it sometimes went to even more intimate places and it was entertaining for sure. I see a new trend here, there are a number of private events I go to that are mostly about technology but end up having small off the record sessions or conversations about relationships, divorce, breaking-up... benefits of therapy and even... talking about the pros and cons of drugs, which is unrelated.

At most events you go to, evenings can get pretty boring, especially the tech events with 95% men only "parties" which are super sad, and often bad music.

Summit has this "cool enough" and I guess pays enough the bands that you get really top DJs and bands you generally hear more at Robot Heart or Further Future (that I help organizing) such as Bedouin, Scumfrog, Thugf*cker... Great dancing with those guys, or simply watching the sunset from a hot tub.

I was impressed by the line up and cruising back to Miami with the sunrise as we were docking dancing on great music outside on the top deck felt very good and memorable. 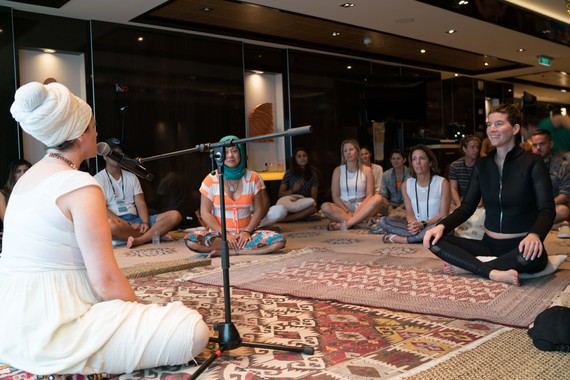 Comedy, film screening, storytelling, high ropes course, Afro-Brazilian dance (which I took, no photos of me doing that sorry!)

...lettering workshop, make your own chocolate, history of mushrooms from ancient mystics to modern medicine, there were too many edgy, weird, surprising sessions to count.

I went to a pretty weird one. It started with the speaker's name "Guru Jagat" who doesn't really dress like you and me but who cares. We did very weird (for me) meditation practice based on very deep (and noisy) breathing in group, expressing your body as if you were really upset then repeating a mantra saying "SA_TA_NA_MA" non stop for 11 minutes touching with your thumb a different finger of your hand at each SA or TA.

Are you still with me? Honestly I would rather that this stayed off the record as we as a group looked like total weirdos moving with weird body moves and chanting crazy stuff oh and breathing loudly. That was definitely super weird and special but I have to admit I felt good after. I won't continue though, I prefer my calm silent vippasana form of meditation. I'm curious though as it made me feel really good. According to Guru Jagat you can put your brain in the very same states as when you take different types of drugs (I don't do any) just with meditation practice as the substances drugs help release are already in your brain. Interesting. If she had a practice in San Francisco I would definitely give it a try a few sessions.

There were waterslides on the ship, the kind that kids love. They were great, yes, especially with a few beers.

This is annoying in many events who either put sponsors delivering commercial talks on stage or too much branding around. None of that at Summit, quite the contrary, if there is a whiskey degustation session sponsored by a brand (Dewar's in this case) it's also a great experience to learn how to make a Scotch based cocktail. 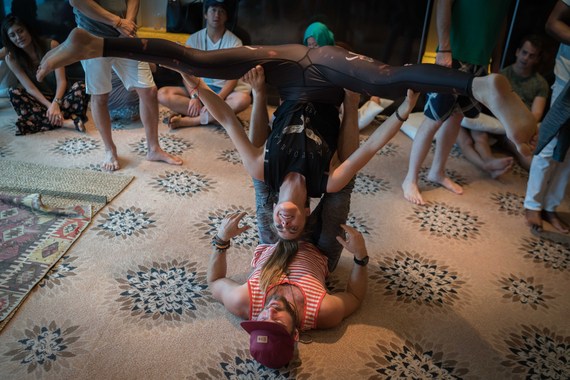 How could it be better?

Not much to say, better food? Sure, always! Smaller? You can go to their Mountain event week-ends for that, they're small and interesting.

With the number of influential people and leaders in the Summit community there could more action to improve the World, Summit could be used to tackle major problems and evolve from a little hedonistic to a platform.

All my Summit at Sea photos are here.