The last 12 months were a watershed for domestic violence. Famous athletes faced real scrutiny for the acts of violence they committed, survivors took control of the conversation with a viral hashtag, purple nails expanded the dialogue nationwide, and there were also incredible advocacy wins.

This October, for National Domestic Violence Awareness Month let’s look back at the many newsworthy and heart-wrenching domestic violence moments from this past year that informed, enraged, and inspired us all to bring greater awareness to this issue.

1. The horrific video of domestic violence seen around the world.

TMZ released shocking footage of NFL star Ray Rice punching his then-fiancé Janay Palmer and knocking her out. As a result, the NFL faced harsh criticism for how they responded and the issue of domestic violence was thrust into a national spotlight.

2. Then came the hashtag that went viral: #WhyIStayed 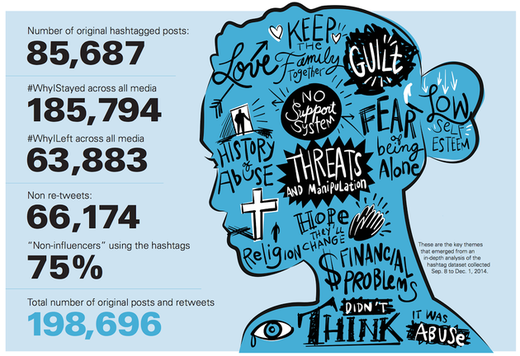 Domestic violence survivor Beverly Gooden took to Twitter to address what she considered were "very victim-blaming” comments towards Janay Rice. And she struck a chord with many survivors who shared their own very real reasons for staying in an abusive relationship. There were nearly 600,000 people explaining just why a victim might stay.

After strong advocacy efforts from service providers, New York City launches a new program, LINC III, in the Fall of 2014 to move families from emergency shelter into their own apartments. With housing options limited for survivors, this was a much needed win.

“I’d like to order a pizza for delivery.” A dispatcher quickly realizes that the caller is not ordering pizza but actually needs protection in her own home from an abuser who is still there. NO MORE created this unforgettable ad and the NFL donated the air time.

Safe Horizon’s #PutTheNailinIt campaign reinforces a simple message – it’s time to end domestic violence. To launch the campaign, Miss America 2015 Kira Kazantsev, a survivor herself, took to the streets of NYC to encourage New Yorkers to take a stand against domestic violence. Since its launch, that campaign has reached more than 15 million unique viewers.

Domestic violence is a key driver of homelessness in New York City, especially among women and children. This new initiative will increase shelter capacity by hundreds of beds.  Women, children as well as singles (without children) will now have a greater chance of accessing the safe, supportive, and confidential shelter they need.

Viewers of The Meredith Vieira Show were in for a surprise when in response to the Ray Rice headlines, she revealed that she too is a survivor. Her message? "Domestic violence … is really, really a complicated issue. It's not so easy to just get away. You think it would be, but it's not.”

8. New Yorkers are challenged: Be an #UpStander to domestic violence

Before Katy Perry delivered an emotional rendition of "By The Grace of God,” she was introduced by Brooke Axtell, an artist who recounted her emotional story of domestic violence. Millions who watched the Grammys, including survivors, heard the message that help is available and that no one deserves abuse.

10. New campaign engages men in the effort to prevent violence against women

“You taught him how to hit a baseball. But how much time have you spent teaching him…what not to hit?”  Futures Without Violence launched a provocative PSA called #TeachEarly highlighting the pivotal role that men play in preventing domestic and sexual violence.

Major League Baseball and the players union reached an agreement on a new joint domestic violence, sexual assault, and child abuse policy. This new policy will hold players accountable and provide resources for the intervention and care of victims.

12. The Huffington Post reminds us that domestic violence is still an epidemic

With 30,000 likes and nearly 8,000 shares on Facebook, this article provided 30 staggering stats that help us all to understand the severity of domestic violence and why it continues to be an urgent issue today.

The WWE has been plagued by domestic violence allegations towards its talent in the past and after the backlash the NFL faced, WWE took a strong stance. "Upon arrest for [DV], our Superstars are immediately suspended, and should there be a conviction, that Superstar or Diva would be terminated,” stated Stephanie McMahon, WWE’s chief brand officer.

14. Italian PSA asks young boys to slap a girl. What!?

An Italian news company called Fanpage.it took to the streets of Italy to ask young boys, ages six to 11, a few questions. Then comes the controversial statement: slap the young girl in front of you. But not one obliges.  This PSA was featured on numerous news outlets around the world with many viewers inspired by the young boys’ reactions.

15. First ever Domestic Violence Response Team in public housing is established in NYC

The Mayor's Office to Combat Domestic Violence established a specialized team to conduct outreach at public housing developments and let the community know of the supports and resources available for victims and their families.  Since the launch, 400 New York City Housing residents were connected to services.

Part of the Public Theater’s Public Forum program, “An Evening with Desdemona & Emilia,” brought together actresses Cynthia Nixon, Uzo Aduba and others to explore themes of domestic violence that are still relevant today.

17. Safe Horizon explains the seven things that are proven to end domestic violence

Often missing from the passionate discussion around domestic violence this year was an understanding of what is actually working to end this epidemic and how people can support real change. Based on research, these top seven interventions do work.

Tamron Hall, who lost her sister to a tragic incident of domestic violence, participated in a live Twitter chat about the issue for Investigation Discovery’s (ID) campaign, INSPIRE A DIFFERENCE and Safe Horizon’s #PutTheNailinIt campaign. The Twitter chat used the hashtag #INSPIREADIFFERENCE and reached over three million people.

19. Advocates win fight to get priority status for victims in public housing

In early summer, The New York City Housing Authority offered 200 units designated the highest priority to domestic violence victims living in shelter. This was after advocacy efforts from service providers like Safe Horizon who called for more affordable and permanent housing for victims.

A powerful 30-second PSA that features celebrities encouraging Americans to take a vow to end domestic violence is launched. Produced by Arnold Worldwide and Safe Horizon, the PSA has aired on Verizon FiOS, Investigation Discovery, PIX11 and to date was viewed more than 10,000 times on YouTube.

21. A NJ case raises concern: is there a high rate of violence within law enforcement families?

There was one case featured in the media that angered many:  ex-cop Philip Seidle murdered his ex-wife in broad daylight. There are special concerns when an abuser is also an officer. They have legal access to firearms and can often locate confidential shelters.

The Azusa Police Department in Los Angeles released a video of officers in uniform with their left ring fingernails painted purple as a sign of support for victims of domestic violence, joining Safe Horizon’s #PutTheNailinIt campaign. This light-hearted video sends a strong message: domestic violence won’t be tolerated by these officers.

The NYPD and the Manhattan’s District Attorney’s Office partnered with Safe Horizon to launch a Child Trauma Response Team demonstration project. The 30-month project, informed by a national model of law enforcement and mental health collaboration, is designed to reduce the negative impact of children’s exposure to severe domestic violence.

In a video that was viewed more than nine million times on Facebook, Emma Murphy of Ireland publicize her heartbreaking story because she wanted to raise awareness for other victims.

Many media outlets, including many LGBT outlets, picked up the story of 20-year-old Bryan Canchola who allegedly murdered his boyfriend after a domestic dispute. This case brought national attention that domestic violence is also prevalent in same-sex relationships.

26. New bill would give domestic violence victims in California control of cellphone

Advances in wireless technology now allow abusers to monitor their victims’ call records and sometimes their physical location if they are the holder of the account. This new bill would authorize courts to require wireless telephone service providers to transfer the telephone number and account responsibilities to the victim, so that abusers no longer have access to this sensitive information. Advocates are eagerly waiting the passage of the bill.

27. A Maryland cop provides a safe haven to a domestic violence survivor and her baby

The survivor and her one year old baby girl had nowhere else to go for the night, so Officer Ché Atkinson paid for their hotel room.  Atkinson’s actions touched many.

“Straight Outta Compton,” a biopic about Dr. Dre’s hip-hop group, N.W.A., opened to an impressive $56 million in ticket sales. Yet the film ignored his history of violence towards women. After public pressure, Dr. Dre issued an apology, “I apologize to the women I’ve hurt. I deeply regret what I did and know that it has forever impacted all of our lives.” But was it enough?

After 44 years on Sesame Street as “Maria,” Sonia Manzano officially retired from the show. But it’s her experience with domestic abuse that makes headlines. Her new memoir details watching her father beat her mother with a broken table leg. As Maria she wanted to “provide a little bit of solace through [Sesame Street] for children in [similar] situations.”

One special elementary school in Kentucky has added the #PutTheNailinIt campaign to their curriculum. Local media LEX 18 covered this heart-warming story, showing it’s never too early to take a stand against domestic violence! 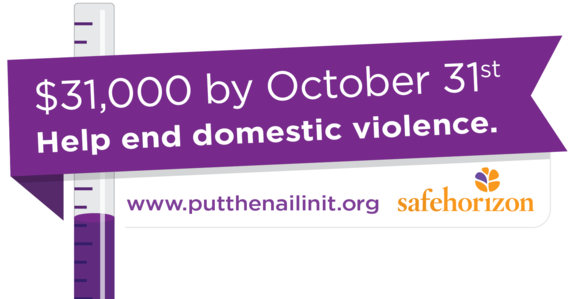 Help us make this a reality and one of the 31 most powerful moments this year. Our goal is simple: let’s move victims of domestic violence from crisis to confidence by raising $31,000 by October 31st to provide them with the support they need: shelter, counseling, hotline services and other proven solutions to end domestic violence. Learn more and donate now at www.putthenailinit.org