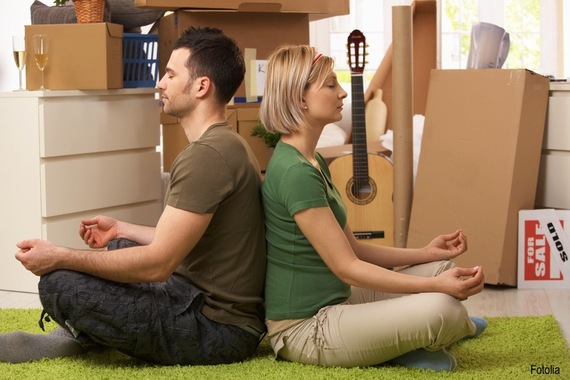 They say moving is one of life's greatest stressors -- right up there with death and divorce. I'd like to see the stats on moving as a cause of death and divorce because if anything will make you feel murderous and conflicted, it's moving.

After living in the same home for 18 years and in the same community for nearly 30, my husband and I relocated halfway across the country and have now moved three times in less than three years. So, you'd think I'd have moving down to a science by now. I don't. Unless it's a Psych 101 experiment designed to discover how many ways a move can make you completely insane.

After a charming apartment that was close to the beach but way too small, and a house whose breathtaking view did not outweigh its considerable deficiencies and not-so-charming landlord, we found The One. Or so we thought. My husband and I are realistic enough to know that nothing's perfect, but the house seemed ideal, suiting our home office needs and general aesthetic in many ways. I was thrilled to have a fireplace again, a beautifully remodeled kitchen, and a different but spectacular view -- all in an attractive, hilly, quiet neighborhood.

We were high-fiving and congratulating ourselves on moving day because everything went so smoothly. For the first time ever, we had high praise for our movers; they were efficient, polite, didn't break or damage anything, and were out by 3 p.m.

It was the calm before the storm.

You know that old bumper sticker: Sh*t Happens? If our first month in this house has a theme, it's that. And I don't just mean figuratively. There were rodent droppings in the basement (canyon life!) and we've now been Roto-Rooted twice.

After being homeowners for so long, it's been difficult to rely on others to make decisions about repairs... even harder to wait as they take their time doing so. It's an exercise in surrender and patience.

In my spoiled, First World sensibility, I work on feeling grateful, instead of put out, every time another problem arises. I am frequently unsuccessful.

I tried to stay positive as my wet clothes sat in the dryer for days before an electrical mystery was solved... And I tried to be understanding as I waited for a promised brand new dishwasher... How rustic to hand wash dishes for a week or so! But I wasn't smiling when the big box containing the shiny new appliance was delivered with a blasé, "Oh, no, we don't install them."

On our third evening in the house, tired of takeout, I was anxious to prepare our first home-cooked meal in my brand new kitchen. But two minutes after turning on the oven, an error code popped up on the fancy digital display and the oven turned itself off. I tried it again. And again. And despite my near mania, the person fielding my after-hours emergency call informed me that a non-working oven is, in fact, NOT an emergency, even though it felt like one after three days of electricians, plumbers and exterminators.

It would be another eight days before I had a working oven. After that, a whole week went by without any problems. I began to relax, to think the worst was behind us. We hung pictures and settled in. Then, at 10 p.m., just as we were getting ready for bed, the tubs and toilets in both bathrooms inexplicably began to fill with filthy water. This house was like the Titanic! Should we bail? I really don't want to go down with the ship...

In the previous few days, I'd had a massage and acupuncture and taken two yoga classes. I felt more peaceful than I had in months. Was I going to let this late-night plumbing emergency -- yes, they DID consider this an emergency -- plunge me back into insane, panicky despair? No! I was not going to wallow in the mire.

I came up with this spontaneous 32-point plan. It changed minute by minute, but nobody died and we're not getting a divorce, so I guess it worked. Here's what I did:

1. Remembered to breathe. The breath gave me patience as we waited for what seemed an eternity for help to arrive, and stemmed the temptation to be über pissed off.
2. Got dressed. (I didn't want to greet the Roto-Rooter guys in my nightgown.)
3. Sat on the deck, enjoyed the view and breathed in the cool night air.
4. Finished a craft project I'd stalled out on.
5. Crossed my fingers in hope that I wouldn't have to use the bathroom.
6. Wondered if we should book a room at the Marriott.
7. B-r-e-a-t-h-e-d some more.
8. Poured a glass of wine and sipped very slowly. (See #5)
9. Worked the New York Times crossword.
10. Wondered if the house or we were cursed.
11. BREATHED!
12. Used toilet. Didn't flush.
13. Thought about cleaning the bathroom floors and washing all the towels used to mop up.
14. Tried not to cry.
15. BBBRRREEEAAATTTHHHEEEDDD.
16. Reminded myself that emotions are okay but don't have to be indulged to the point of hysteria.
17. Thought of how people in Haiti and Nepal have it much, much worse.
18. Felt bad that loud Roto-Rooter machine may be keeping neighbors awake.
19. Gave thanks for husband who was cleaning bathroom floors.
20. Considered investing in Roto-Rooter franchise.
21. Felt jealous that dog was sleeping and I wasn't.
22. B R E A T H E D.
23. Located box of latex gloves and placed wet towels in trash bag.
24. Marveled at how I was still awake (barely) at 12:45 a.m.
25. Inhaled deeply through nostrils.
26. Exhaled loudly through mouth.
27. Considered Stephen King's admonition that "the road to hell is paved with adverbs."
28. Prayed owner will agree to the more extensive work that's needed.
29. Changed back into nightie.
30. Turned out lights at 1:30 a.m.
31. Reminded self to be grateful.
32. Breathed myself to sleep.

Maybe you've got a big move coming up or maybe there's just a lot of sh*t happening in your life. Whatever's stressing you out, I encourage you to breathe. Because it's not all about that bass... it's all about that breath. Deep, slow breaths that connect to your center, your source, your light, whatever it is that gives you strength.

What helps you most when the you-know-what hits the fan?