In 2011, several articles sprouted up about in vitro meat, which is created from meat tissue grown in a lab. While this "frankenfood" might make some consumers uneasy, groups like PETA are in support.

After several years of development, the in vitro hamburger is nearly ready for its public debut. A recent New York Times article explores the potential impact of this test tube burger, created with 20,000 thin strips of cultured muscle tissue. While the potential for the burger's influence on the food system might be far-reaching, it isn't exactly coming to a plate near you -- yet:

But the meat is produced with materials — including fetal calf serum, used as a medium in which to grow the cells — that eventually would have to be replaced by similar materials of non-animal origin. And the burger was created at phenomenal cost — 250,000 euros, or about $325,000, provided by a donor who so far has remained anonymous. Large-scale manufacturing of cultured meat that could sit side by side with conventional meat in a supermarket and compete with it in price is at the very least a long way off.

The video above explains some of the potential benefits of this pricey lab creation. In vitro meat could reduce greenhouse gasses and free up land traditionally used for mass-scale farming. The video also claims that once the burger becomes cheap enough, it could also be used to reduce hunger and famine.

But before that happens, there are several other immediate concerns to figure out, such as public acceptance of eating meat that isn't exactly raised on a farm.

Would you eat it? 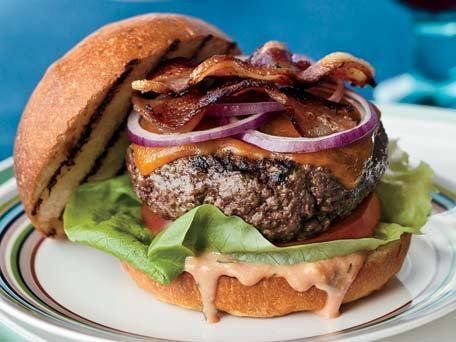