33 Jane Birkins by Agnès Varda
On identity expanded in Jane B. par Agnès V
By Kevin B. Lee 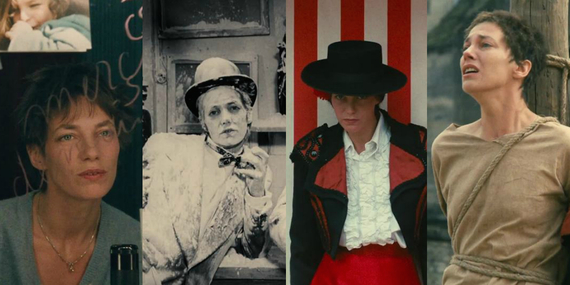 A few of the many faces of Jane Birkin in 'Jane B. par Agnes V.'

The legendary filmmaker Agnès Varda just concluded a weeklong residence at the University of Chicago that celebrated her with a full schedule of screenings and talks. One of the several films presented in the series was Jane B. par Agnès V., Varda's 1987 experimental biography with the actress-musician Jane Birkin made on the occasion of Birkin's fortieth birthday. A landmark in feminist cinema, the film is a thoroughly collaborative effort between filmmaker and subject, narratively driven by a conversation between the two that makes plenty of room for tangential flights of fancy as Birkin not only recalls but imagines the many facets of her personal and creative life, putting on different costumes to enact each. This video tallies thirty-three different looks of Birkin found in Jane B. par Agnes V., attesting to the film's playful and expansive approach to exploring the possibilities of female identities.

Update: Jane B. par Agnes V. screens alternately with Kung Fu Master!, another collaboration between Birkin and Varda, this week at the Lincoln Plaza Cinema in New York City. Those not in New York can watch both films on Fandor.

33 Jane Bs by Agnes Varda from Fandor Keyframe on Vimeo.

Kevin B. Lee is Chief Video Essayist at Fandor. He has made over 250 video essays exploring film and media. Follow him on Twitter at @alsolikelife.