The last time the Lions won a title I was just a few months past my negative-seventh birthday. Sure, it would be unfair to point out that there has been only one playoff win for our sad NFL franchise since 1957 -- against the 1991 Dallas Cowboys who had an injured Troy Aikmann.

So instead, I'm going to celebrate on the best day of a Lions fan's year -- NFL Draft Day. But to be fair, I'm not going to analyze their ineptitude identifying talent since the Eisenhower years -- again, that would be cruel. I'm just going to start when I began following this incredibly consistent team.

Two teams that didn't exist until 1976 have since won Super Bowls, the Tampa Bay Buccaneers and the Seattle Seahawks. When I started paying attention to football by wondering what my father was screaming at in our family room (as well as, I suspect, my buddy's Cowboy cheerleader poster) I've seen Dallas go from great, to terrible, to great, to bad, to good, to disappointing but still expected to be in the playoffs.

So tonight I'll be compulsively watching the ESPN show with Chris Berman and his terrible puns, Mel Kyper with his analyses and a thousand commercials for beer, trucks, and mid-life crisis males needing a little boost to help them in their kitchen romances with their wives carrying in the groceries -- only to end up in two bathtubs in the yard looking at a sunset. So during those exciting commercials, Lions fans, enjoy the moment and dazzle/bore your friends with life's greatest "what-ifs."

For tonight our team is undefeated. Tonight, they're going to draft the missing 14 pieces to the puzzle -- all in the first round. Tonight, during those long pauses between trips to the podium, we can all travel the familiar road of 35 years of draft picks yielding 13 Pro-Bowlers and one Hall-of-Famer.

To quote Sesame Street's famous quiz-song, "One of these things is not like the other, one of these things just doesn't belong..." We'll take a quick glimpse at the 1999 draft's Top 11 picks and you'll notice the few white squares of non-Pro-Bowlers selected. 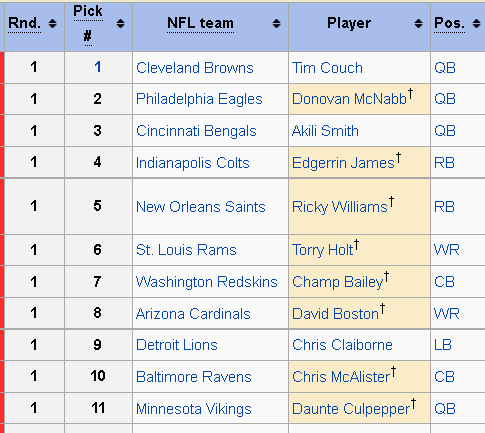 Most of my metro-Detroit contemporaries know the following list pretty well, but a morning tour of Wikipedia allowed me to pour even more salt into my favorite wound--the ones who got away. Sure, they got away from a lot of other teams, but let's not throw logic into our lovely misery!

We'll look at the Lions first-pick, then some notables they coulda-had! (Lions draft-picks that are in bold made a Pro Bowl. Underlined and bold (aka Barry Sanders) also made it to Canton.

Just let Lions fans savor the pain and enjoy our dreams for this lone day of the year.