Do you believe in angels? Forty-five percent of Americans do. In fact, roughly 48 percent - Republicans and Democrats alike - believe in some form of creationism. A hilariously large percent of terrified right-wingers are convinced Obama is soon going to take away all their guns, so when the Newtown shooting happened and 20 young children were massacred due to America's fetish for, obsession with and addiction to firearms, violence and fear, they bought more bullets. Because obviously.

In sum and all averaged out, it's safe to say about 37 percent of Americans are just are not very bright. Or rather, quite shockingly dumb. Perhaps beyond reach. Perhaps beyond hope or redemption. Perhaps beyond caring about anything they have to say in the public sphere ever again. Sorry, Kansas.

Did you frown at that last paragraph? Was it a terribly elitist and unkind thing to say? Sort of. Probably. But I'm not sure it matters, because none of those people are reading this column right now, or any column for that matter, because reading anything even remotely complex or analytical is something only 42 percent of the population enjoy doing on a regular basis, which is why most TV shows, all reality shows, many major media blogs and all of Fox News is scripted for a 5th-grade education/attention span. OMG LOL kittens! 19 babies having a worse day than you. WTF is up with Justin Timberlake's hair?!?

It is this bizarre, circular, catch-22 kind of question, asked almost exclusively by intellectual liberals because intellectual conservatives don't actually exist, given how higher education leads to more developed critical thinking (you already know the vast majority of university professors and scientists identify as Democrat/progressive, right?) which leads straight to a more nimble, open-minded perspective. In short: The smarter you are, the less rigid/more liberal you become.

Until you get old. Or rich. And scared. And you forget. And you clamp down, seize up, fossilize. And the GOP grabs you like a mold.

Oh right! The question: How to reach the not-very-bright hordes, when they simply refuse to be reached by logic, fact, or modern mode? How to communicate obvious and vital truths (conservation, global warming, public health, sexuality, basic nutrition, religion as parable/myth, the general awfulness of Mumford & Sons) the lack of understanding of which keep the country straggling and embarrassing, the laughingstock of the civilized world?

And who are these people, exactly? And are they all really in Kentucky and Florida and Mississippi? Are they all in the Tea Party? Is failing education to blame? A dumbed-down media? Reality TV? In the wealthiest and most egomaniacal superpower in the world, why is the chasm so wide?

There is no easy answer, but there is a great deal of irony. It is a wicked conundrum that you and I can debate the definition of elitism, whether or not it's fair to criticize those who believe that, say, gay marriage means kids will be indoctrinated into homosexuality, or that evolution is still a theory, or that Jesus literally flew up out of a cave and into the sky, when the discussion itself is, by nature, elitist, exclusionary, requiring fluid, abstract thinking the very people we're discussing simply do not possess, and therefore cannot participate in.

Discussion of elitism is elitist. Intelligence can talk itself blue about what to do about all the dumb; the dumb will never hear it.

It's a fact even recognized by Louisiana's own Gov. Bobby Jindal, who had the nerve to defy his own state's (and his own party's) famously low IQ by saying, after the last election, "The GOP must stop being the stupid party. It's time for a new Republican Party that talks like adults."

Of course he's right. But where would that leave their base? And who will tell the megachurches? And does Jindal not know Louisiana is where they teach that the existence of the Loch Ness monster is evidence that evolution is a lie? 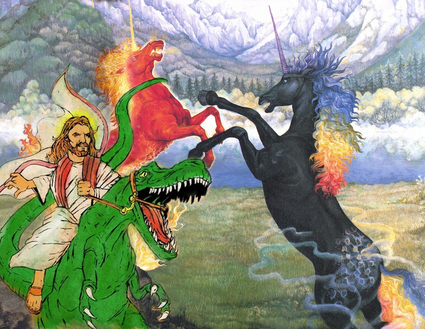 Brings to mind a stunning study about facts and truths. Have you ever heard it? It goes something like: Here is hard evidence, scientific evidence, irrefutable proof that something is or is not true. Here is dinosaur bone, for example, which we know beyond a doubt is between 60 and 70 million years old. Amazing! Obviously!

But then comes the impossible snag: If you are hard-coded to believe otherwise, if your TV network or your ideology, your pastor or your lack of education tell you differently, you will still not believe it. No matter what. No matter how many facts, figures, common senses slap you upside the obvious. You will think there is conspiracy, collusion, trickery afoot. The Bible says that bone is only eight thousand years old. Science is elitist. Liberals hate God. The end.

It is not enough to say people believe what they want to believe. They will also believe it in the face of irrefutable counter-evidence and millennia of fundamental proof.

This! This is what stuns and stupefies liberals and progressives of every intellectual stripe. We cannot understand. We cannot compute. We think, "Well, if more people just had the facts, just heard a reasonable and cogent argument or read up on the real science, surely they would change their minds? Surely they would see the error in their thinking?"

Oh, liberals. All those smarts, and still so naïve.

Here is the body of Jesus! We found it! In a cave in a hole deep in an iron-gated alcove beneath the Vatican!...

Mark Morford is the author of The Daring Spectacle: Adventures in Deviant Journalism, a mega-collection of his finest columns for the San Francisco Chronicle and SFGate. He's also a well-known E-RYT yoga instructor in San Francisco. Join him on Facebook, or email him. Not to mention...