We asked our readers, "How do you know when a relationship is about to end?" Their answers make an excellent guide to impending doom. Here are our 37 favorite responses:

"When I hate to see the man eat, I know things are over." -- Lovereaction

"When he doesn't have time for me. There is always an excuse. He doesn't call me like he used to, makes up excuses, never sees me, and always expects sex, different sex than what we used have." -- Robee

"When I wasn't excited to see him after we'd been apart for a while." -- Katie

"When he's
always
choosing his buds over you." -- Madamoiselle

"When you realized it has been two weeks since you last heard or saw the guy." -- Julie

"When the power balance shifts one way or another. When one partner starts controlling the actions of the other using ultimatums and guilt rather than open
communication
. It often takes a while to recognize it, but I know the relationship is over if she's changing who she is deep down for me. or is trying to change me with psychological ploys." -- Doug

"When he does not call you back." -- Patricia

"When you get into a fight and words you never thought that person would say come flying out their mouth!" -- Nicole

"When the other person no longer speaks to you in a respectful manner, and communication stops or slows to a grinding halt." -- Hopelessly Single

"When he refuses to talk things over or listen, when everything becomes routine and when you do not look at each other with
love
anymore." -- Ana

"When you have to wait around to get a
phone call
from him or wait to see when he'll ask, 'When can I see you?' If you have to wait for him to ask and it's only when he wants, then it's over." -- Grace

"When you
snoop
and find something." -- D

"When you completely don't trust him anymore." -- Nicole

"When you find another woman you
lust
over. What makes it so bad, you still love the person you are with, but she can't stand your face anymore because she knows you want to get in somebody else panties and hers too. You know she is the best thing that has happened to you, and you still want somebody else. How many men are screwed up like me?" -- Ron

"When you put your all in and get nothing back in return. Then the love turns to resentment. You try talking and all it ends up in is an argument." -- Tam

"When you find yourself in a situation that you need your partner's help, and they send someone else." -- Tam

"When they have been in one room for hours and you finally come in, then they walk out." -- Tam

"When you can't view or use his cellphone anymore." -- Tam

"When your conversations are less than 15 minutes a week, the numerous
texting
dwindles, and when you do talk, whether he calls or you call, he always tells you that he will call you back." -- Stefanie

"When I don't care what the hell he thinks, feels or does anymore." -- Opinion

"When I prefer hanging with the girls than being around him." -- Opinion

"When no
kissing
during sex becomes normal. When a guy stops kissing you, it's either one of two things: You have bad breath or HE IS JUST NOT THAT INTO YOU." -- Opinion

"When his presence starts to irritate me and the idea of having sex makes me want to vomit." -- Lexi

"When another man is catching my attention." -- Daisy

"The feeling of not wanting to be with him, be close to him or kiss him." -- Karen

"When a guy calls less frequently or takes less effort with his hygiene and appearance or rarely looks at you or doesn't answer questions." -- Madamoiselle

"When he starts fights about stupid stuff, goes around LOOKING for things to get mad about." -- Madamoiselle

"When the person does something that is so at odds with what I believed them to me that I no longer like them. Or when I feel ill at the thought of touching them, but those both are usually connected since if someone alienates me emotionally I won't fancy them any more." -- Mab

"When the thought of kissing him starts to nauseate me and I have to force myself to be intimate with him." -- Pepper

"When I have to ask when I'll see him next, and I start to think, 'Maybe he's just been really busy lately.'" -- Karen

"When I feel nervous about seeing him, as though we're both 'trying' instead of being ourselves." -- Karen

"When, after or during a meaningless fight or when seeing socks on the floor*, I stomp my foot and start thinking, 'Or maybe we should just
break up
right away and everyone would be better off.' And if this thought comes up more often, and starts to linger, and then suddenly my mind can get used to the idea that breaking up would actually not be the end of the world. Then it's practically over." -- Trillie
* socks on floor stand for: This kind of meaningless stuff that annoys you but shouldn't really annoy you when you're in love and this is The One.

"When I begin to feel chronically henpecked/nagged/criticized. Not just sometimes. All couples have wrinkles to iron out. But when I feel routinely set upon about stupid stuff, when trivial things start becoming fights, when instead of addressing her criticism I reply, 'Get off my freakin' back'...it's as good as over." -- Johnny

Need help moving on?
10 Journal Prompts to Help You Get Over a Breakup

PHOTO GALLERY
Someecards For Your Ex
Download
Calling all HuffPost superfans!
Sign up for membership to become a founding member and help shape HuffPost's next chapter
Join HuffPost 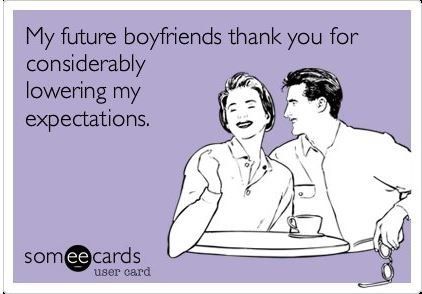