The postmortem brain of a 65-year-old woman has been transformed into a new 3D map revealing the intricate architecture of the human noggin on a scale finer than a human hair.

The map, known as "BigBrain," is freely available online, and has a resolution of 20 microns in each dimension, researchers report in a new study.

"The BigBrain is the first ever brain model in 3D which really presents a realistic human brain with all the cells and all the structures of a human brain," study researcher Karl Zilles of the Juelich-Aachen Research Alliance and the Research Center Julich in Germany said in a press briefing Wednesday (June 19). [Inside the Brain: A Photo Journey Through Time] 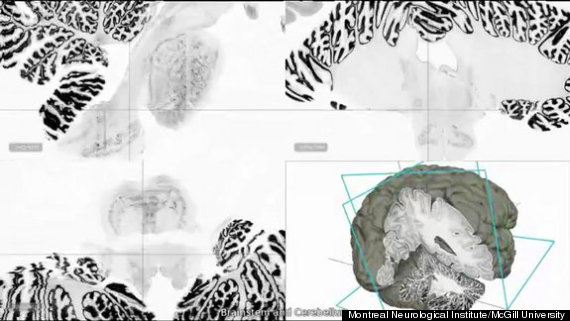 A new 3D brain map reveals the human brain in the greatest detail ever. Here, a detailed look at the brainstem and cerebellum from the BigBrain project.

BigBrain will serve as a reference brain, which provides scientists with a common tool for describing the brain at a microscopic scale. "It's just like a map of a country," said Christof Koch, chief scientific officer of the Allen Institute for Brain Science in Seattle, who was not involved in the research. "If we want to know where to go, it's important to know the lay of the land," Koch said.

The first comprehensive brain map was produced by German neurologist Korbinian Brodmann at the turn of the 20th century. Brodmann's map revealed the brain's detailed structure, but in just two dimensions. Modern reference brains have been mapped using magnetic resonance imaging (MRI), but these only have a resolution of about 1 cubic millimeter. In contrast, the BigBrain has a resolution that's 50 times better.

To create BigBrain, the researchers used a tool called a microtome to slice the postmortem brain (embedded in paraffin wax) into more than 7,000 sections, each 20 microns thick (about the thickness of plastic cling wrap). They mounted the sections on slides and stained them to reveal the cellular architecture. The slides were then scanned and reconstructed by a supercomputer into a 3D brain. The entire process took about 1,000 hours of labor. 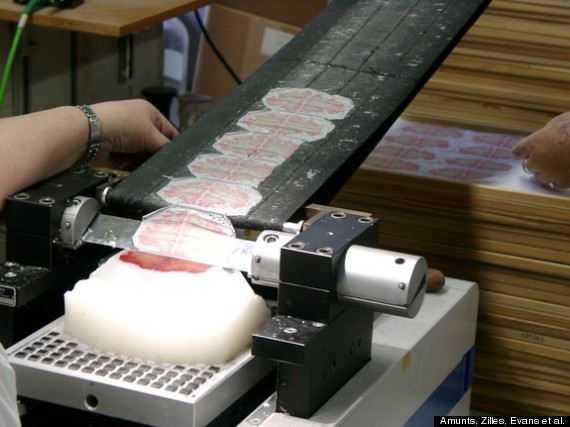 Researchers use a special tool called a microtome to cut sections from a brain preserved in paraffin wax into tiny slivers 20-micrometers thick.

Because the brain sections are so fragile, working with them often creates rips and tears in the tissue. Using image-processing tools, the researchers were able to repair these small imperfections.

The new reference brain will allow researchers to model the brain and study various brain diseases at the microscopic level. For example, the data from brain-imaging studies could be integrated with BigBrain to improve the spatial resolution. BigBrain could also be used to guide the placement of electrodes for deep brain stimulation, an effective treatment for the tremors of Parkinson's disease.

BigBrain's developers are currently working on incorporating information from molecular studies of the brain, including research findings on chemical receptors or gene activity. The Allen Institute for Brain Science, which has developed detailed maps of the gene activity in the mouse and human brains, is considering a possible collaboration with BigBrain, Koch told LiveScience.

BigBrain provides a detailed view of one brain, but there's variability between brains of different people. Future efforts may expand the map to take into account some of this variability, the researchers said.

The Brain As Art