Mapping the cosmos sounds like a daunting challenge, but now an international team of astronomers has managed to do just that.

Using a powerful new computer algorithm and observational data from one of the world's biggest telescopes, the astronomers have created a luminous 3D map of the universe as it was just 3 billion years after the Big Bang (the universe is now 13.8 billion years old). 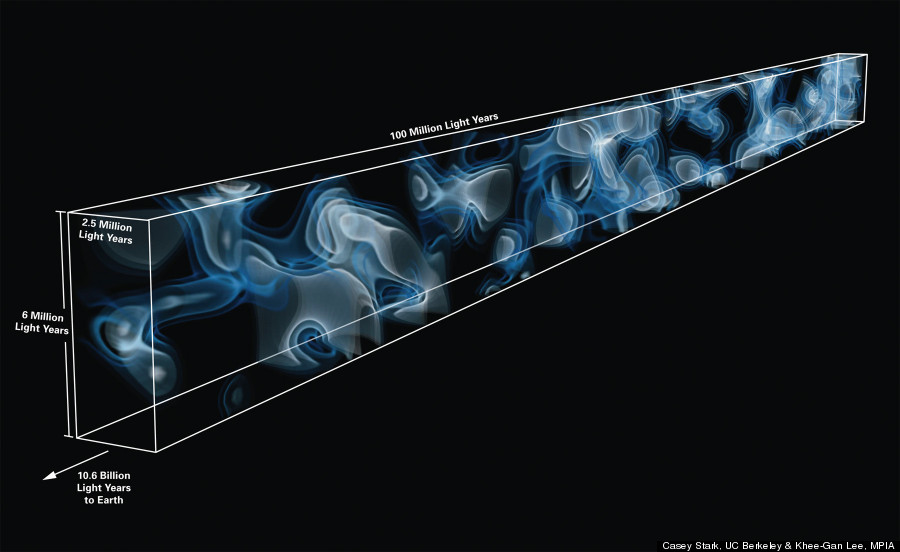 The map shows the 'cosmic web' at a distance of 10.8 billion light-years from Earth. Bright areas represent high densities of hydrogen gas.

The astronomical equivalent of a medical CT scan, the so-called "Lyman-alpha tomographic" map gives an unprecedented look at the cosmic web -- the vast galaxy-containing filaments that form the backbone of the universe.

To create the map, the team -- led by Dr. Khee-Gan Lee of Germany's Max Planck Institute for Astronomy -- pointed the 10-meter Keck I telescope atop Mauna Kea volcano on Hawaii's Big Island on a portion of the sky equivalent to one-tenth of the full moon. The telescope picked up light from galaxies more than 15 billion times fainter than the faintest stars visible to the naked eye, according to a written statement issued by the institute.

That's something Lee wasn't quite sure was possible with the telescopes now in existence.

"The prevailing wisdom was that gargantuan 30-40 meter diameter telescopes of the future will be required to collect enough signal to make this kind of map," Dr. Khee-Gan Lee, a postdoctoral researcher at the institute, told The Huffington Post in an email. "But we definitely see distinct and coherent cosmic web structures in our map rather than 'static' like one might get from a bad television signal. The giant future telescopes will allow us to make higher-resolution versions of this map but it's exciting to try out the technique already." 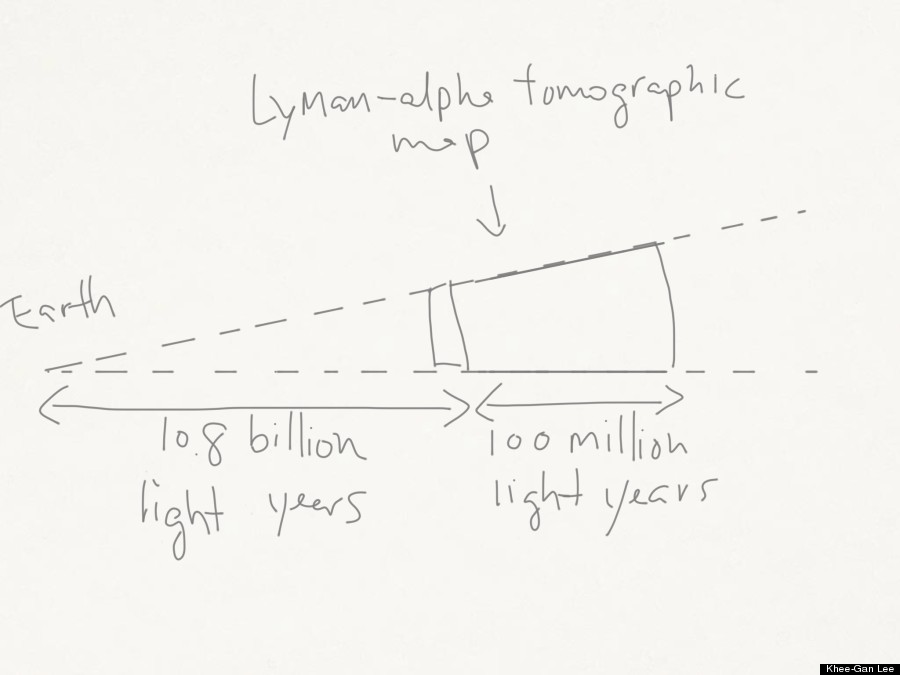 If you imagine the entire observable universe as a giant sphere with Earth in the center, the map would be represented by the outer portion of a small wedge of the universe originating from its center (though the sides of the wedge are more nearly parallel than this drawing suggests).

The observational data were crunched with the help of an algorithm custom-designed for the project by researchers from the University of California at Berkeley and Lawrence Berkeley National Lab.

The map is more than just a thing of beauty. As reported by Universe Today, the team hopes it will yield more information about how the cosmic web functions -- the way that gas in deep space is funneled into distant galaxies. Or, as Lee told HuffPost Science in the email, "We will use it to search for 'galaxy protoclusters,' which are the ancestors of the huge galaxy clusters we see in the Local Universe. These protoclusters should show up as large 'blobs' within our map and will give important insights into the formation mechanism of modern-day galaxy clusters."

A paper describing the research was published in The Astrophysical Journal Letters.

Early Space Missions And The Astronauts Who Led Them