These days, restaurant dishes can’t be customized too far beyond requests to hold the dressing or to cook the meat medium-rare.

But thanks to 3D printing technology, along with the proliferation of sensors tracking our activities and tastes, future meals -- even mass-produced ones -- could be tailored specifically to suit an individual’s dietary needs. A dish someone is served might even be calibrated to the calories she burned that day.

Jeffrey Lipton, a doctoral candidate at Cornell University’s Creative Machines Lab and chief technology officer of Seraph Robotics, argues that the emerging category of data-driven food is destined to make up a much larger part of our diet in the years to come.

Lipton predicts that cloud computing, 3D printing and the explosion in digitized personal data will together allow for the mass customization of meals, letting chefs instantly produce dishes that offer the recommended quantities of sugar, fat or sodium when given diners' health records.

Instead of eating a quarter of a donut to cut calories, you instead might be able to buy a whole pastry from the corner deli, then watch the donut 3D printed before your eyes -- with one-fourth the calories and just the right amount of fiber to bring you up to your daily minimum.

"Once you have the automatic collection of what you’re eating and when, you can predict -- based off your activity levels, your planned diet and your health records -- exactly how much and what types of food you should be eating. That’s really ultimately the long-term potential of food printing," explained Lipton during a lecture at the Inside 3D Printing conference in New York City on Tuesday. "It’s going to be about this automated production of food where you have the entire cloud of information helping to guide you forward."

Some of the latest cutting-edge research taking place in Cornell University’s Fab@Home lab, which explores personal fabrication, has focused on something deceptively simple: a recipe for snowflake-shaped sugar cookies.

The lab succeeded in printing what Lipton dubs “data-driven cookies.” He and his colleague, Hod Lipson, each compiled information about their height, weight, body mass index, daily schedule and caloric deficit for the day, then used 3D printers to print two cookies that each accounted for 10 percent of their respective caloric deficits.

“They’re both the same size cookies,” explained Lipton, “but composed of different ingredients based on our nutritional requirements.” 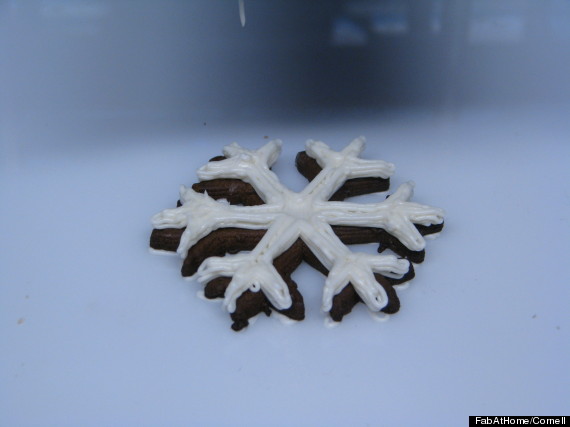 In addition to sugar cookies, chefs and researchers have experimented with 3D-printing everything from scallops in the shape of buildings and chocolates molded after lovers’ faces to pasta, chips and meat. Cake batter, shrimp paste, chocolate, and frosting are used as the raw ingredients for the printers, which build objects by laying down layer after layer of the material in the desired shape. Lipton noted that four publicly-traded food companies have 3D printers they’re using to prototype new edibles. 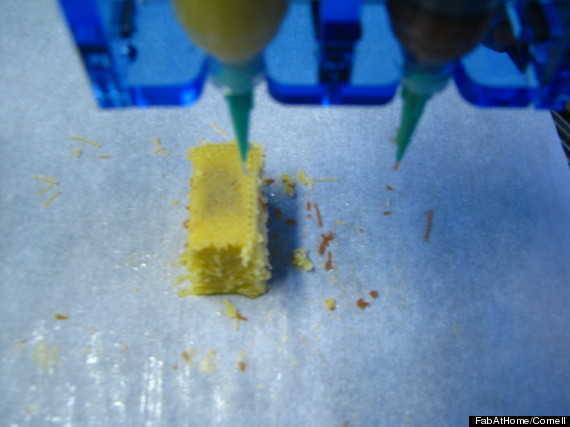 A 3D printer creating a snack.

The concept of customized nutrition on a mass scale holds particular promise for people with strict dietary regimens, such as pregnant women and the elderly. Scientists at the University of New Zealand and TNO, a research institute in the Netrehlands, are also exploring how technology and 3D printing can be harnessed for customized nutrition.

So how long before people can expect to see pizzas printed before their eyes?

In addition to the technical challenges of creating materials that are both edible and printer-appropriate, the cost of 3D printing is still prohibitively high to make mass printed food production feasible. Lipton anticipates that novelty items like birthday cakes and chocolates will be the first areas where 3D-printed foods catch on.

Eventually, however, restaurants might be able to tap information about their diners’ medical history, dining habits and exercise regimens, then whip up meals to precisely suit their health needs, even before they're ordered.

“A computer network could easily ... print out a list of the ingredients the chef needs to put in [a meal] and change the recipe slightly and create a design space for them,” explained Lipton. “If we can automate the production of food, we’ll be able to capture information, store it in the cloud and so the cloud will know what you want in any restaurant before you do.”