Dying patients could someday receive a 3D-printed organ made from their own cells rather than wait on long lists for the short supply of organ transplants. Such a futuristic dream remains far from reality, but university labs and private companies have already taken the first careful steps by using 3D-printing technology to build tiny chunks of organs.

"Bioprinting organs for human uses won't happen anytime soon," said Tony Atala, director of the Wake Forest Institute for Regenerative Medicine in Winston-Salem, N.C. "But for tissues we've already implanted in patients — structures we've made by hand — we're now going back to those tissues and saying 'We know we can do better with 3D printing.'" [7 Cool Uses of 3D Printing in Medicine]

From skin to hearts

The difficulty of building organs with 3D printing falls into about four levels of complexity, Atala said. Flat structures with mostly one type of cell, such as human skin, represent the easiest organs to make. Second, tubular structures with two major cell types, such as blood vessels, pose a greater challenge. 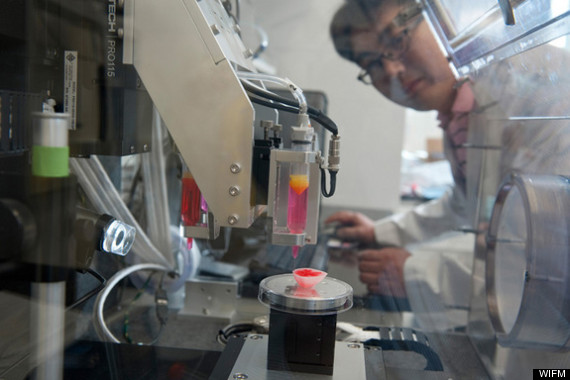 Hyun-Wook Kang oversees the 3D printer that will be used to print miniature organs for the "body on a chip" system.

"With bioprinting, we're approaching it the same way we did with other organs," Atala told LiveScience. "We're going after flat structures first like skin, tubular structures like blood vessels next, and then hollow, nontubular organs like bladders."

Regenerative medicine has already proven it can implant lab-grown versions of the first three types of organs into patients. Atala and other researchers hope that 3D printing's efficiency can scale up the manufacturing of such organs for widespread use, as well as help make hearts, livers and kidneys suitable for implanting in patients.

How to print an organ

Atala's group previously built lab-grown organs by creating artificial scaffolds in the shape of the desired organ and seeding the scaffold with living cells. They used the technique to grow artificial bladders first implanted in patients in 1999, but spent the last decade building 3D printers that can print both an artificial scaffold and living cells at the same time — a process that involves liquid "glue," which hardens into the consistency of gummy candy as it dries out.

Other labs think they can bypass the artificial scaffolds by harnessing living cells' tendencies to self-organize. That avoids the challenge of choosing scaffold material that can eventually dissolve without affecting the living cells, but leaves the initial structure of living cells in a delicate position without the supporting scaffold.

"If you do what we do with putting cells in the right place, you don't start with anything structural to hold things up," said Keith Murphy, chairman and CEO of Organovo, a startup San Diego-based company. "For us, the challenge is the strength and integrity of the structure."

Organovo scientists have experimented with building tiny slices of livers by first creating "building blocks" with the necessary cells. The company's 3D printers can then situate the building blocks in layers that allow the living cells to start growing together.

Stem cells taken from a patient's fat or bone marrow can provide the 3D-printing material for making an organ that the body won't reject, Murphy said. His company worked with Stuart Williams, executive and scientific director of the Cardiovascular Innovation Institute in Louisville, Ky., on extracting the stem cells from fat.

The ability to print full-size functioning organs depends on figuring out how to seed 3D-printed organs with both large and small blood vessels that can supply nutrient-rich blood to keep living tissue healthy. So far, no lab has succeeded in 3D-printing organs with the network of blood vessels necessary to sustain them. [Photos: Printing Tiny Organs for 'Body on a Chip']

Organovo has begun working toward that goal by experimenting with 3D-printing blood vessels 1 millimeter or larger in width. The company has also built tissues containing tiny blood vessels about 50 microns or smaller (1 millimeter is equal to 1,000 microns) — enough to sustain a millimeter-thick chunk of organ.

Even the best 3D printers remain limited when working on the tiniest scales of building blood vessels and organs. But Williams, head of the Cardiovascular Innovation Institute's effort to create a 3D-printed heart, agreed with Organovo that the solution involves harnessing the self-organization tendencies of living cells.

"We will be printing things on the order of tens of microns, or more like hundreds of microns, and then cells will undergo their biological developmental response in order to self-organize correctly," Williams said. "Printing is only going to take us partway."

For now, bioprinting pioneers hope to make use of even the smallest 3D-printed organs. Atala's lab recently received U.S. Department of Defense funding for a collaborative project aimed at printing tiny hearts, livers and kidneys to form a connected "body on a chip" — ideal for testing possible drugs and the effects of diseases or chemical warfare agents on the human body.

Organovo has already started developing a 3D-printed liver model for testing the safety and efficacy of drugs. The startup company is also creating cancerous versions of living tissue models for testing cancer drugs.

The bioprinting revolution could eventually begin to deliver "tissue on demand" within the next 10 or 15 years, Murphy said. That may not fulfill the wildest of organ implantation dreams, but for many patients, it may prove life-changing enough.

"You'll see a heart muscle patch, a blood vessel for bypass or a nerve graft to bridge a gap in a nerve," Murphy said.