Even though anyone willing to shell out $850,000 on a 3D metal printer can now produce fully functioning guns in the legal comfort of their own home, it's not time to cry foul on the emerging technology. A lot of other people are creating some amazingly innovative and non-lethal things that won't leave you wondering which 3D-printed guns can and can't be detected by metal detectors.

Engineers, for example, have long enjoyed using 3D printers to pop out quick prototypes made of thin plastic filament, layered on top of itself to create solid objects. Over the years, the machines have become more advanced, now capable of providing us with other, more widely useful applications, from car parts to body parts. And printers are becoming cheaper, too, meaning it's becoming a lot easier for people to buy them for personal use.

So let's take a moment to appreciate some of the things 3D printing is great for -- other than terrifying the whole world. 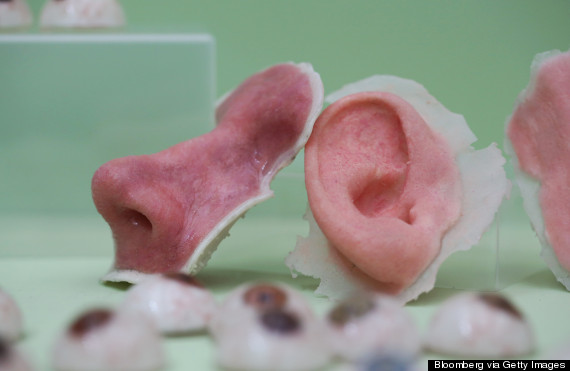 "Conventional maxillofacial prosthetics are incredibly laborious and expensive to produce," Tom Fripp told The Guardian. Silicone ears and noses might cost $4,000 each, constructed by taking an impression of the injured area, sculpting the body part out of wax as it should appear, and then casting that shape in silicone.

By the printer method, researchers have been able to use digital cameras to capture the likeness of an injured area, along with the patient's skin tone, to create a digital model of the needed part before sending it off to a Z Corp Z510 color 3D printer. This costs about the same as a handcrafted prosthetic, but because the parts often become damaged over time, replacements can be made quickly for only about $150. 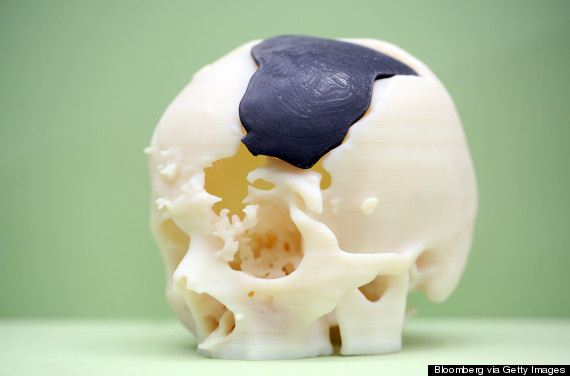 Researchers at Washington State University have been able to print off replacement bones for patients needing orthopedic or dental procedures. When the structures are placed surgically next to actual bone, they act as a bridge, helping the bone repair itself and then dissolving with "no apparent ill effects."

This is especially useful for people who've fractured bones in a car crash or perhaps chipped a tooth on a frozen banana.

NASA debuted a pizza printer at Austin's SXSW Eco in September. They're still working on getting the recipe right -- the pizza they baked at the expo was made of dough topped with ketchup and cream cheese. Almost, but not quite, guys. A heated plate bakes the dish as it comes out.

The space agency is particularly interested in 3D printers, considering how much easier it would be to send one of those into space along with dehydrated ingredients instead of bulkier prepared foods. Long-distance space travel requires food with 15-plus years of shelf life, and the printer ingredients could last up to 30 years. So, the first human beings to set foot on Mars could very well celebrate with a pizza party, and that's awesome. 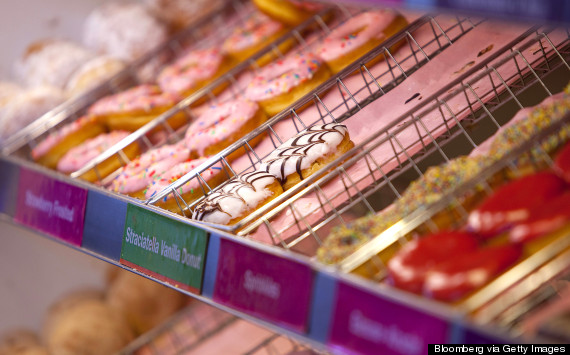 Imagine a future in which someone made a donut just for you -- with just the right amount of calories and maybe some extra fiber for good measure. Except that someone is a machine, and the donut is 3D printed based on the personal health data you've given it.

Researchers at Cornell University's Fab@Home lab demonstrated a printer that did something similar with cookies. Two people fed information about their height, weight and BMI into the printer, which baked two deceptively identical-looking snowflake-shaped cookies that actually comprised different ingredients based on each person's nutritional requirements.

Back in March, Nike started printing a football cleat called the Vapor Laser Talon, which, perhaps unsurprisingly, are said to help athletes run faster. Footwear rival New Balance is also using the technology to scan customers' feet and print out shoes made just for them in nylon polymer.

Seeing that personalization and customization have always been key to haute couture, 3D printing has also slowly begun to invade the fashion world. Architect Bradley Rothenberg scanned Victoria's Secret models to give each a custom-fitting set of "angel wings" to strut around in during the upcoming lingerie show. Dutch designer Iris van Herpen showed off her collection of 3D-printed shoes at last summer's Paris Fashion Week, and Janne Kyttanen created a downloadable wedge heel design that can be printed off and worn the next day. 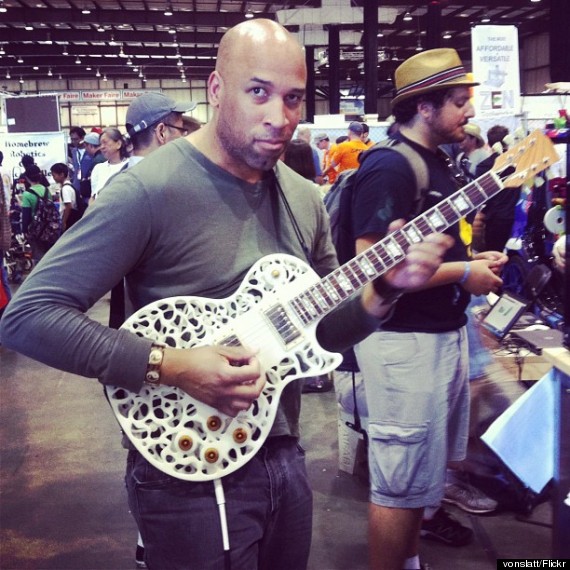 Unlike violins, whose shape and sound doesn't stray far from the classic standard, there's a lot more freedom in guitar design and material use. Pictured above is a fully functional, 3D-printed Gibson Les Paul, displayed at last year's Maker Faire exhibition.

It's also possible to print acoustic guitars. Designer Scott Summit printed one last year, having spent his childhood lusting after a $3,000 model like Jerry Garcia's. He didn't have high expectations for the guitar's sound quality, but apparently it works alright. Summit is already envisioning a future where musicians order custom guitars to produce unique sounds. 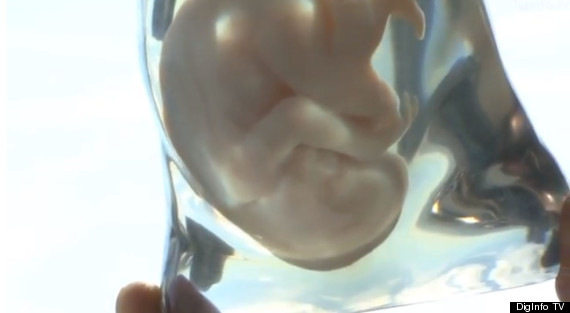 Expectant parents often show off ultrasound scans to friends and family, whose responses may range from enthused to wising the couple would chill out already. Thanks to 3D printing though, a mother-to-be can now capture everyone's attention with a life-size model of her fetus.

Fasotec, a Japanese 3D printing company, and Tokyo's Hiroo Ladies clinic began a service that produces the replicas by scanning a pregnant woman's abdomen. The fetus (which, to be clear, is left unharmed to become a real, live human being) is printed with clear filament so we can all see the semi-formed baby inside, printed in ghostly white. Not creepy at all. 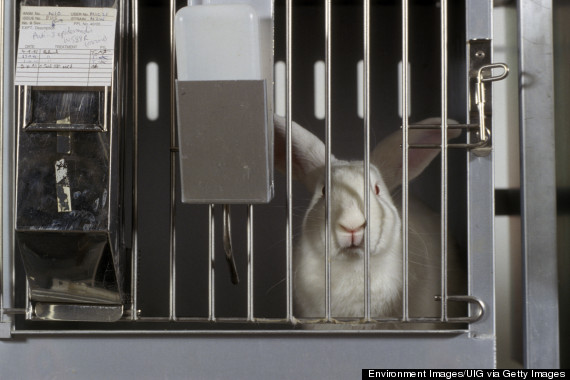 Faulkner-Jones explained that individual patients' cells could even be printed off to test their response to a given drug before it is administered.

It's time to step back and congratulate ourselves -- mankind has advanced to the point of printing in chocolate. Artists in South Africa used another modified MakerBot machine to produce 3D-printed chocolate sculptures as part of a campaign to promote Android's new KitKat operating system.

The collection was displayed at the Museum of African Design in Johannesburg for a few days last week as part of an exhibit called Chocnology.

Mechanics -- and Jay Leno -- have been using 3D printers to make replacement auto parts for years. This capability could prove especially useful for soldiers in the field who might be caught miles away from a repair station.

In two years, a couple of 20-something brothers are slated to drive a 3D-printed car cross-country, when the design is ready. The pod-like thing, named Urbee 2, is efficiently aerodynamic and gets an impressive 300 miles to the gallon. Cody and Tyler Kor, along with their dog, plan on tracing the path driven by the first two men to traverse the U.S. by motor vehicle. 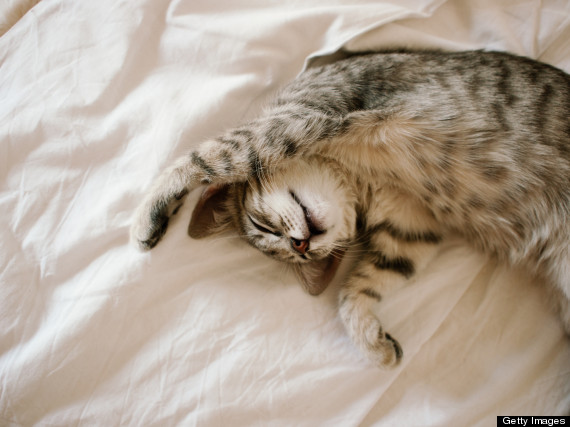 If the Urbee 2 were to meet your family pet in a tragic manner, you can just print a new one! Kind of. Okay, not really. The MakerBot 3D printer has downloadable plans for cat statues that you can create using its models. If that doesn't replace the cat-shaped hole in your heart, it could at least replace the cat-shaped spot on your sofa.

The Most Impractical Phone Accessories