SUZHOU, China -- Walking through WinSun’s show lot in the Suzhou Industrial Park, one gets a glimpse of the past and possible future of building construction. Views from the fifth story of a boxy concrete structure reveal a horizon typical of the outskirts of Chinese cities today: Clusters of construction cranes surround high rises sprouting from rice fields.

Streams of trucks flow to and from these construction sites, carrying in the raw ingredients of China’s construction industry -- migrant workers, steel and lots of cement -- and departing with loads of wood scraps and building waste. It’s a model that has fueled the largest urbanization and housing boom in history, while also helping pollute China’s skies and deplete its natural resources. 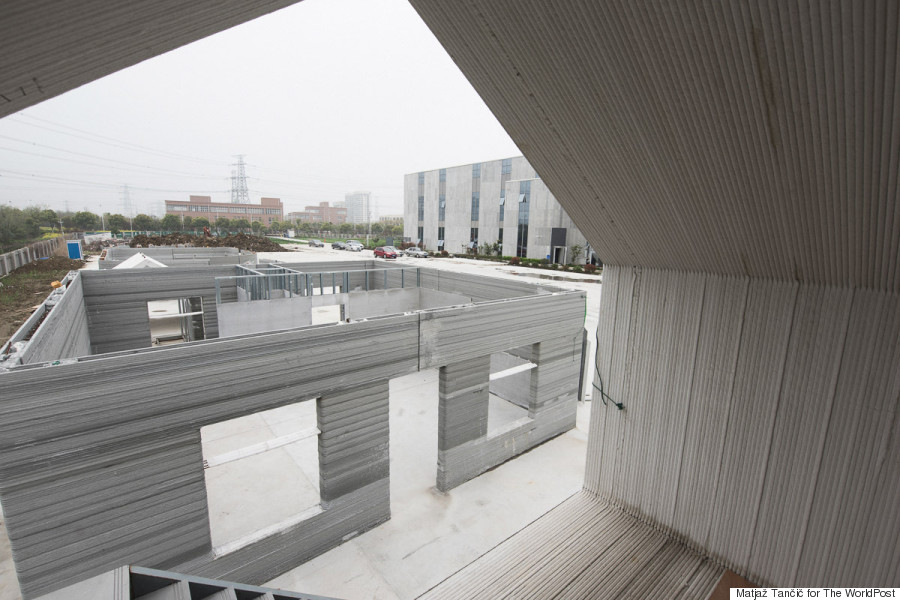 WinSun (Chinese name: Yingchuang) says it wants to overturn that model. That boxy concrete structure isn’t made of the usual blend of ingredients. It was 3-D printed inside WinSun’s factory, using a machine that turns construction waste and digital designs into precisely layered walls. That’s a production model that could upend labor markets, housing markets and the entire architectural design process.

Or it could be a gimmick, a publicity ploy based on stolen technology with no real chance of working in the real world. At this point it's hard to tell for sure, and that’s part of what makes the emerging world of buildings printed in 3-D so fascinating.

WinSun’s 3-D printed structures have attracted equal parts buzz and controversy. The company advertises itself as the breakout innovator in a field that will dramatically reduce building waste and labor inputs. But the academic credited as the founding father of this field says WinSun infringed on his patents, stealing innovative techniques that took him decades to formulate. Developers, architects and researchers remain similarly divided over whether 3-D printed houses are safe, affordable or even desirable. 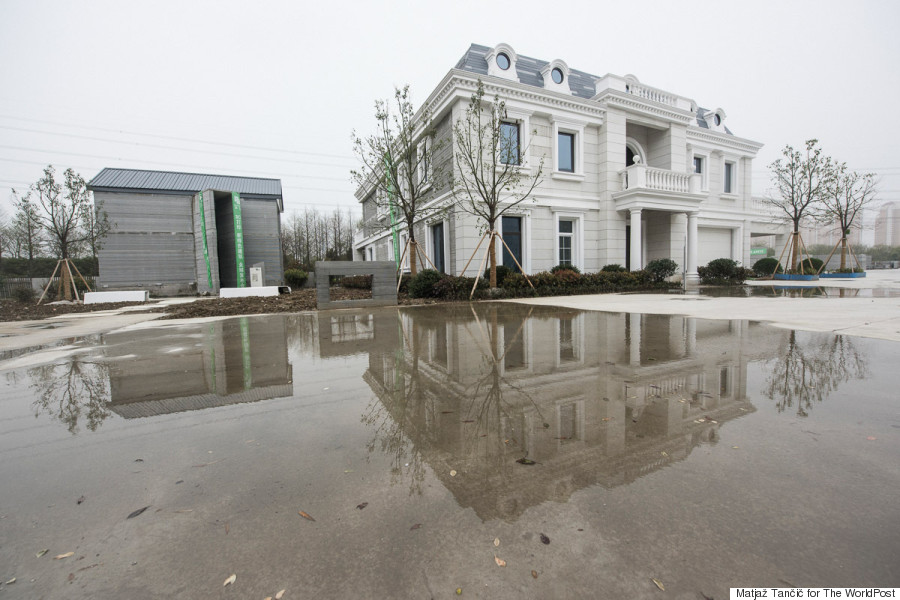 The company at the center of the controversy got its start as a supplier of construction materials, but made international headlines last year when it unveiled 10 small houses in Shanghai that it had printed in its factory.

In 3-D printing (also known as additive manufacturing) objects are built up layer by layer. A 3-D printer intakes a digital design, and then a moving nozzle deposits successive layers of fast-hardening liquid, with each layer drying before the next layer is set down. 3-D printing allows for greater flexibility in the design and prototyping process, but is usually slower and and more expensive than mass production using molds.

WinSun took the basic concept behind 3-D printing and applied it on a much larger scale, using a cement-like mix of construction waste as the liquid. Structures standing in the WinSun lot bear enlarged hallmarks of 3-D printing -- the walls are composed of hundreds of stacked layers, each about an inch thick and rough to the touch. WinSun says it could smooth out the layers but maintains their original outline to demonstrate the technology. 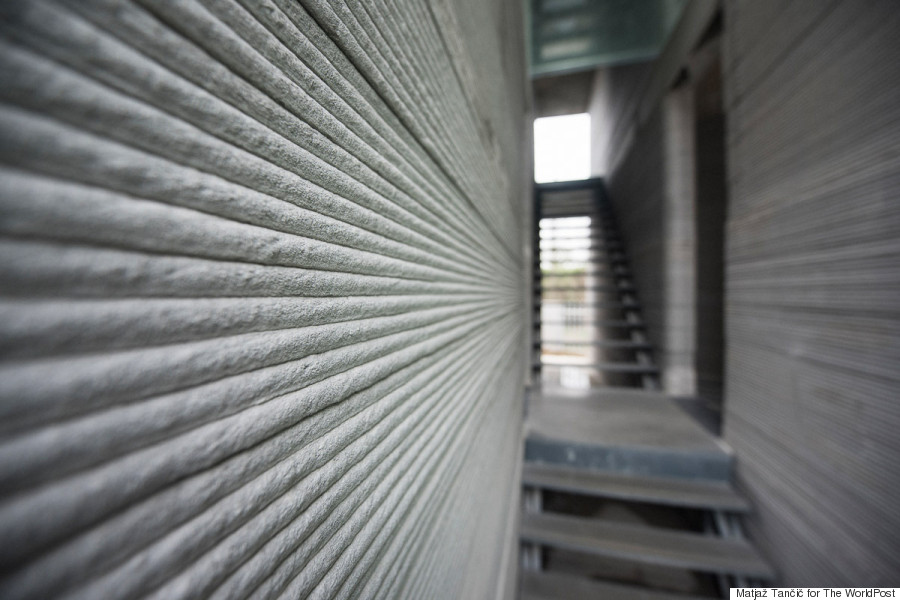 Clusters of empty and roofless structures abut a more polished mansion with some bare bones furnishings inside. WinSun says the mansion’s five-story neighbor is the tallest building ever produced by a 3-D printer, but it has a 100-meter-high tower in the works.

The company says it has already secured orders for its machines from clients in several countries, including a firm that hopes to print out 20,000 affordable houses for the Egyptian government. WinSun won’t divulge the names of its clients, but one employee claimed that the relative of a Saudi prince toured the facilities and was considering ordering a mansion.

In marketing its technology, WinSun emphasizes the environmental benefits of reductions in construction materials (30 to 60 percent, according to some estimates). WinSun CEO Ma Yihe says that in the coming years the company will build “dream factories” around the world, using sand and other construction waste as the main ingredients in its liquid. Ma says WinSun has already begun construction on a handful of factories in China and one in Dubai. 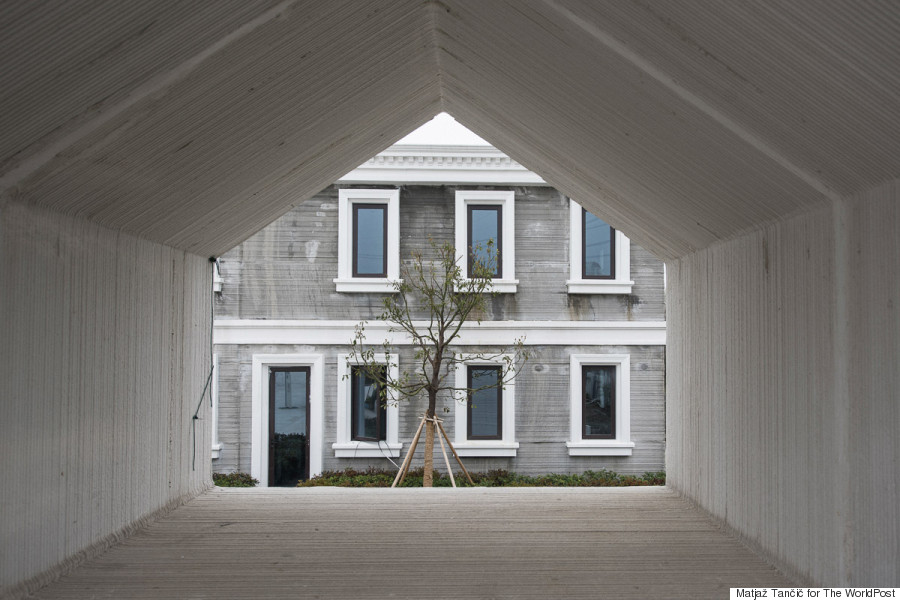 Most appealing to Chinese developers is the labor-saving nature of the machines. After three decades in which China’s number of migrant laborers reached into the hundreds of millions, recent labor shortages have led to wage hikes. On a recent Friday, Xu Feng, a real estate developer from a neighboring province, wandered the WinSun lot, asking for cost specifications and taking pictures with his iPad.

“Right now the biggest problem in real estate is migrant workers,” Xu told The WorldPost. “If this can replace migrant workers, then it’ll definitely be the trend of the future. Absolutely.”

According to WinSun, the company’s 3-D printer is 150 meters long, 10 meters wide and 6.6 meters tall. It can allegedly crank out at least one story of a building each day, and these component pieces are then assembled and stacked on site. WinSun doesn’t allow anyone to view its machine or production processes, citing concerns over intellectual property. 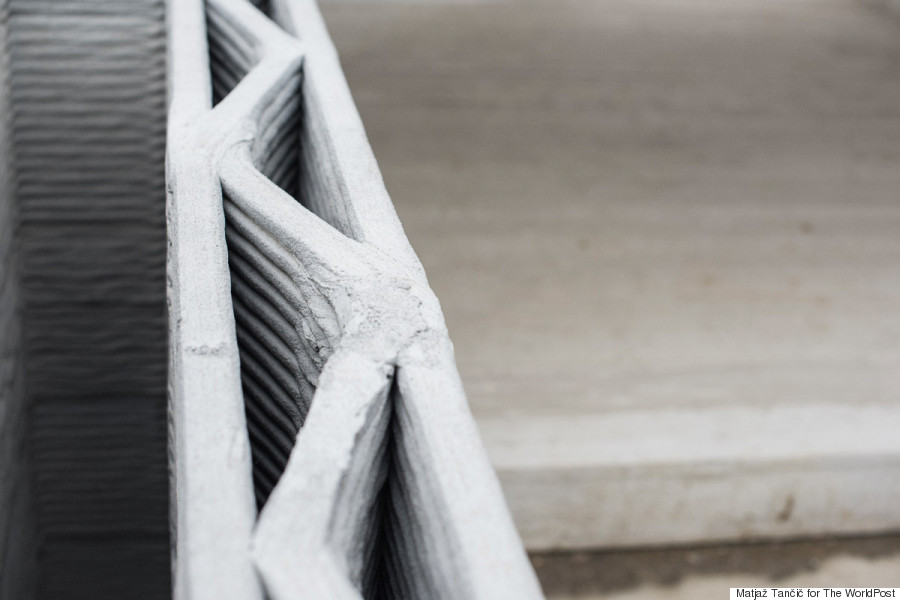 Those are precautions Dr. Behrokh Khoshnevis didn't take. Khoshnevis, a professor at the University of Southern California, pioneered a 3-D printing technique for concrete known as Contour Crafting. That technique recently won a major award from NASA, and based on video recordings, it appears strikingly similar to techniques employed by WinSun. The similarity is no accident, according to Khoshnevis.

“WinSun basically copied my patents, infringed on my patents,” Khoshnevis told The WorldPost.

“He showed me materials and asked me to show him the consistency and all that,” says Khoshnevis. “I showed him a lot of things thinking he was going to supply material.” 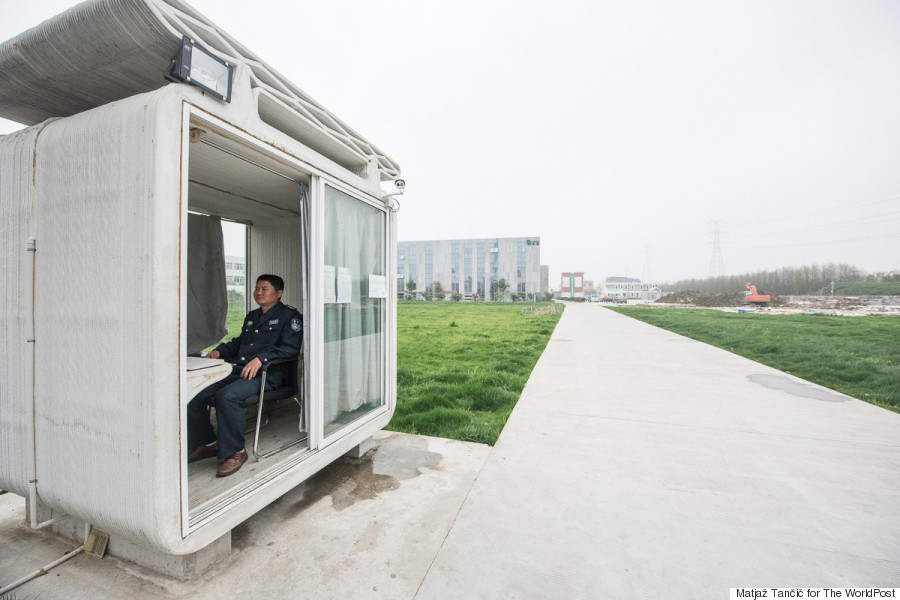 WinSun’s CEO says Khoshnevis isn’t pursuing legal action because he has no basis for his claims. Ma says WinSun developed the crucial liquid entirely on its own, and points out that Khoshnevis and his team have yet to build a complete structure.

“I don’t know what kind of intellectual property he has and I don’t really understand the things he’s done because there isn’t anything there,” Ma told The WorldPost. “What does he have that we could look at? Nothing. What does he have that we could learn from? Nothing. Even if we wanted to learn from his stuff, there’d be no way for us to learn.”

Khoshnevis says he has been working on Contour Crafting for 20 years, and he claims that he could have produced WinSun-like structures as early as 2004. But to-date he hasn’t been able to complete a full structure because of funding limitations and U.S. liability laws.

“We cannot build a structure out in the field without having a permit from authorities,” Khoshnevis explains. “If we build something and some homeless guy goes and lives in there and they have an earthquake, then I would be liable.” 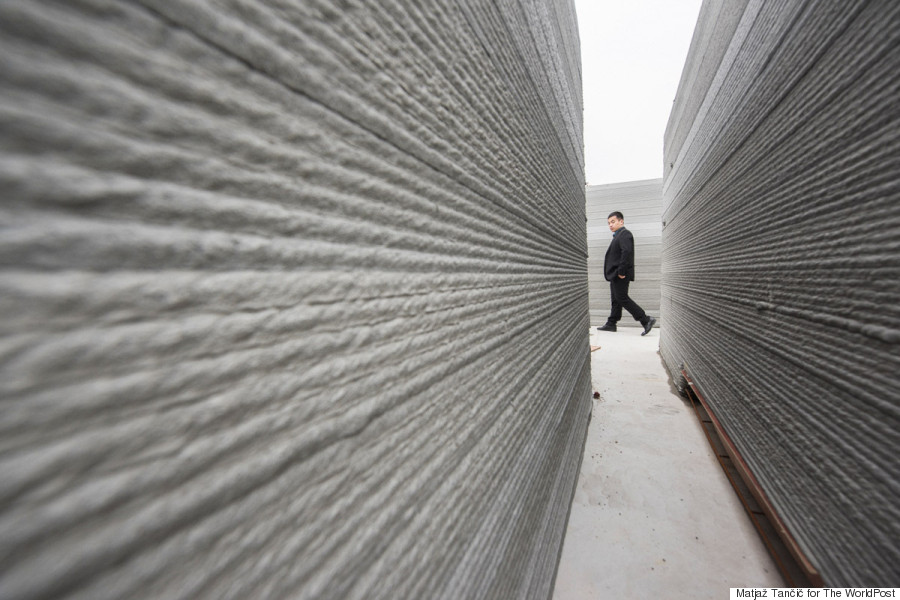 Those concerns haven’t held back WinSun, and the company’s first-mover status has brought huge amounts of publicity. Khoshnevis and some experts in the field maintain that WinSun’s structures aren’t earthquake resistant, but in January the company’s structures received the thumbs-up from the lead engineer at a major state-owned construction company. Ma claims that the companies' first structures already have people living in them.

Those people are “very brave,” according to Lei Yu a Harvard-educated architect who now conducts research and produces 3-D printers in Beijing. He argues that major problems exist in maintaining stability between printed layers in the event of an earthquake. 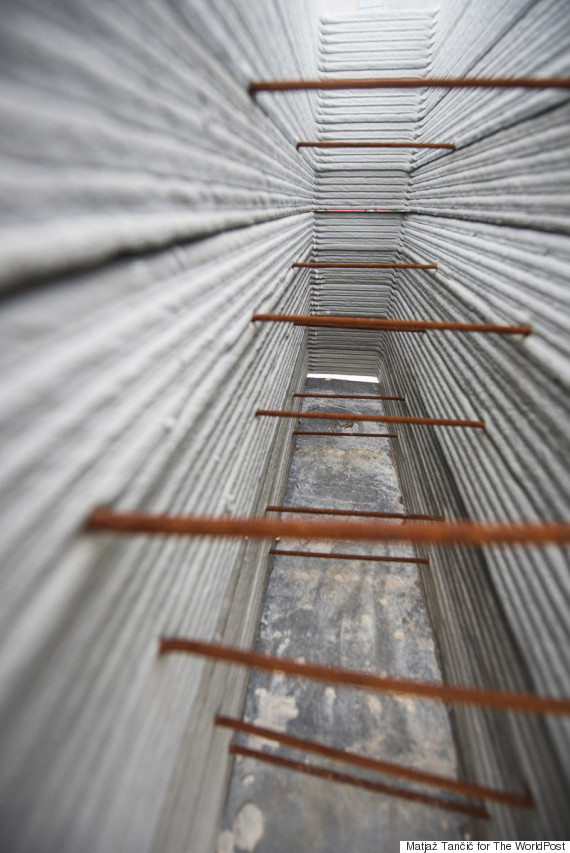 Yu has extensive experience in both architecture and cutting-edge 3-D printing, but he says for now the fields are tangentially related at best. While 3-D printing is helping architects build models to better conceptualize organic and non-linear structures, Yu and other architects say we’ll likely see traditional homes put together by robots before we see 3-D printers popping out finished structures.

In the meantime, both Khoshnevis and WinSun are forging ahead. Khoshnevis says he is now forming a company and acquiring the factory space that will allow Contour Crafting to finally produce finished structures. Ma claims he welcomes the competition.

“We hope they’ll produce something and give us an opportunity to learn,” Ma said. “But so far we haven’t seen it and he hasn’t contacted us.”