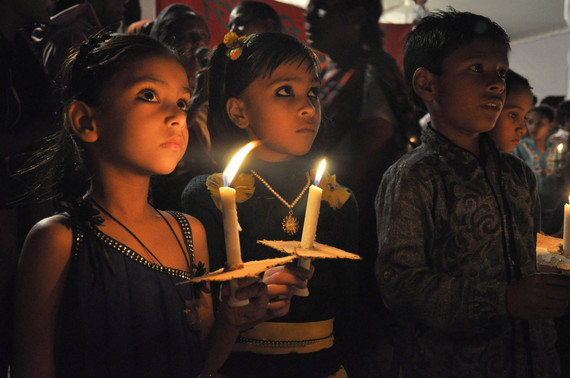 Photograph by Bhopal Medical Appeal
The Sambhavna Clinic in Bhopal, India is an oasis of healing. Combining Western and traditional healing philosophies, the clinic empowers people to take responsibility for their own health. Clinic staff and patients maintain a healing garden where patients learn about the medicinal qualities of plants and then take home a plant to remedy some of their health problems. Satinath Sarangi, the clinic's director, says that "people take care of the plants and the plants take care of them."

All this, while sitting a quarter mile from the site of one of history's worst industrial disasters.

Just a short distance away is the rotting hulk of the Union Carbide pesticide factory. Thirty years ago the factory exploded, sending a poisonous cloud across a city of one million people as they slept in their beds. In one night of terror, thousands died and half a million people were injured.

Rightly called the "Hiroshima of the Chemical Industry", the abandoned factory still leaks poisons into the surrounding neighborhoods and children continue to be born with high levels of birth defects. Dow Chemical, the company that bought Union Carbide in 2001, claims it did not inherit Union Carbide's liability for Bhopal and refuses to clean up the Bhopal site or pay for any ongoing medical care for survivors.

I have travelled to Bhopal more than a dozen times since that day 30 years ago. First to work with community members to establish the healing clinic and later as part of a global movement to exact justice and relief from those responsible and ultimately perhaps draw some larger benefit out of the pain and suffering that so many Bhopalis still endure.

Justice has proved elusive to date. But anniversaries are an opportunity to look back on the journey and see what progress has been achieved, what lessons have been applied and where history seems poised, even determined, to repeat itself. And so, what have we learned?

1. Chemicals can permanently damage children in the womb and in early childhood.
When the Bhopal disaster happened, our understanding of early-life chemical exposure was primitive at best. This is one reason the compensation awarded to survivors was so paltry (around $500 for permanent injury). The Indian Supreme Court judges had no idea those chemicals would lead to a cascade of negative health effects across multiple generations.

Now we know that very small toxic exposures in the first thousands days of childhood development can contribute to stunted brain development in children, including loss of IQ points, learning disabilities, and other neurological damage.

2. The petrochemical industry operates in a moral vacuum.
Rather than acknowledge their tragic mismanagement of the Bhopal factory, Union Carbide avoided criminal liability by crafting a story about a disgruntled employee that caused the disaster. They also downplayed the toxicity of the chemicals that blanketed Bhopal and its residents.

Over the last 30 years, the petrochemical industry has followed the same playbook, denying the damage it causes and actively opposing any regulations that would rein in their continued trespass into our air, our water, our food, and our bodies.

Without compelling the polluters to pay for the damage they cause, there are no signals in the market to support the transition to the economy built on renewable energy and green chemistry.

3. We need to kick our addiction to toxic chemicals in order to survive and thrive.
Left to its own internal logic, we have learned the petrochemical industry will risk the future of life on the planet in order to continue to seek private profit. Without the passage of international regulations to protect citizens, there is little hope that our children will inherit a world where they can grow up healthy and thrive. Without political action, we will continue to experience the epidemic of toxic chemicals that plague our global community and witness the effects of runaway climate change.

4. We need an international movement.
Run by survivors, the Sambhavna Clinic offers a hopeful vision of what can happen when people take their health and their destiny into their own hands and seek to heal their own community. We're seeing the same thing happen around the world - people are standing up for their rights to a healthy environment and are building communities where health and business go hand-in-hand.

What can we learn from this disaster? Since Bhopal, we have come to understand just how large a role the environment plays in determining our health. But more importantly, we know that another world is not only possible, it is being born in communities around the world. This is the best hope for survival: If we listen to the Earth and take care of it, it will take care of us.

Gary Cohen is the co-founder and president of Health Care Without Harm and member of the International Advisory Board of the Sambhavna Medical Trust in Bhopal, India.